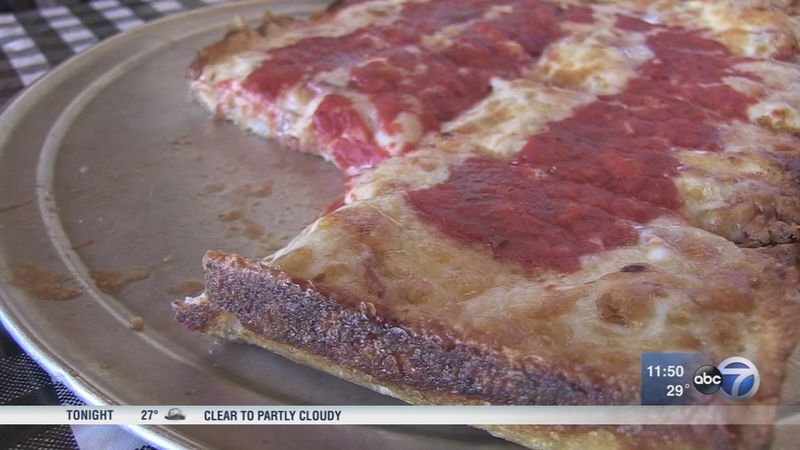 CHICAGO (WLS) -- We all know how serious Chicago is about its pizza, but there's a relatively new type of pizza making inroads here: Detroit-style.

It was created just a few years after Uno's launched deep dish here, and our Hungry Hound said the motor city's version has some similarities and some differences.

Newsflash: Chicago isn't the only town that claims deep dish as its own. Detroit-style means baked in a rectangular or square blue steel pan, with walls a good two inches high.

The difference is the cheese - both the type and amount used - as well as the architecture of this unique pie. Its roots can easily be traced to Sicily, so that's where we begin our story.

The large, rectangular pizzas that emerge from the ancient ovens at Sicilia Bakery in Jefferson Park, are a familiar site to many Italians. Here, classic means homemade sausage scattered onto fresh tomato sauce, all buried beneath shredded mozzarella and baked in a shallow, rectangular pan. This style greatly influenced the entrepreneurs of Detroit, where, in 1946 - three years after Uno's started in Chicago - Buddy's opened for business in Hamtramck.

"Detroit-style pizza first and foremost is square," said Wesley Pikula, the Vice President of Buddy's. "The actual blue steel that this was made out of imparted a flavor because, like an old skillet or a hand-pounded wok or things like that they create their own baking properties."

The pans were key for scrap metal, a byproduct of the auto industry. The ingenuity was Sicilian. Dough was left to proof in the pan with cheese and meat already on it.

"Which is similar to Sicilian-style, where you put the meat into the dough, then you would bake. So it has that origin. So it's dough, pepperoni, then the brick cheese then it's allowed to proof at that point - it can be anywhere from an hour to three hours," said Pikula.

Then they add more Wisconsin brick - all the way to the edge - as well as a few racing stripes of tomato sauce. Into a conveyor oven for about 20 minutes, until it emerges bubbling and crisp underneath. Cut into large squares, gotta have a burnt cheese collar around the edge as well.

Recently, a few Detroit transplants have been inspired to recreate their childhood memories here. At Longacre, in Sheridan Park, brick and white cheddar are combined in about a half-dozen options.

"The Sicilian crust on the bottom, the cheese is part of the first baking and then we do the racing stripe of sauce on top," said Andy Kalish, the Owner of Longacre.

Kalish also adds cheese and basil as a garnish, making sure each slice has at least two sides with burnt cheese.

"All of our squares come with two corners," he said.

At Union Squared in Evanston, Buddy's influence is obvious.

"I went there, we had the pizza and I was blown away; I said I've never had anything like this, so it's my mission to kind of figure out what they were doing," said Vince DiBattista.

DiBattista proofs his dough in a pan, adds two parts skim, one part brick, then his pepperonis. Into the oven it goes, until that bottom is golden brown and crisp. He then removes the pizza, cuts it into squares, transfers to a wire rack so air circulates and keeps the bottom crisp, then sauces it just before serving.

"The cheese is brought all the way out to the edges and caramelizes around the edges. Sauce goes on the top, and it's thick yet it's light and crispy underneath," he said.

In Steve's Extra Course, he heads back to Detroit, where he has lunch in Corktown, at Slows Barbecue, and talks about some of the highlights there in the neighborhood.

In Steve's Extra Course, he heads back to Detroit, where he has lunch in Corktown, at Slows Barbecue, and talks about some of the highlights there in the neighborhood.