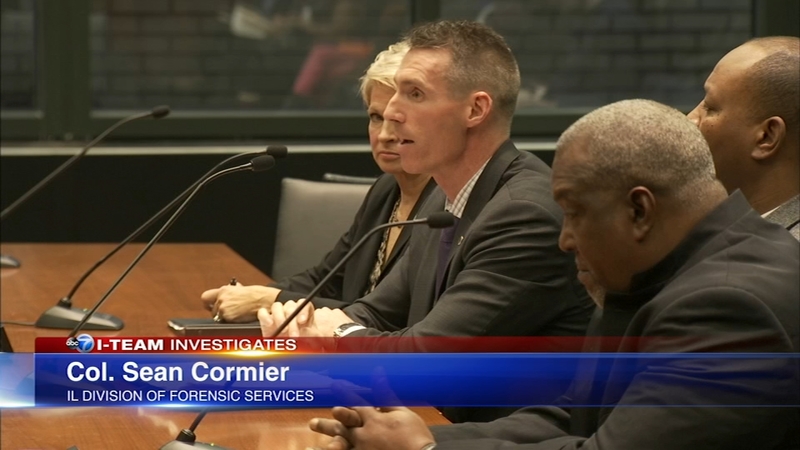 CHICAGO (WLS) -- State officials held a public hearing Monday after an ABC7 I-Team investigation revealed that a backlog in DNA evidence is has stalled 750 murders from being solved.

The Illinois Forensic Science Lab is still analyzing DNA from more than 750 Chicago murder cases from the last three years, according to a Freedom of Information Act request submitted by the ABC7 I-Team and acknowledged by Sen. Patricia Van Pelt, D-Chicago.

Van Pelt, who chairs the Senate Public Health Committee, called for Monday's hearing at the Bilandic Building in the Loop to hear from families and community activists impacted by the backlog, but also state officials to get answers.

"The last thing we want are murders walking around feeling real happy about killing people and getting away with it," said Van Pelt.

For more than an hour, Illinois State Police Forensic Department officials answered questions and admitted that the problem is growing. An increase in cases, low staffing and a lack of communication between the labs, law enforcement and the legal community were the reasons the Illinois State Police said their backlogs began ballooning in 2010.

"We are absolutely not happy with the backlog and are doing everything we can, working hard every day, to address this issue," testified Col. Sean Cormier, of the Illinois Division of Forensic Services.

State police also said they have an overall crime backlog of 13,390 cases. They estimate that, with increased staffing, it will take 5 years to eliminate their backlog.

Funding would be the next challenge. Van Pelt said she plans to be a fierce advocate for that in Springfield. She plans to hold another hearing on the matter in the spring.

"There is a lot of people that are concerned. It's just that, we didn't even know that the analysis was that far behind. We didn't know it was years late. That has come to the light. We're putting it on the front burner so we can change that. Whatever needs to happen, we want to make it happen," Van Pelt said.

Last month, Carmia Tang said her son Jeremy's case has still not been processed. He was murdered in September 2017 and she said that the "The DNA may give justice."

On Monday, she echoed those concerns to state leaders.

"It started about Jeremey and I wanted to fight for Jeremy but it's so much bigger than that now. It's about everybody," Tang testified.
Reginice McBride lost her son, 36-year-old Ronald James, last year. The father of five was shot in the head during a robbery near the United Center while he was in his car.

McBride said she's spent sleepless nights waiting for his case to be solved and has been told that police have DNA evidence on a shirt and a mask that two of the three assailants were possibly wearing.

"It's a feeling of distrust. I don't trust them. I feel like they can get it out and it depends on whose case it is. It's like my son's life or my son's case is not that important to them and a lot of other children. If we're not high-profile cases, then we're nobody," McBride said.
Report a correction or typo
Related topics:
politicschicagoloopcrimemurderchicago crimednai team
Copyright © 2021 WLS-TV. All Rights Reserved.
RELATED
Hundreds of Chicago murders may remain unsolved due to DNA processing delays
I-TEAM
Scammers use QR codes to embed malicious links
I-Team: Holiday Flight Rights
Crest Hill couple, 72 and 62, plead guilty in Jan 6. Capitol case
Jelani Day' family attorney calls for FBI to investigate
TOP STORIES
Parents charged in school shooting arrested, plead not guilty
Families protest as school cancels all activities amid COVID outbreak
Passenger jumps out of plane taxiing at Phoenix airport
COPA investigates shooting that injured off-duty Chicago cop
Women robbed while volunteering for My Block, My Hood, My City
1st case of Omicron variant reported in Wisconsin
$1M in stolen retail items recovered from storage units: AG
Show More
NIU wins MAC championship
12 shot, 4 fatally, in Chicago weekend violence: CPD
Fallen Sterling firefighter 1st to die in line of duty
CNN fires Chris Cuomo following suspension, investigation
Biggest, brightest Christmas tress in the US: LIST
More TOP STORIES News