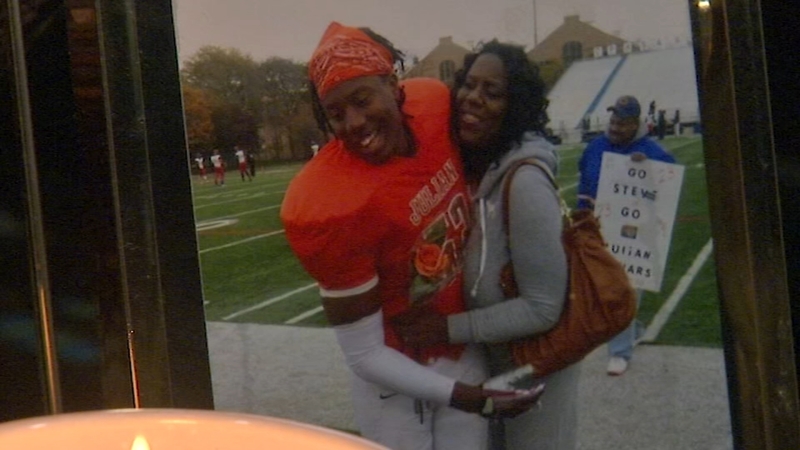 CHICAGO (WLS) -- The ABC7 I-Team looked into delays in processing DNA at the Illinois Forensic Science Lab that one state senator said could be allowing people to get away with murder in Chicago.

Covering the last three years, there are more than 750 Chicago murder cases from the last three years halted at the state forensic lab which is currently analyzing DNA. The I-Team uncovered these numbers after a mother of a murder victim emailed them about her son's case, wondering why the DNA evidence had not been processed.

One year and two months later, Tang said she's still waiting on DNA test results from the murder scene of her only child.

When Consumer Reporter Jason Knowles sat down with Tang recently, he wondered how frustrated she is with the delay.

"I'm very frustrated, just to know someone that killed my child is walking around free and they could possibly kill someone else and put someone else through the pain I've been through," she said.

Jeremy Tang, a 20-year-old college student, was active and vibrant. He danced and had fun with his friends. But Tang didn't live to see 21. He died after being shot in the chest in the 800-block of 102nd Street while he was in the driver's side of his vehicle.

"Well, you might have someone who touched a car door, or touched a car window, but besides the prints their actual physical DNA might be on the prints," Carmia Tang explained. "So if that person has DNA in the system already and they swab the car or they swab that person's body or item in the area of the murder, that could lead to an arrest."

Tang said detectives told her that "higher profile" murders could be processed faster.

"I know they have a lot of cases murder cases, and everyone should be treated with the same respect and the same speed of processing evidence. My child might not be high profile in the news, or high profile to the media, or to the police, but he's high profile to me," she said.

After learning of her case. the I-Team started searching for answers with the Chicago Police Department. They directed us to Illinois State Police, who are in charge of the state's nine crime labs and the processing and testing of DNA.

Under the Freedom of Information Act, we asked for "the number of Chicago murder cases" form 2014 until present, where the crime lab is "currently analyzing DNA."

"And that evidence might be there just sitting there?" Knowles asked 5th District State Senator Patricia Van Pelt (D).

In 2017, Chicago police say 17 percent of murders committed that year were solved .

"And that means there could be 750 murderers walking around in Chicago right now," Knowles asked, "And possibly killing again?"

The I-Team shared their data with Sen. Van Pelt, who is active in her community, questioning the low rate of solved murder cases in the city.

"And it probably has a lot to do with the information you are sharing right now," she said.

Chicago Police say that only in 2017, 17 percent of murders were solved. And for murders committed so far in 2018, there is also a 17 percent solve or cleared rate. Police have cited the lack of cooperation, or a code of silence in communities. But the DNA delay could also be a factor.

"As a state senator I have a responsibility to dig deeper into this issue and find out what it is the crime lab needs and help them get it," Van Pelt said.

Illinois State Police would not comment, even after being asked if there was any response to criticism of the numbers of active murder cases being analyzed.

Former FBI agent and ABC News security consultant Steven Gomez considers the data we uncovered to be a high number of cases categorized as "currently" being analyzed, although he says some could be waiting on additional evidence.

"If they are just waiting for additional DNA matches to come in from other individuals or other cases then that can be an explanation," he said.

According to this state police's 2018 Testing Accountability Report, the total number of backlogged cases for all crimes is a shocking 12,915.

The report points to limited resources, saying the current staffing level is "insufficient" and the procurement process for new equipment "exacerbates the delays". It says vendors threatened to stop providing goods due to payment delays, although that situation improved late in the fiscal year, and that "...high backlogs equate to an increased risk to public safety as criminals remain unidentified and able to commit additional crimes and innocent individuals remain incarcerated..."

"What I hear mostly from the residents in our community is that they think no matter what happens, whether the crime is committed in broad daylight or in the middle of the night, that it won't be solved, that people are getting away with murder," Sen Van Pelt told the I-Team.

But a year and two months later Tang said she won't quit until results connected to her son's case are in.

"I don't think there's a day I don't wake up and think about him, I cry every day. Not just me, I want to help other people, too, to receive justice. We can't bring these children back but we can fight for justice and try and get some of these criminals off the street," she said.

Senator Van Pelt says she plans to hold a special committee to try to get to the bottom of the DNA delays. The I-Team will continue to cover this issue and update you on any developments to how fast DNA is analyzed. They will also provide updates if and when the DNA results come in for Tang's case.