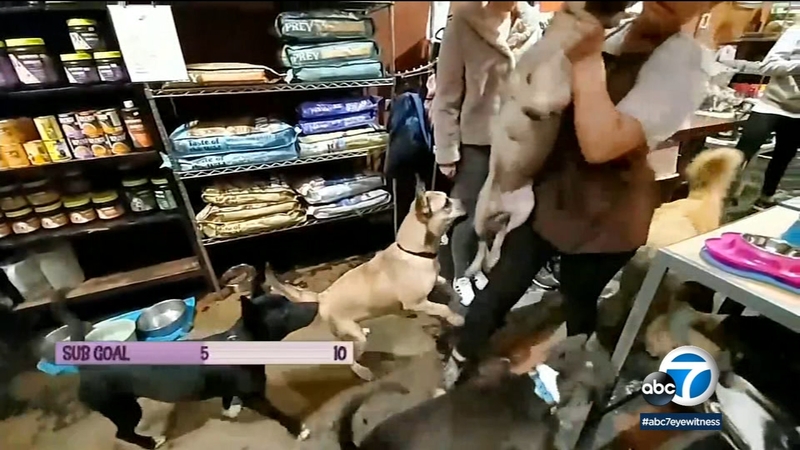 The incident happened Wednesday at the Bark n' Bitches Dog Boutique located at 505 N. Fairfax Avenue in the Fairfax District.

A Twitch user, Royce Thomas, happened to be livestreaming inside, when she says an employee grabbed a rambunctious dog and threw it across the store.

The woman can be seen forcibly grabbing a dog by the back of its neck before tossing it to the ground.

Witnesses in the video can be heard saying that the dog landed directly on its head when it hit the pavement.

"The dog basically got launched from its head, and it was upside down in the air, and came down on its head," Thomas said.

Bark n' Bitches released the following statement in response to the incident:

"There was an inexcusable incident in the shop tonight. We will not tolerate this or any actions that put our rescues in harms way. The appropriate actions are being taken. This is NOT what we stand for."

On its website, the store calls itself "L.A.'s first HUMANE Pet Shop."

The visibly shaken dog hid under a bench as the employee in question went running to the back of the store.

Thomas says she never saw that employee again as the manager held the puppy and tried to calm stunned customers.

Thomas says she hopes the employee who threw the dog doesn't continue working there after the incident.

"I hope that the woman who launched the dog is no longer on staff there and can't work with animals moving forward," she said. "And I would like to see the dog get a home."

Thomas said she hasn't filed a police report, but other people in the store and some of her followers have contacted police.