Drag queen Panda Dulce said the group shouted 'tranny' and 'pedophile,' which 'totally freaked out all of the kids.'
WLS
By Tim Johns 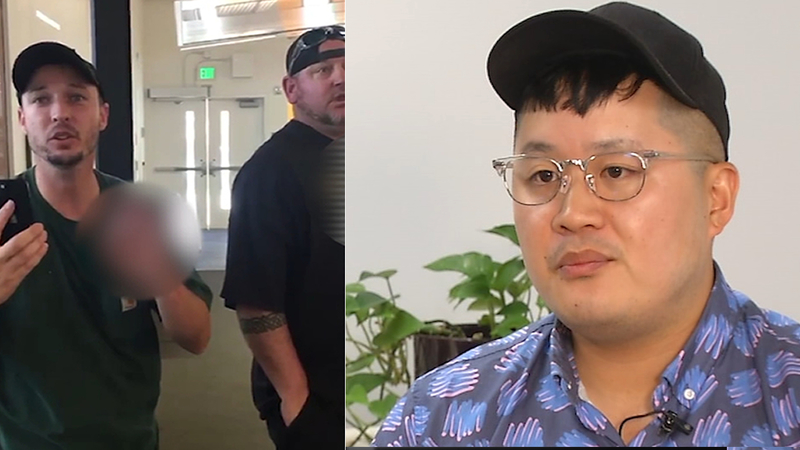 Deputies responded to the San Lorenzo Library Saturday afternoon following reports of a disturbance during the reading for preschool-aged children in celebration of Pride Month, said Lt. Ray Kelly with the Alameda County Sheriff's Office.

The host of the children's story program, Bay Area drag queen Panda Dulce, told our sister station KGO that the group disrupted the event, shouting "tranny" and "pedophile." The disruption "totally freaked out all of the kids" and the group "attempted to escalate to violence," Dulce wrote.

"They said, 'Who brought the tranny? It's a groomer. It's a pedophile. Why do you bring your kids to this event?'" Dulce said.

Yesterday, a group of Proud Boys stormed a children’s story time event in San Lorenzo. It was held by the public library & Bay Area drag queen Panda Dulce. I sat down with Panda this evening to talk about the experience and will share the story tonight at 11 on @abc7newsbayarea pic.twitter.com/L8GTUupLwn

We’ve blurred some of the video to hide white power signs & also offensive clothing. The Alameda County Sheriff’s Office is investigating the incident & has initiated their “hate crime protocol”. @abc7newsbayarea

Dulce, who is Ivy League-educated and has over a decade's worth of experience in social work, said many of the children in attendance were terrified.

No arrests have been made, no one was physically harmed, and sheriff's officials are investigating the incident as a possible hate crime and harassment of children, the San Francisco Chronicle reported.

"It appears the group of men may be affiliated with the Proud Boys organization," said Kelly, adding that the five men involved were wearing the black and yellow colors associated with the far-right group.

Idaho police officers on Saturday arrested 31 people who are believed to be affiliated with the White nationalist group called Patriot Front, after they were seen gathering near a Pride parade in the city of Coeur d'Alene, police said.

Kelly said the sheriff's office plans to post deputies at future story-hour events at the library "to deal with any disruptors."

Yet Dulce is determined not to let fear and intimidation hinder future events.

"They were successful in scaring us, but they weren't successful in their ultimate goal, which is to make us go away because of their own discomfort with the diversity of our world. They failed in that," Dulce said.

In Idaho, more than two dozen members of a white supremacist group were arrested near a pride event. Police say the 31 Patriot Front members had riot gear and were seen loading people into a U-Haul at a hotel parking lot in Coeur d'Alene, Idaho. Among those arrested was Thomas Rousseau of Grapevine, Texas, who has been identified by the Southern Poverty Law Center as the 23-year-old who founded the group.