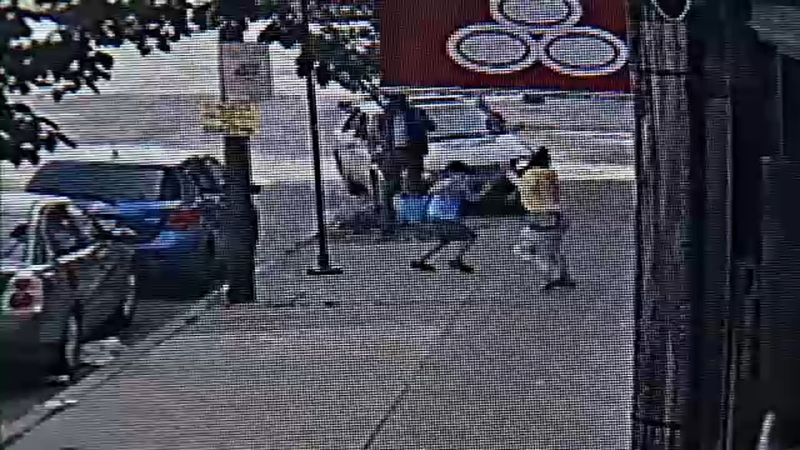 Driver cited in Humboldt Park crash that injured 2, including child

CHICAGO (WLS) -- A 64-year-old man has been issued citations after his car jumped a curb, crashing into people on the sidewalk outside a church in Chicago's Humboldt Park neighborhood Saturday.

Surveillance cameras were rolling the moment the car hit a man standing on the corner around 11:15 a.m. in the 4200-block of West North Ave on the city's Northwest Side.

An 8-year-old boy and a 61-year-old man were injured in the incident, according to police.

The man didn't see the car coming, but a Good Samaritan nearby saw the incident and rushed in to help.

Right behind the man hit by the car was a child and his mother who were barely able to jump out of the way.

"The young boy was hollering and screaming. He said, 'my foot, my foot,'" said Good Samaritan Jose Sosa recalled. "She pulled her son away. He was about to get hit at any minute. She saw it coming."

Sosa works at a nearby barbershop where their outside security cameras captured the crash.

Sosa said he could hear the boy's mother was screaming for someone to call 911.

"I had to run back inside to get my phone just to call them because everyone was just standing around shocked," he said.

At the time, Sosa said he didn't know about the third victim. Paramedics arrived quickly and all three were taken to a hospital.

"I hope that the kid is doing good and the pedestrian that really got hit, we know him; he comes around a lot here. He is an older man and I hope that he is OK," Sosa said.

Sosa describes the driver as an older man and police are looking into what led up to this accident.

"It could have been this barbershop," Sosa said. "It could have come straight through. We don't know what transpired for him to do that."