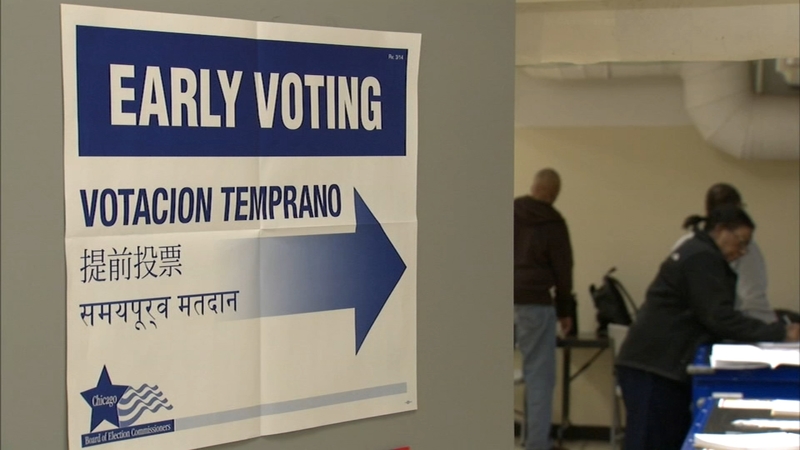 This comes as the race for mayor continues to heat up ahead of the April 2 Election Day.

"I reviewed each of the candidates and I picked the one that I thought would do best for Chicago in the next few years," said early voter Mark Gregor-Pearce.

Mayoral candidate Lori Lightfoot sat down with ABC7's Craig Wall with five weeks to go until the April 2 runoff election.

Election Board Chair Marisel Hernandez says the turnout is promising for the historic election.

"There is strong interest in this election," she said.

Officials said the large number of requests for vote by mail ballots shows a large spike in the number of voters between the ages of 25 and 34 years old.

Voters who are casting their ballots by mail must register by next Wednesday.

"We already have 43,000 applications to vote by mail, more than half of those coming since this past Wednesday," Hernandez said.

As the race for mayor continues to heat up, contests for city treasurer and alderman in 15 of the city's wards are also underway.

Officials believe now having a smaller list of candidates to choose from has renewed interest.

"If you don't get out here and vote, other people are going to make the decision for you," said early voter Timna Axel.

Over the weekend, more endorsements were announced for the Lightfoot campaign, including Congressman Chuy Garcia, who threw his support behind the candidate.

Toni Preckwinkle walked in the Northwest Side Irish Parade and attended church services with Illinois Secretary of State Jesse White.
The Board of Elections is also sending out vote by mail ballots. If you want to vote by mail, you need to register by next Wednesday.

The deadline for returning your ballot is March 28. For more information, visit chicagoelections.com.

RELATED: The Race for Chicago Mayor: The People's Forum

We are partnering with the League of Women Voters and Univision for a candidate forum on Wednesday, March 20, at 6 p.m.