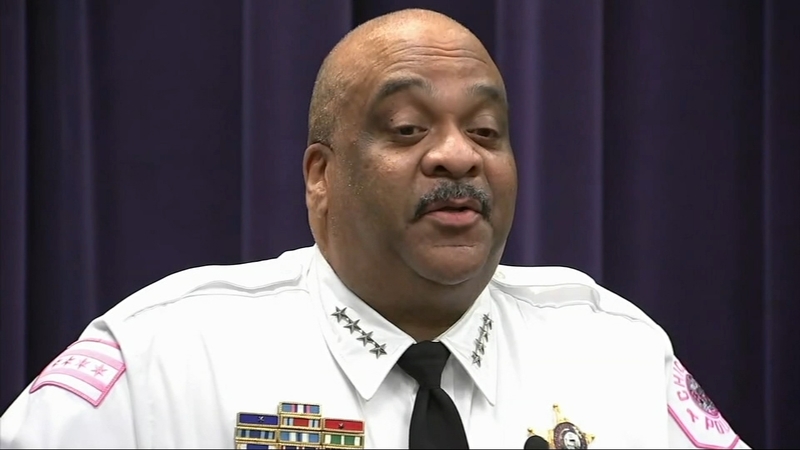 Lightfoot was visibly upset while making the announcement. She said her decision came after an internal investigation into the night Johnson was discovered asleep in his police-issued SUV at a stop sign in October.

"The finding of the inspector general's report regarding Mr. Johnson, which I recently reviewed, makes clear that Eddie Johnson engaged in conduct that is not only unbecoming, but demonstrated a series of ethical lapses and flawed decision-making that is inconsistent with the privilege of leading the Chicago Police Department," Lightfoot said.

WATCH: Lightfoot says Supt. Johnson had a 'couple of drinks' before medical episode

Lightfoot was referring to Johnson's account of what happened in the early morning hours of October 17, when he was found asleep behind the wheel of his police SUV.

Johnson blamed medication issues for the incident. It later came out that he had actually been drinking and dining with friends - facts made public by Mayor Lori Lightfoot after she had a conversation with the superintendent.

Lightfoot declined to go into detail about the incident, saying it would not be fair to Johnson's wife or children. She also said this needs to be a turning point for the Chicago Police Department and the culture there. She has reviewed body cam video from that night, but declined to comment on it so as not to influence the Inspector General's report.

Multiple news outlets are reporting that Johnson on that night in question was seen drinking for several hours at a downtown bar with a woman who's not his wife. In addition, the Chicago Tribune is reporting that when he was later approached by officers in his vehicle, he flashed his star and drove away.

Johnson announced his retirement on November 7. He has served as a Chicago police officer for 31 years, and as superintendent for three and a half years.

Interim Superintendent Charlie Beck, whom Lightfoot appointed last month, arrived at Chicago police headquarters Monday afternoon. He was not set to take over until Johnson's scheduled retirement date of January 1, but his role now takes on a new sense of urgency.

READ: Mayor Lori Lightfoot's full statement on the termination of Supt. Eddie Johnson:
"Today, I am announcing that I have terminated Eddie Johnson's employment with the City of Chicago, effective immediately. Upon a thorough review of the materials of the Inspector General's ongoing investigation, it has become clear that Mr. Johnson engaged in a series of ethical lapses that are intolerable. Mr. Johnson was intentionally dishonest with me and communicated a narrative replete with false statements regarding material aspects of the incident that happened in the early morning hours of October 17. Had I known all the facts at the time, I would have relieved him of his duties as superintendent then and there. Perhaps worst of all, Mr. Johnson has misled the people of Chicago. The 13,400 sworn and civilian members of the Chicago Police Department who work hard every day deserve a leader who they can believe in. In public life, we must be accountable for our actions and strive to do better every day. And to achieve the reform and accountability in the department that we know is urgently needed, we require a leader whose actions reflect the integrity and legitimacy of what it means to be a Chicago Police Officer. I am confident that incoming Interim Superintendent Beck is such a leader, and that both he and the eventual permanent superintendent will serve with honor."

Monday may be the end of Eddie Johnson's run as superintendent of police, but it isn't the end of the investigation of what he did, how it happened and the effect on him and possibly others.

"Something clearly came to light through that investigation that the mayor saw, that led her to the conclusion that she cannot do anything other than drop the boom right now," said ABC7 Legal Analyst Gil Soffer.

The Inspector General's investigation is ongoing, and the full scope of what happened with Johnson is not known.

"We're all left to guess a little bit what seems clear is that he lied to her so we can guess that maybe it was serious intoxication which was clearly different from what evidently he had said to her work to the public, frankly, it's hard to imagine anything else that might have been," Soffer said.

"It seems clear that he lied and he lied in a very blatant way. I don't think [Lightfoot] had a meaningful choice, politically, certainly, other than to do what she did," he added.

But what about possible criminal charges? Is Johnson just unemployed, or in legal jeopardy as well?

Were others Involved in the October incident or Johnson's account? Perhaps his personal associates or some CPD colleagues?

"There clearly has been continuing investigation into other police officers, there would be risk, and they would face exposure, if they weren't doing their job properly if they didn't apply the techniques that they normally do with someone who could be suspected of driving while intoxicated and certainly if they lied about what they saw in police reports," said Soffer.

And will the former superintendent's city pension take a hit?

"The city can pull it from him, but only if they find that he was convicted of a felony and if the felony arose from or was connected to his service as an employee. So there's a lot of hurdles that have to be cleared before the city would have a right to revoke his pension," Soffer explained.

Johnson's firing does reduce his pension, slightly, but not because of the circumstances. It's simply a matter of timing. His pension is calculated on the last decade of compensation, based on the four highest-paid years and Johnson needed another few months to make four years as superintendent.

Mayor Lightfoot has made it clear to many at City Hall that she will not tolerate being misled or lied to, so her decision to fire Johnson did not come as a big surprise to some aldermen. Some said he should have resigned earlier.

"He should have known everything was going to come out," said 12th Ward Alderman George Cardenas. "If you knew the truth, what happened, it's best for the city to move on and say 'I made a mistake.'"

Others are waiting to get more facts from the Inspector General.

"My assumption is the report that is going to come out by the IG has info that is very damning for Superintendent Johnson," said 35th Ward Alderman Carlos Ramirez-Rosa.

While it may be damning, Father Michael Pfleger said Johnson's entire career should not be judged by a mistake at the end of it. Pfleger has known Johnson since his early days as a beat cop.

"I trust her judgement," Pfleger said of the mayor, "I trust her desire to do what's right for the city, but I also trust Eddie Johnson as a human being that I love and respect.

Pfleger said Johnson made the police department better by working with the community.

In an effort to heal the city after the Laquan McDonald Case, Johnson was one of the rare superintendents who reached out to community activists critical of the police department. Activist Jedidiah Brown met with Johnson often and said he spoke with him this morning after getting the bad news from the mayor.

"He basically expressed a desire for us not to pass any judgement and give him an opportunity to respond, everything may not be as it appears as more details come out," Brown said.

The Fraternal Order of Police, who have had a strained relationship with Johnson, was not surprised by the announcement.

"We understand the mayor's decision on what she is looking for; transparency and accountability within the police department," said FOP President Kevin Graham.

Reverend Ira Acree is among a group of black ministers who thought Johnson was too closely tied to a CPD culture Lightfoot is trying to change.

"Sometimes the coverup is worse than the crime. And she wants no part of it," he said.

The facts will come out when the Inspector General completes his report, which may be in January.