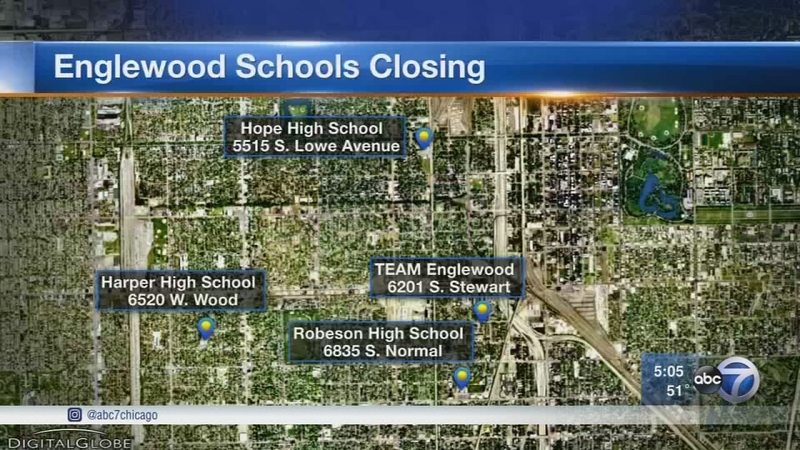 The incident was recorded in a tweet from the Chicago Teacher's Union.

"The whole purpose is to see if we can change the board's mind about closing our school down," said Harper sophomore Javon Hairston. "A lot of people around here want to keep this school open."

According to CPS, enrollment has dropped at each of the schools.

"If these schools have to go, the mayor has to go," said Harper Local School Council Co-Chair Clifford Fields.

Officials said the entire Robeson campus will be demolished to make way for a state-of-the-art, $85 million high school to serve 1,200 students. That school would open in the fall of 2019.

Nearly 400 students would need to switch schools next year under the current plan.

""There is a vision to have a high quality high school in Englewood and the district and the city are actually putting dollars behind that idea," said CPS Chief Education Officer Janice K. Jackson.
But parents, students and CTU members raised concerns about student safety in relation to the plan.

"They are going to be in the line of fire," said Jackson Potter of the CTU. "There is no safe passage that goes for five to eight miles. It doesn't exist, so the mayor is lying about the benefits of this proposal."

CPS closed nearly 50 schools in 2013, a move that also sparked an outcry. Community members said they were involved in the current process but still understand that there are challenges in executing the plan.

"Once we sit down and we talk to the parent and the student, I think we can iron all this out," said Darlene O'Banner of the Englewood Steering Committee. "This transition is going to be okay."

Students at the closing schools said they are worried about next year and what the change means for their future.

"Now I got to go to a new school where I don't know anybody," said Harper junior Jaquan Douglas. "I know everybody in this school - and that's that."