WLS
CHICAGO (WLS) -- In a motion for Preliminary Injunction filed Monday, Chicago Public Schools threatened to end the 2016-2017 school year on June 1 due to budget cuts if the state does not do anything to rectify the school funding formula.

"The next round of cuts almost certainly require CPS to cut even more days from this year's school calendar - ending as early as June 1, 2017," the motion states.

The court papers also said the next round of budget cuts would also likely require CPS to cancel summer school for grade school and middle school students.

CPS CEO Forrest Claypool said in a press conference that started shortly after 4 p.m. that the injunction was filed to ask a judge to move as quickly possible, as the district has very few practical options to balance its budget and preserve its solvency.

But Claypool also said that June 1 is a worst case scenario, and repeatedly resisted journalists when they attempted to get a firm date from him, saying he hopes the courts will step in to prevent the school year from being cut short.

Cutting nearly three weeks out of the school year would save CPS more than $90 million.

"We thought it was fair, obviously, for our parents to be aware of the situation, the latest details. At some point we'll have to make a final decision, but we're not there yet," Claypool said.

Governor Bruce Rauner vetoed a funding bill late in Dec. 2016 that promised $215 million in funding for CPS. Claypool said Rauner knew he was vetoing the bill at a sensitive time in the school year, which would leave CPS very few options to balance their budget, and called the decision "irresponsible."

Rauner vetoed the bill because legislators did not tie pension reforms to that funding bill.

"I don't see how this is his fault. I would hope CPS would come down to Springfield and advocate on behalf of all children," said Illinois Secretary of Education Beth Purvis.

Shannon Breymaier, spokeswoman for Mayor Rahm Emanuel, said in a statement, "Ever since we introduced a longer school day and school year, the graduation rate is at an all-time high and growing and students have made dramatic gains in reading and math - in some cases, leading the country. This is not a coincidence. CPS has been forced into an impossible situation because of Governor Rauner's careless veto. Our first choice, and the right choice, is to have Springfield equitably fund schools and teacher pensions, but while nothing is final and set in stone, CPS has to be forthright about its financial position and its options."

CPS filed a civil rights lawsuit on Feb. 14 on behalf of five families and the school board. The lawsuit alleges the state discriminates against CPS students, saying that while the district's predominantly black and Latino children make up 20 percent of Illinois public school students the district claimed it received only 15 percent of the money the state appropriated for education.

"Our children, 90 percent of color, receive a fraction of the dollars the children in the rest of predominantly-white Illinois receives. It is racial discrimination on a massive scale," Claypool said.

"What I would say is that under Governor Rauner, Chicago Public Schools have gotten more money than they would have gotten if the General Assembly had continued funding schools the way they did under Governor Quinn," Purvis said.

She did not expand on what she meant. 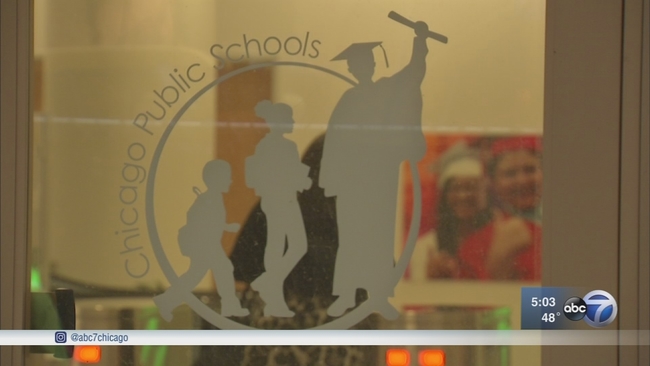