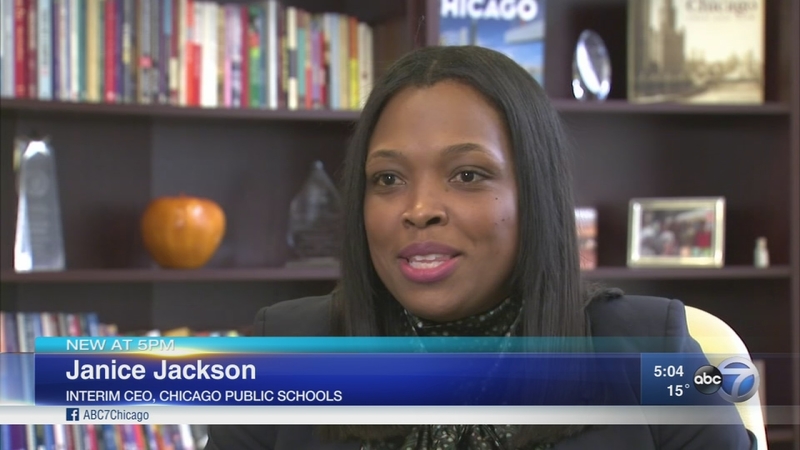 CHICAGO (WLS) -- Interim CPS CEO Janice Jackson -- a former Chicago Public Schools student, teacher and principal -- is expected to be permanently appointed to lead the school district at the next board meeting.

On Wednesday, she sat down to talk about her vision for the future of Chicago schools.

Raised on Chicago's South Side, the 40-year-old said that having a personal stake in CPS gives her a unique perspective when faced with tough decisions. She is the first CEO to have taught in the school district since 1995 when the mayor's office took control of CPS.

"When people don't trust that district, I take that personal, not just because I'm the CEO, but because I owe everything in my career to CPS," Jackson said.

Besides an investigation that led to Jackson's predecessor, Forrest Claypool's downfall, the inspector general's annual report said several CPS employees stole thousands of dollars worth of gift cards meant to be used as incentives for students and families.

"What is called out in the (inspector general) report is completely egregious and completely unacceptable," Jackson said.

She said she will consider policy changes based on the report. Building trust in the system will be a priority, Jackson said, as well as having schools with quality programs in every neighborhood.

"I think what you are going to see under my leadership is a vigorous approach to making sure opportunities and are more equitably distributed," Jackson said.

Neighborhood schools must remain a core focus for the district, she said. However, she does support school choice and will face strong opposition from residents and the Chicago Teachers Union for the planned closure of four South Side high schools.

As she is faced with tough decisions ahead, Jackson said having her own children go to CPS will make a difference. Claypool and Emanuel have sent their children to private schools.