Election results 2020: Why the presidential race hasn't been called in North Carolina 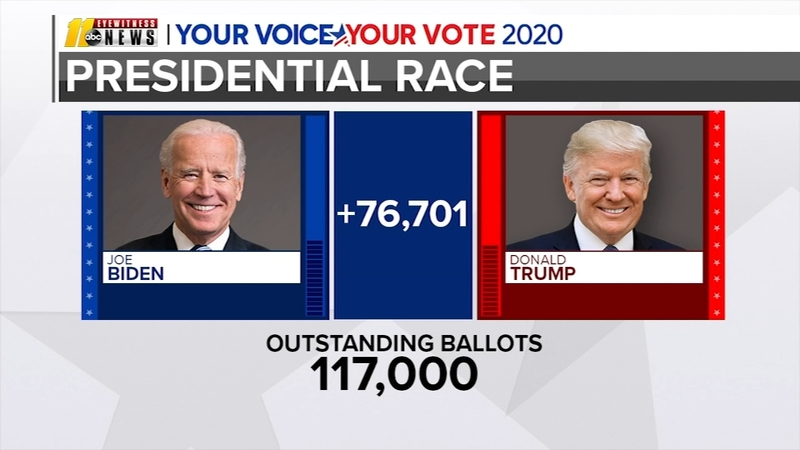 Why the presidential race hasn't been called in North Carolina

ABC News and other news organizations have not yet declared a winner in North Carolina's presidential election.

Many other states have been called -- so what's the hold up in the Tar Heel state?

Well, here, the race between President Donald Trump and Democratic nominee Joe Biden is extremely close and still too early to call. That's largely because of absentee and provisional ballots.

The ABC News Decision Desk, or D-Desk for short, is charged with making those critical projections knowing full well the entire nation is watching.

Trump is only leading Biden by about 76,000 votes in North Carolina and there are still about 116,000 mail-in ballots that were requested by voters but haven't yet been received by the board of elections or counted.

The unofficial results so far include more than 977,000 absentee by mail cast by Nov. 2, 3.6 million ballots cast by one-stop early voting and approximately 900,000 ballots cast at Election Day precincts.

"North Carolina stopped counting votes on election night because there were no more votes to count at that time," State Board of Elections Executive Director Karen Brinson Bell said during a news conference on Wednesday. "There are also no more ballots that can be cast for election. All eligible ballots have already left the voters hands."

The State Board will meet on November 24 to certify the election.

2020 Election Results: North Carolina yet to be called in Trump, Biden presidential race

Absentee ballots had to be postmarked on or before Election Day and they are counted as long as they are received by the county board of elections by 5 p.m. Nov. 12.

And any mail-in ballot that arrived after 5 p.m. on Monday did not count toward the Election Day total.

Who will win the 2020 election? Here are Joe Biden and Donald Trump's paths to victory

Provisional ballots also haven't yet been counted and it's unclear how many of those were submitted in early voting and on Election Day.

Brinson Bell said the total number of those ballots will be announced before noon on Thursday.

In 2016, she said, North Carolina had 61,000 provisional ballots. Less than half, approximately 27,000, ended up being counted. However, there was lower voter turnout on Election Day this year, so the number is likely to be lower.

A voter might receive a provisional ballot if a voter's record of registration cannot be found, a voter provides an address different from the voter's registered address, a voter was previously registered in the county but the registration was canceled, an election official is unable to locate a voter's address in the county's street lookup files, a voter's record indicates that the voter has already cast a ballot in the election or a voter requests to vote at a polling place on Election Day that is not the voter's proper precinct.

Those ballots aren't processed until they are inspected, reviewed and opened at an open meeting of the county board of elections.

State officials have until Nov. 12 to count all of the remaining ballots.

County boards of elections will hold their canvass meeting at 11 a.m. November 13.

For that reason, it is unlikely that a winner in North Carolina will be declared before then.

When Brinson Bell was asked by a reporter on Wednesday if there would be any movement in the state's numbers before that date, she said "very few exceptions" would make that happen.