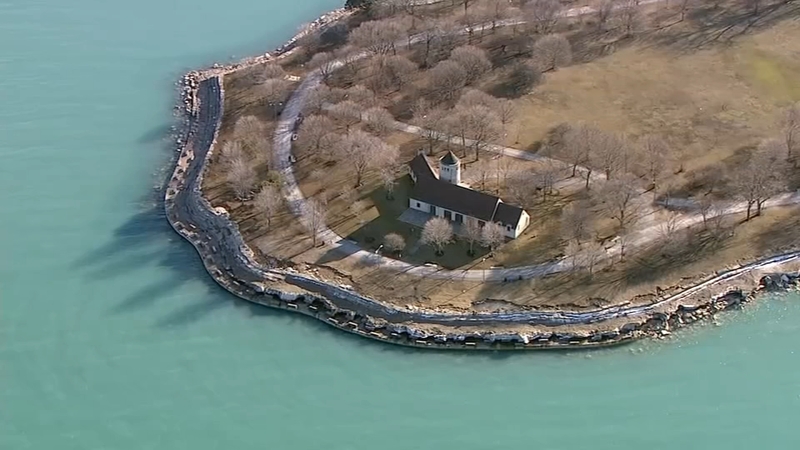 CHICAGO (WLS) -- Preservation Chicago has released its 2022 list of threatened historic buildings and landscapes across the city.

Since 2003, the non-profit has used the "Chicago 7 Most Endangered" to sound the alarm on threatened properties in order to mobilize the support necessary to save them from demolition.

Central Park Theater in North Lawndale is one of the historic buildings on the danger list.

"For some it's an eyesore," said Tashona White. "For us it's a history, historical, and you can't just destroy it. It is an endangered building."

White said The House of Prayer Church of God in Christ envisions turning it into a cornerstone of the community.

"We envision artists coming together, social impact, where we are helping with job training," she said.

North DuSable Lake Shore Drive also makes the list. There are discussions to tunnel the road underground, and maybe straighten it out.

"We don't have to demolish bridges, we don't have to straighten Lake Shore Drive," said Ward Miller, executive director at Preservation Chicago. "If you start touching LSD, it becomes a highway issue."

Ward Miller of Preservation Chicago also wants to save mid-century modern buildings on the Northwest Side.

"These buildings on Peterson make you chuckle, make you smile," Miller said.

The Century and Consumers Buildings on State Street could be demolished soon. Miller said there is a $52 million dollar bill before Congress that would pay for the demolition.

Moody Triangle, with three buildings, could be redeveloped. Preservation Chicago wants them saved, including the gas station's unique canopy.

And there are public housing buildings across the city, like those at Altgeld Gardens, that were once the heart of the community. Now they continue to deteriorate, just like the Cabrini rowhouses, sitting vacant for about 20 years.

Promontory Point is another concern. There are plans to cement the waterfront, but others want to keep the historic, limestone bricks.

"It's been there since the 30s, it's doing its job, there's no emergency," said Jack Spicer, Promontory Point Conservancy. "It's beautiful."

"If we are really a world class city, we honor these things, so we need to get busy," Miller said.

Others are ready, ready to save each one.

Here is the full "2022 Chicago 7 Most Endangered" list, along with descriptions of each site from Preservation Chicago: 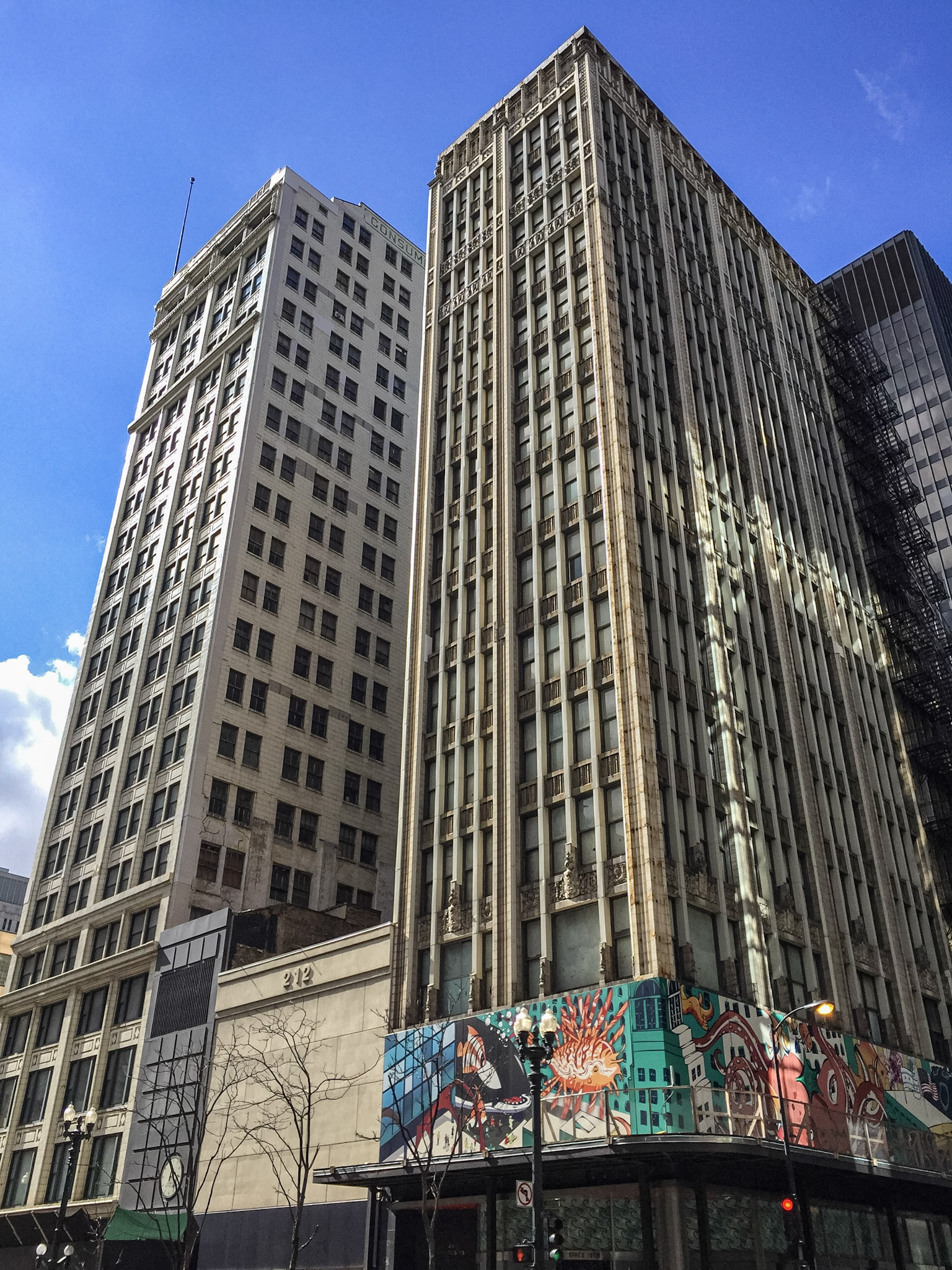 Preservation Chicago has long been concerned about the deferred maintenance, vacancy and deteriorating condition of The Century and Consumers Buildings at 202 S. State and 220 S. State respectively, in the heart of the Chicago Loop and the city's Central Business District. Preservation Chicago has recently learned that a $52 million expenditure has been earmarked in the Federal Infrastructure Bill currently before Congress, specifically for the demolition of The Century Building and the Consumers Buildings. The decades-long advocacy efforts to save these significant buildings is therefore reaching a critical stage. The 16-story Century Building was designed by Holabird & Roche (1915) and the 22-story Consumers Building was designed by Jenney, Mundie & Jensen (1913).

Preservation Chicago redoubled its efforts to identify an adaptive reuse that could accommodate the rigorous courthouse security requirements. We arrived at a highly unusual solution, a collaborative national archive center to be known as the Chicago Archives Center. Recognizing the growing urgency to repurpose these buildings, Preservation Chicago has been working diligently over the past two years to build a strong coalition of critical stakeholders to propose a viable adaptive reuse plan. In an era of ever-shrinking tax dollars, now is not the time to use $52 million of public taxpayer monies to destroy historic buildings for vacant lots. If properly repurposed for government use, or as a Chicago Archives Center, these two buildings could serve the people of Chicago for another 100 years or more.

At Altgeld Gardens, we are spotlighting the unique Midcentury Modern, one-story curvilinear Commercial Building, known locally as "Up-Top," and designed by the seminal architectural firm of Keck & Keck. The building is now almost completely vacant. The other non-residential building in Altgeld Gardens that we are highlighting is known as the "C-Building," which is part of the George Washington Carver Elementary and Primary School Complex. Despite various uses over its lifetime, the C-Building has been vacant for more than three decades.

The Cabrini Row Houses comprises 586 units on 16 acres. They consist of two- and three-story buildings. It is bounded by Chicago Avenue, Larrabee, Oak and Hudson Streets. Over the years this development has mostly languished and fallen into disrepair. About 140 units have been restored, but the vast majority of these row houses have languished, despite the overall growth and development of much of the former Cabrini-Green project area on the Near North Side.

While Lathrop Homes' North Campus of buildings and its historic Jens Jensen landscape has been beautifully renovated after a 20-year advocacy effort, the South Campus comprises almost half of the development area and is again stalled. Most of the historic 1938 buildings are vacant, with the exception of a senior housing building and a new apartment structure.

The CHA is once again neglecting some of its historic resources and developments, with more than 1,000 existing housing units being mothballed or vacant. It is time to put people and history first. Restore these historic complexes and put them back into good use for the people. 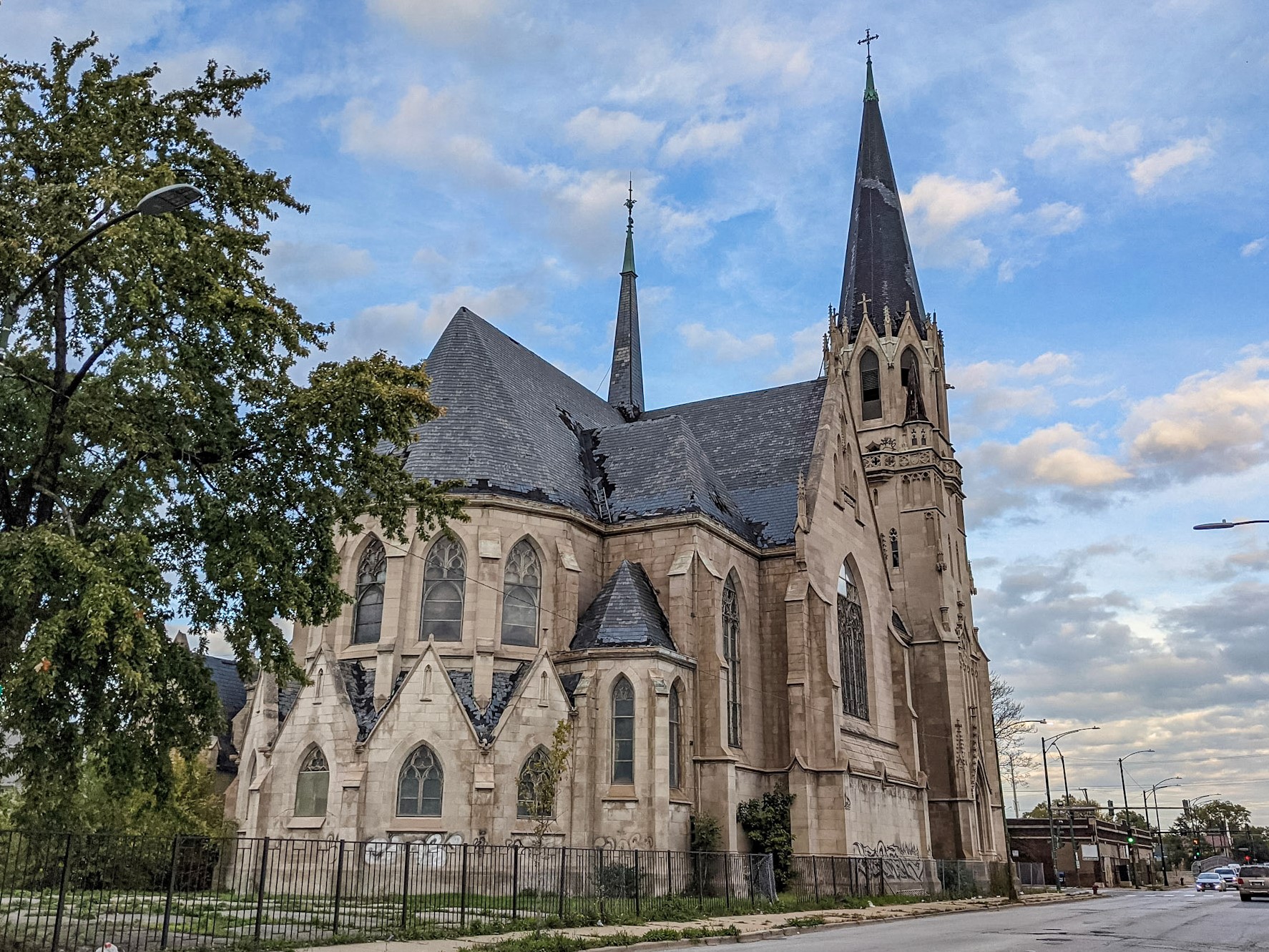 For nearly 130 years, St. Martin Church, a striking Gothic structure with a soaring steeple, has been a visual landmark on the South Side of Chicago. Located at 5848 S. Princeton, it was designed by renowned ecclesial architect Henry J. Schlacks for a fledgling German Catholic parish in Englewood. The church first served German immigrants and became a thriving Black parish before closing in 1989. After years of deferred maintenance and closure, St. Martin has suffered significant deterioration. Without intervention, this church will continue to deteriorate due to weather, deferred maintenance, and its unheated interior.

Restoration of St. Martin's Church could see a reuse as a creative incubator space. This luminous space can provide a spiritual and emotional benefit even if it is not used for religious services. It could be used for smaller-scale arts education, exhibits, and performance. It could also house a small gallery featuring goods produced by local craftspeople and artists. The parking lot on the site of the demolished St. Martin school building could be turned into green space with beekeeping and a native-plant garden, as well as community plots for growing fresh produce. A renovated St. Martin Church can be a beacon of pride and hope for the entire community, making this corner of Englewood a treasure that is no longer hidden.

This area, which covers a roughly two-mile stretch from North Park to West Ridge, is the finest collection of Midcentury Modern architecture anywhere in the City of Chicago. Today, Peterson Avenue's Midcentury Modernist buildings are threatened by neglect, abandonment, unsympathetic alterations, and demolition. Many of the street's most significant designs have been razed, most recently the Sapphire Building at 2800 W. Peterson Avenue.

Preservation Chicago endorses a Peterson Avenue Midcentury Modern Landmark District, including the exterior of many buildings and some intact interiors along Peterson, California Avenue and Lincoln Avenue. Finally, the Chicago Historic Resources Survey should be updated to include these significant structures. Chicago has an extraordinary opportunity to elevate its Midcentury Modern legacy along this commercial corridor, to permanently establish that these significant sites, especially Peterson Avenue's valuable trove of Midcentury Modernism, are important, that they matter, and that they are forever worthy of preservation. 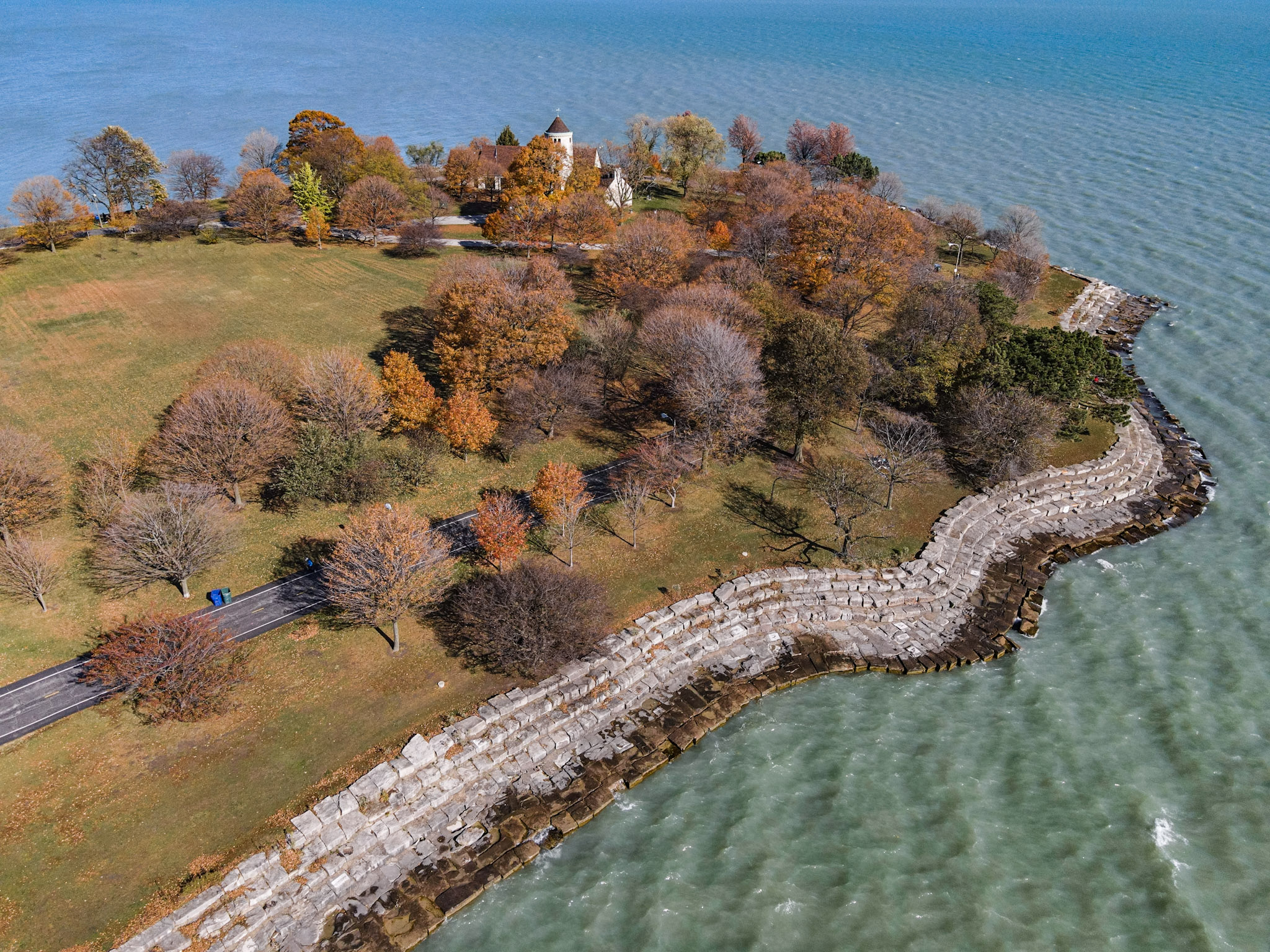 The historic limestone revetments at Promontory Point are under immediate threat from plans to replace them with concrete. The City of Chicago and the Chicago Park District intend to replace The Point's natural limestone with a mass of concrete, destroying not only the historic stepstone revetment, but also the naturalistic aesthetic of this Alfred Caldwell-designed park.

This irreversible alteration will adversely affect the open and diverse community culture that has thrived for decades at Promontory Point, on the lakefront between 54th and 56th Streets, moving this historic site further away from its original design and setting a precedent for future unsympathetic alterations.

Despite efforts since the 1980s to replace the eight miles of limestone revetment along the Chicago lakefront, that work did not proceed at Promontory Point. Well-organized community members worked diligently to keep the limestone in place. A preservation approach to repair and rehabilitate the limestone revetment is still viable, and the City and Chicago Park District need to change course to focus on restoration and not demolition. 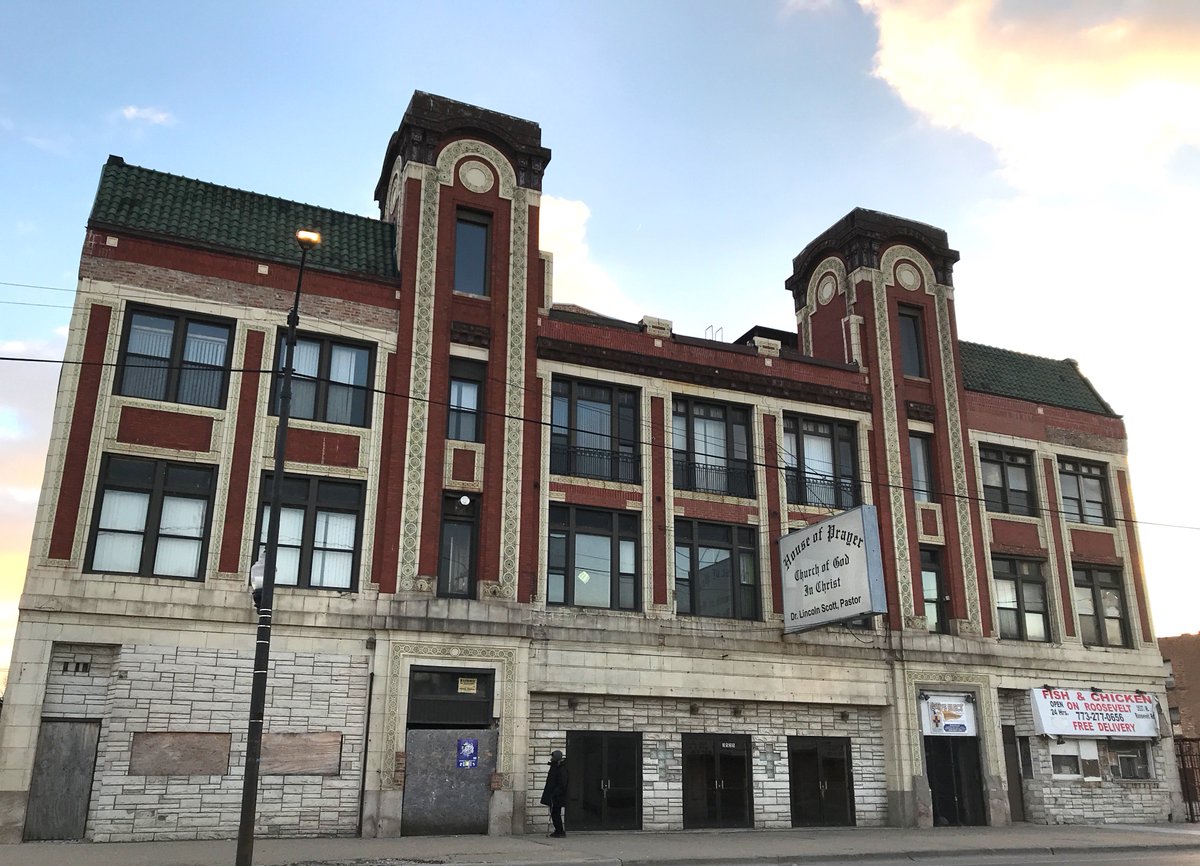 The Central Park Theater in North Lawndale is the mothership of a remarkable partnership between theater developers Balaban & Katz and architects Rapp & Rapp. While they would go on to build grander and more remarkable theaters as they evolved, it all started at the Central Park Theater. The theater at 3535 W. Roosevelt Road closed in 1971 and the House of Prayer Church of God in Christ congregation and leadership has been stewarding it since. Without their intervention, this theater would likely have joined the demolition debris that continued to sweep through North Lawndale in the 1970s and 1980s.

The repair needs at the theater are growing, and the older congregation at House of Prayer is dwindling. The church retained this historic theater for 50 years, and now they need help getting it across the restoration finish line. With collaboration between City agencies, the excellent team of partners on the Central Park Theater Restoration Committee, and alignment with investors and developers, this restoration is more than possible. The community vision is for a cultural center with concerts and programs in the auditorium, cultural tenants in the front second and third floor spaces, and retail uses on the first floor that would support residents and visitors in the area and patrons of the Central Park Theater itself. Pastor Robert Marshall and his family continue to carry on the work at the Central Park Theater to keep it standing and thriving. With a little bit of flexibility and creativity, the City of Chicago can help in these efforts to bring the Central Park Theater back to life. 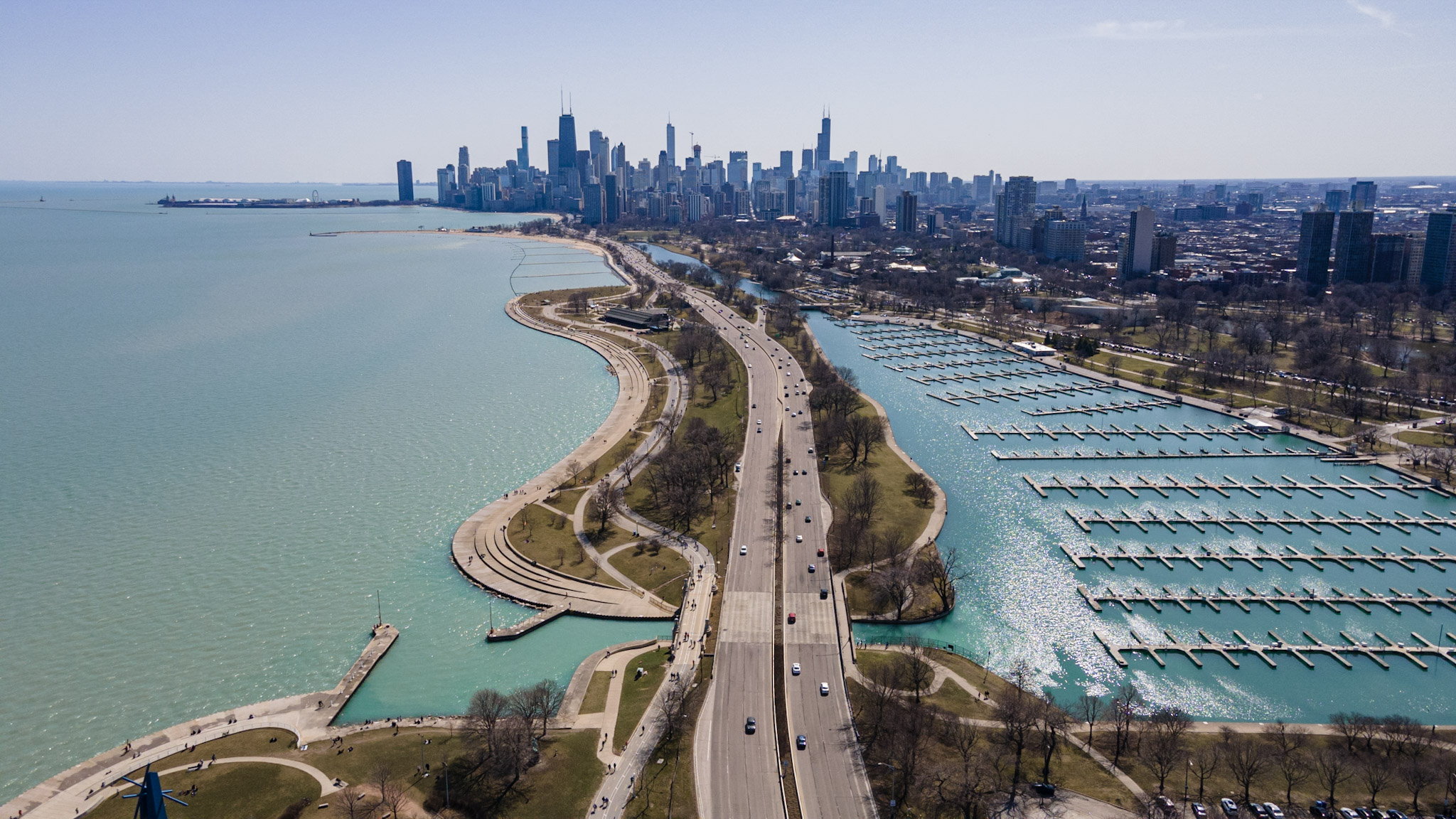 For the first decades of its existence, North DuSable Lake Shore Drive was a slow-paced, boulevard parkway that allowed Chicagoans to enjoy the ride along the Chicago lakefront by horses or bikes and later by automobiles. It has steadily evolved into trending toward a highway instead of a boulevard parkway. Current visioning looks to impose interstate highway standards on North DuSable Lake Shore Drive which would fundamentally change the character of this important and historic parkway.

The issues along North DuSable Lake Shore Drive are many. However, let's take a more sensitive and holistic approach to preserving and - where required or needed - rebuilding bridges and underpasses. Let us continue to maintain and honor those remarkable features that make traveling along North DuSable Lake Shore Drive a pleasurable experience. After all this is one very special boulevard drive and we should not squander its beauty and natural qualities or its historic resources.

The Moody Triangle site is formed by North Avenue at the south and the convergence of Clark Street and LaSalle Drive at the north end of this block, within the Old Town neighborhood of the Lincoln Park community. This highly visible parcel fronting Lincoln Park and the Chicago History Museum has recently come to our attention as a potential revisioning and redevelopment site by Moody Church and Fern Hill Company. This site contains three buildings which are extremely noteworthy and threatened by the looming redevelopment on the surrounding Moody Bible Campus: