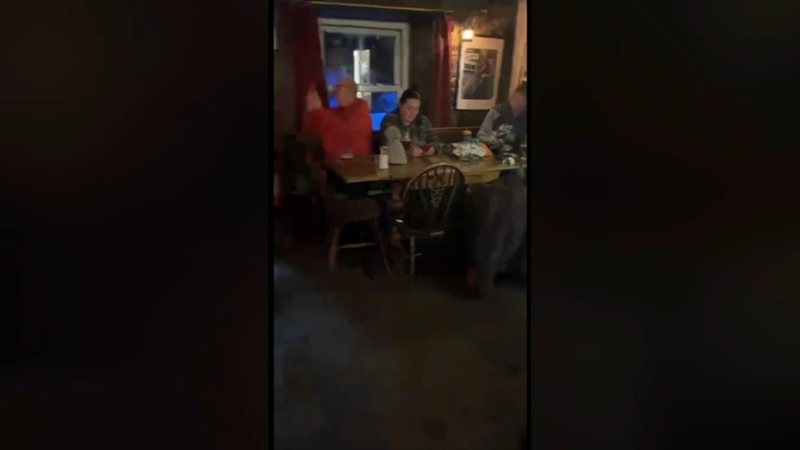 Pub patrons snowed in for 3 nights in Northern England

Dozens of people have been snowed in at the highest pub in the United Kingdom for three nights after the country was hit by Storm Arwen.

More than 60 revelers who went out to the Tan Hill Inn in Swaledale, northern England, on Friday ended up extending their stay after snow blocked roads and brought down a power line, co-owner Andrew Hields told CNN on Monday.

"They're all in good spirits, they're all eating and drinking well," said Hields, 36, who said guests have been entertained by an Oasis cover band, Noasis, who were booked to play on Friday night, as well as quizzes, table games, karaoke and sing-along carol sessions.

There are three routes to the isolated pub, which sits at an altitude of 1,732 feet above sea level. Two of them were blocked by snow drifts, and a downed power line shut the third, said Hields, who has been prevented from getting to the pub.

This is not the first time snow has stranded guests at the pub, said Hields, who added that as soon as there is a weather warning staff stock up on fuel, food and drink.

That means the power cable coming down hasn't affected the running of the pub, according to Hields.

A mountain rescue team was called in to evacuate one man who is undergoing dialysis treatment, said Hields, but the rest stayed for a unique experience.

One guest, Vicky Hodgson, told CNN she had driven to the pub to watch Noasis on Friday night in her motorhome, and eventually was able to leave on Monday morning.

"It's been a bit of a whirlwind weekend," said Hodgson, who praised staff at the pub for looking after everyone.

Some of the guests were meant to be camping outside, but staff made up beds inside the pub for them after their tents were destroyed by the storm, said Hodgson.

"Tan Hill have been absolutely brilliant," she said. "It's actually been really enjoyable."

Another guest, Becky Longthorp, commented on the experience on a Facebook post from the Tan Hill Inn on Sunday, after being stranded for three days.

"You guys have been amazing! You've worked never ending shifts to keep us well fed and watered," wrote Longthorp. "We will never forget this extr[a]odinary experience."

Weather warnings were in place across large parts of the UK last week due to Storm Arwen, which brought severe weather and winds speeds of over 90 mph (144 km/h) in some areas.

Rare red weather warnings were issued on Friday after the Met Office described conditions as "horrendous."