Unlicensed doctor compares himself to Dr. Dre in DEA interrogation 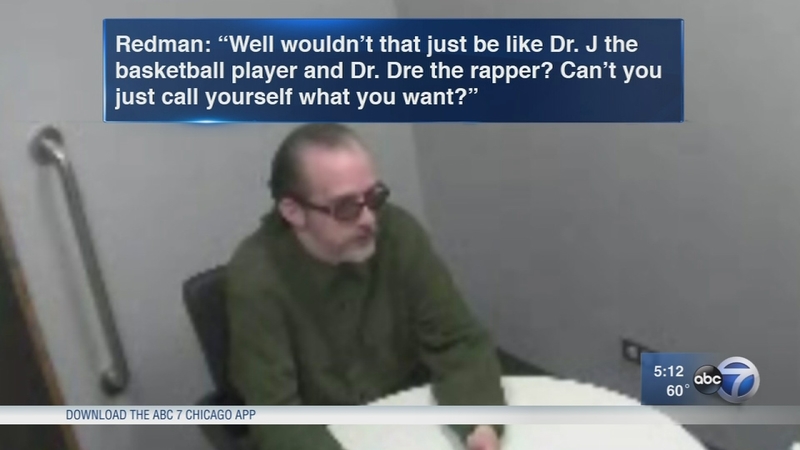 CHICAGO (WLS) -- The ABC7 I-Team obtained exclusive video of an unlicensed psychiatrist who was recently convicted in federal court.

Scott Redman pleaded guilty to posing as a psychologist in Cook County last year, but continued to work.

Late last week, a jury found Redman guilty of posing as a fake psychiatrist. Now, the I-Team has exclusive video of Redman's interrogation by the DEA.
DEA: The people you typically prescribe controlled substances to, what are you treating them for?
REDMAN: Could be anything from a panic disorder to schizophrenia or manic bipolar.

Redman answered questions from investigators with the Drug Enforcement Administration. Redmond illegally wrote 71 prescriptions for dozens of individuals, including a 9-year-old girl, according to federal prosecutors. He did it by stealing the identity of a legitimate Illinois physician.

REDMAN: Well, wouldn't that just be like Dr. J the basketball player and Dr. Dre the rapper? Can't you just call yourself what you want?

On Thursday, Redman was found guilty of aggravated identity theft, furnishing false information to the DEA, distributing a controlled substance and wire fraud.

"It was incredibly unconventional but I had to do something," Redman said on the interrogation tape.
Kathy Baran was just one of Redman's former patients who spoke to the I-Team last spring after she said she found that Redman was unlicensed.

"I feel violated and I don't use that word lightly but he definitely did that," Baran said.

The I-Team started uncovering stories from angry patients in February, exposing Redman's extensive record of lies and accusations that he also posed as a psychologist.

In April, the Cook County state's attorney charged him with two felonies of rendering services without a license. In October 2015, he pleaded guilty to a misdemeanor charge of rendering psychological services.

Redman is scheduled to appear February 8 for sentencing in his federal case. A conviction carries a maximum sentence of 166 years in prison.

Gaylean Woods was a patient of Redman's and has a criminal case pending against him that is being prosecuted by the Cook County State's Attorney. In a statement, Wood said, "He's been called a con man, but he really didn't con anyone. In my opinion, what he is and was is a very clever psychopathic criminal, who needs help himself. I am glad that I was instrumental in bringing his psychotic activity to light, but sad that the system who first tried to stop him failed. He received a slap on the wrist and an order to stop, only to just pick up and move to the next community with the next set of victims in mind. There was no genuine compulsion to help people, just to be something he wasn't, and possibly to get money. It's lucky that some of the people he gave medication to didn't have any serious long lasting side effects.

However, for some of his victims, there will be the lasting guilt, and questioning of their ability to judge people. It takes a lot to reach out when you need help, and then to find that you've reached out and connected with someone like S.C. Redman makes it hard to continue seeking. I nor my husband are victims in this and we hope that those who were harmed in any way by this man will not see themselves as victim's either, but continue to find the strength to reach out to someone who is real and can help.

There are still more court dates to face. My case is still pending in Bridgeview, and I hope that he is found guilty on that as well. We are not expecting restitution, but spending time behind bars will be a good thing for him. He may even get some help for himself and reflect on who and why he exists.

Sometimes the justice system gets it right and sometimes they get it wrong, but in this case they got it right."