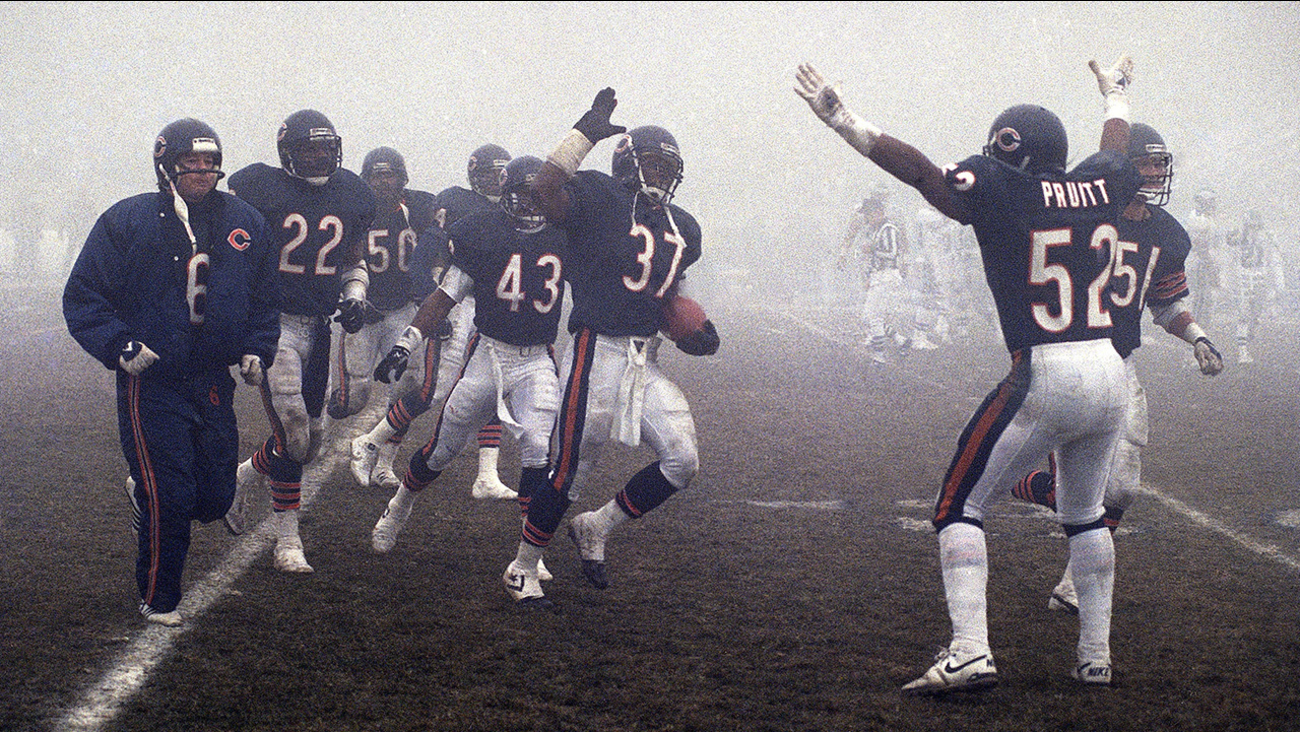 Chicago Bears free safety Maurice Douglass (37) runs out of the fog and is congratulated by teammates during the "Fog Bowl" on Dec. 31, 1988 in Chicago. ((AP Photo/Mark Elias))

CHICAGO (WLS) -- On New Year's Eve 30 years ago, overcast skies hung over Chicago as the Bears and Philadelphia Eagles played in the iconic 'Fog Bowl' at Soldier Field.

The Bears jumped out to a 17-6 first-half lead while Ryan (who had previously been the Bears' defensive guru) and his Eagles made mistakes.

"It's gotta be a game of epic proportions. I didn't know God was going to intervene too," remembered former Bears defensive lineman Steve McMichael, who played that day.

His memory was far from foggy as he described playing in the thick, cloudy curtain that suddenly landed right on the field.

"You trying to look out your window and you've got zero visibility in front of you, that's kind of like what it was," McMichael recalled.

"Got scary for a minute," said Bears Cornerback Mike Richardson in a post-game interview that day, adding, "I thought I was in a cemetery."

"Welcome to Chicago where weather can change at any minute and it certainly did today," Ditka after the 1988 game.

Everyone from the press box down had the same question were stumped about the weather phenomenon.

"What the fog is going on," read one fan's sign.

McMichael, who also starred on the 1985 Super Bowl champion Bears team, blamed Ryan for claiming the Eagles' defense would outshine the Monsters of the Midway.

"I think that fog was mostly about the smoke that was coming out of our ears after he said that coming out of that locker room baby," McMichael said.

Whatever caused the fog, it contributed to a great game that fans never saw from the stands (some turned to TVs inside the stadium or turned on their radios). Camera crews didn't have much better luck capturing the action from field-level.

Despite all the obstacles, the game went on -- with interceptions and all.

Eventually, Bears QB Mike Tomczak would be knocked out of the game;replaced by an injured Jim McMahon who disappeared into the unknown as he trotted onto the field.

The Bears held out to win the iconic Fog Bowl 20-12, sealing it with a field goal.

Some Eagles blamed the weather for the loss while others complained about lousy refs. But McMichael doesn't buy the excuses since the game got closer when no one was watching.

"I guess we were better at playing blind man's bluff than them," he suggested.