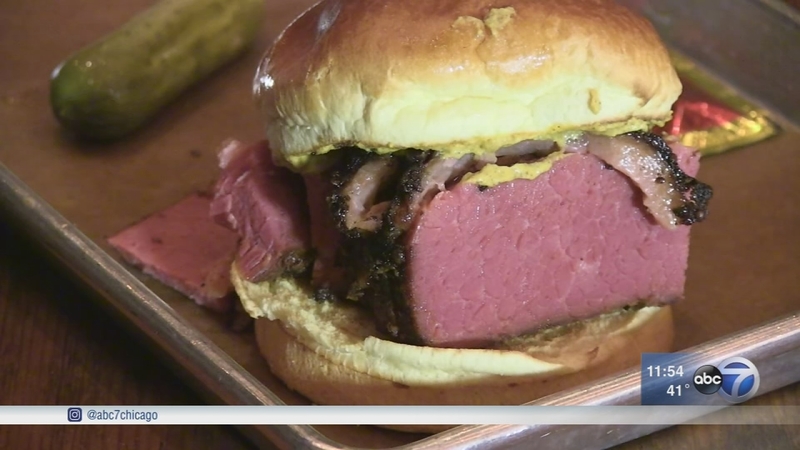 CHICAGO (WLS) -- Our Hungry Hound said the thought of turkey sandwiches for the next few days doesn't seem all that appealing, which is why he's thankful for the city's pastrami options. He said there are several places now brining, curing and smoking their own briskets, much like they do in New York or Montreal.

The pastrami sandwiches at Steingold's of Chicago, a Jewish-style deli in North Center, require plenty of logistics. A day before the American wagyu briskets arrive, they begin at the Barbecue Supply Co., a restaurant and event space in West Rogers Park, where they're rubbed using Steingold's secret recipe, then smoked a good 14 hours. Back at the deli, they're sliced throughout the day.

Earlier in the day, bakers at Publican Quality Bread in the West Loop create the sturdy, malty rye bread the deli uses. It takes several hours of weighing, shaping and resting before it's baked.

The loaves are unlike any rye you've tasted.

Back at the deli, bread is sliced and the pastrami is griddled for about 30 seconds.

It's piled high over a shmear of grainy mustard. But Steingold's is just the latest in a distinguished line of pastramis now available in Chicago.

For years, Hopleaf - an Andersonville mainstay with the region's best lineup of Belgian beers - has been making pastrami, dry-rubbing it up to a week then serving it on light rye with mustard.

Leaning a bit more toward the Montreal-style of brined and smoked brisket, Humboldt Park's Cafe Marie-Jeanne does an outstanding version.

"We brine it in coriander and black pepper and pastrami-style spices. We're not necessarily trying to make exactly Montreal-style smoked meat because I don't know that we could achieve that, but we like the, we like to evoke that feeling," said owner Mike Simmons.

Smoked for about 24 hours, it emerges with a dark "bark" and a pink interior; totally juicy and primed for stacking on homemade country wheat bread slathered with German mustard.

At Green Street Smoked Meats in the West Loop, briskets are wet-brined, then get dry-rubbed in black pepper, coriander and dried chili for a couple of hours before hitting the wood-fired smokers for nearly half a day, emerging tender and juicy. Hand-sliced and placed onto mustard-kissed burger buns, they are as hard to put down as the ones at Fumare Meats, just a few blocks away inside the Chicago French Market. The brisket is dry-rubbed and cured for two weeks, then soaked in water to remove excess salt. It's only smoked for about 90 minutes, but slow-roasted for about 12 hours. Sliced thick and layered onto rye bread with yellow mustard, it's a combo that's hard to beat.

So I know everybody makes a big deal about turkey sandwiches for the next few days from leftovers. Forget it. I say check out some of the great pastrami or Montreal smoked meat you have available in Chicago.

In Steve's Extra Course, he takes a closer look at some of the new vendors that have opened in the Chicago French Market recently.
EMBED More News Videos

In Steve's Extra Course, he takes a closer look at some of the new vendors that have opened in the Chicago French Market recently.