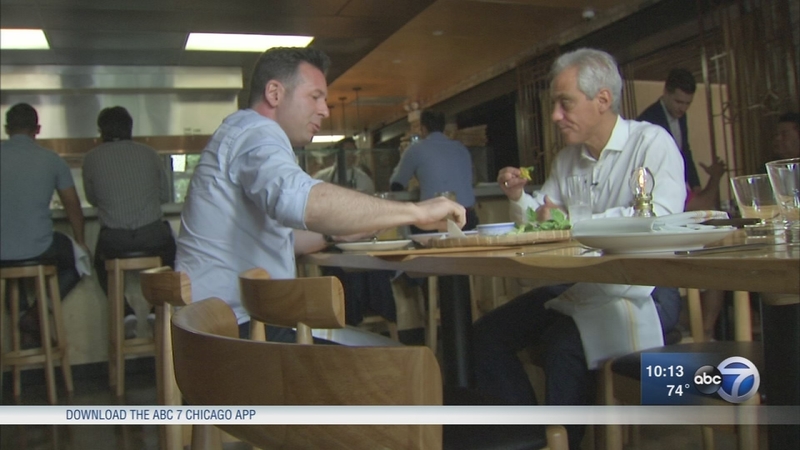 CHICAGO (WLS) -- Mayor Rahm Emanuel is typically seen at press conferences or podiums, talking about any number of the city's most pressing issues.

But as the ABC7 food reporter, I had a rare opportunity to sit down and break bread with the mayor, who was all-in for a chance to check out some local restaurants.

The conversation ranged from establishing Chicago as a culinary hub, beyond deep dish and Italian beef, to trying to gain a better understanding of where his love of food comes from.

We meet at Haisous, a brand new Vietnamese restaurant in Pilsen.

"Should I just take the liberty of ordering a couple of things?" I ask.

We then start off with a thinly-shredded papaya salad, dressed with fresh herbs, fish sauce and fried shallots.

"I see you at restaurants all of the time in the city, you love Asian food like I do, where did this love come from?" I ask

Yes, and so that was, I think directly related to traveling made me start to appreciate different types of food, different preparations and I love spicy food, I love peppers, I could eat 'em all day long."

As Promoter-in-Chief, he realizes there's a lot more here than just the usual suspects.

"Does part of you, as a Chicagoan, feel like well I don't want them just to see Italian beef and deep dish pizza, I want them to see the wealth of what we have now in the city?" I asked.

"This is a food-loving town. Actually, pizza and Italian beef and hot dogs, etc are known, the fact is we have a really built-in foodie culture. And that has allowed chefs to become entrepreneurs to start off and they're now minting other chefs and so Chicago in the last five to ten years has really started to get into its own. Not only that but internationally known," he said.

Chef and Owner Thai Dang talked about one of my favorite dishes -- banh xeo, a crispy shrimp-and-pork crepe served with fresh herbs and lettuces.

"Here is green mango that you're gonna put into your lettuce and dip into the fish sauce," Dang said.

"I just want the rabbi to know, it looks like shrimp, but it definitely is not. Dolinsky..." jokes Emanuel.

"So tell me about the Beard Awards," I ask. "They're going to be here another couple of years?"

"I said one year. If I don't succeed, the city doesn't succeed, you're done, with the option to extend. So one year became three, three became seven," Emanuel said.

"Is that a feather in the cap for the city to have that award?" I asked.

"I don't think we would have gotten the write-up in Conde Nast for being the best restaurant city in America; it said L.A. move over it's now Chicago," he said.

Emanuel says he's constantly dragging his wife to new places, all of which, it seems, have one thing in common.

"That's my biggest pet peeve right now, every place is too loud. Don't you think?" I ask him.

"I think you're getting old. I wanna help you out Steve," Emanuel replies.

We leave HaiSous - not before Emanuel has peppered Chef Dang with questions about his new kitchen equipment - and walk down 18th Street, where it's a lot of handshakes and waves.

We stop at Don Pedro Carnitas, the home of deep-fried pork, as in, the whole animal.

And the only kosher carnitas place in Chicago, I joke to Emanuel.

But Emanuel dives into the rib meat and skin, white onions and fresh cilantro.

We crush fried chicharrones, that crackling pork skin, over our salsa-laden tacos.

"This is not what you'd call knife and fork food; this is a little bit messier," I say.

A record 54 million tourists visited the city last year. Emanuel attributes that to our food scene.

"The city had a pretty big year last year for tourism, are you finding culinary tourism is a thing?" I ask.

"People used to travel for theater or baseball game, they are traveling now for restaurants," Emanuel said.

"Pilsen is not really River North or the Gold Coast not the Theater District, but I think this place says so much about our city," I remind him.

In this week's Extra Course, Steve goes back to HaiSous to talk about some of the best chicken wings he has ever had.

Steve talks about some of the best chicken wings he has ever had at a restaurant.