WLS
By Steve Dolinsky
CHICAGO (WLS) -- Every country seems to have a national dish. In the Philippines, most would agree that dish is Adobo.

With inspiration from both Chinese and European traders, the dish has been available around Chicago for years and is showing up again at a pair of new restaurants.

However, like any country with a diverse population, there are more than 7,000 islands in the archipelago with differences between nearly every adobo.

A lot of it depends on how someone's mom learned to cook it and you can see the influences right away. Some use more sugar for caramelization, others rely on longer stewing for a more gravy-like sauce. The only thing they really have in common is garlic rice. Beyond that, adobo in Chicago is subject to a lot of interpretation.

Foot traffic at the Chicago French Market is a lot lighter these days, and A Taste of the Philippines is a kiosk there that could easily be missed if you blink. Owner Kathy Vega Hardy makes everything from scratch, like her hand-rolled lumpia, and when her adobo is front-and-center on the menu.

"Adobo is a very classic dish, it's probably one of the most well-known dishes in the Philippines," Hardy said. "It's chicken or pork, and it's simmered in soy sauce, vinegar, lots and lots of garlic, bay leaves and peppercorns."

Served over garlic rice, the chicken legs get a light shower of fried garlic and some fresh scallions.

"The acidity with the salt and you include that with the rice...it's so good," she said.

In Steve's extra course he showcases some of Genie Kwon's desserts and pastries, including a showstopping halo halo for dessert.

Like nearly everyone's adobo recipe, it's inspired by the one her mother gave her.

"It's kind of gravy-like, so that's how I was influenced to make my recipe kind of like hers but kind of different," she said.

In Ukrainian Village, Kasama opened during the pandemic as well. They started with mostly take-out but has since expanded with a patio for outdoor dining in the back.

The owners came from fine-dining in Oriole's kitchen, so no surprise they're making everything from scratch, including their traditional Filipino breakfast of homemade longaniza sausage and tocino, a cured, barbecued pork. Each is served with garlic rice, paired with tart pickled green papaya and a fried egg. But their adobo - made exclusively with chicken wings that are first marinated then seared over a blazing hot binchotan charcoal grill - is a revelation.

"Originally it consisted of whatever protein, then garlic and vinegar. Then with Chinese traders, that's when the introduction of soy sauce came in, so there's basically three ingredients to every adobo - it's soy sauce, vinegar and garlic," said Tim Flores, the Co-owner of Kasama.

Flores also adds some fried garlic, echoing the garlic rice next to it.

"We add a little bit of sugar in ours, and then make a sort of adobo seasoning to help with that acidic flavor to bring that out," he said.

He says mom's recipes played a large role in the development of his menu, even though his training and previous experience are more high-end.

"Everything that we're cooking here is pretty much inspired by the food I grew up eating."

Our Hungry Hound Steve Dolinsky says the menu at Kasama is so good and really focused. He also says you have to try one of Genie Kwon's desserts or pastries. Make sure you check out his web-only Extra Course that showcases some of those items, including a showstopping halo halo for dessert.

A Taste of the Philippines
At Chicago French Market
131 N. Clinton St.
https://www.atasteofthephilippines.com 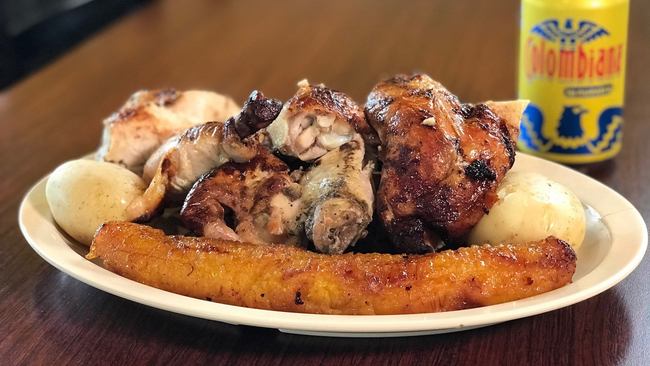