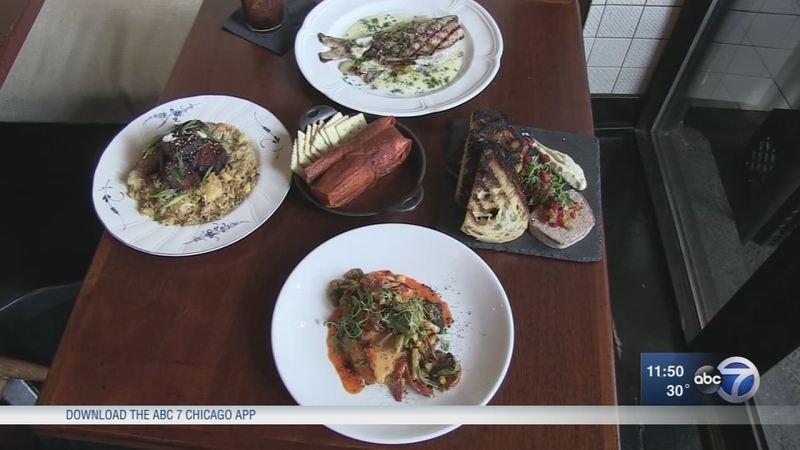 CHICAGO (WLS) -- There are, of course, restaurants in the Chicago area that specialize in southern food, but most of them tend to stick to the same script: fried catfish or chicken, biscuits and a plate of shrimp and grits.

But our Hungry Hound says there's a new restaurant in Wicker Park, where they're focusing in on the food from the Mississippi Delta - a region few kitchens tend to know much about.

The chef at the delta spent time on the ground in Mississippi, eating and researching before planning his menu.

The result is a very distinctive taste of the south, with a unique perspective, minus the usual cliches.

You'd expect to find pimento cheese and fried green tomatoes in a Southern restaurant; even the succotash - with its charred corn, piquillo peppers, pattypan squash and wax beans - it screams Southern home-cooking. But the food and drink at The Delta, in Wicker Park, has a very particular point-of-view, as all of the recipes and inspiration stem from the Mississippi Delta region.

"The say starts in the lobby of the Peabody Hotel in Memphis and goes all the way down to Vicksburg or Catfish Row as it's called down there," said Adam Wendt, the Chef at The Delta.

Tamales in Chicago usually rely on hominy, since they're influenced by Mexican cooks. But here, they're made with cornmeal.

"So there's no hominy flour in it, we're just using straight stoneground grits and they are actually simmered instead of steamed," he said.

These are no Tom Toms, Southsiders. Here, they're using ground brisket, onions, chili powder and tomatoes, simmering them in tomato broth; there's also a vegan and a gluten-free version too. A fried rice is cooked with bacon fat and eggs, topped with rich wedges of seared pork belly. Wendt says he ran into a 3rd generation catfish farmer in a bar while doing his research, which led to a delicious connection.

"It's light, fluffy, succulent, it's not muddy; we just baste it in a little bit of butter and lemon and throw it on the grill," said Wendt.

Cocktails are also southern-inspired. A Lewis Bag is used to whack and crush ice, using it in all sorts of refreshing drinks, spiked with rum, bourbon or gin.

Cooking Southern food is not new in Chicago, of course, but Wendt says it was important to try to replicate the flavor combinations from the Delta, for a Chicago clientele.

"That was honestly the biggest challenge, was reverse-engineering things that they do down there and making them as authentic as possible," said Wendt.

In Steve's Extra Course, he talks about The Delta's delicious fruit cobbler (a la mode, of course).

In Steve's extra course, he talks about The Delta's delicious fruit cobbler (a la mode, of course).