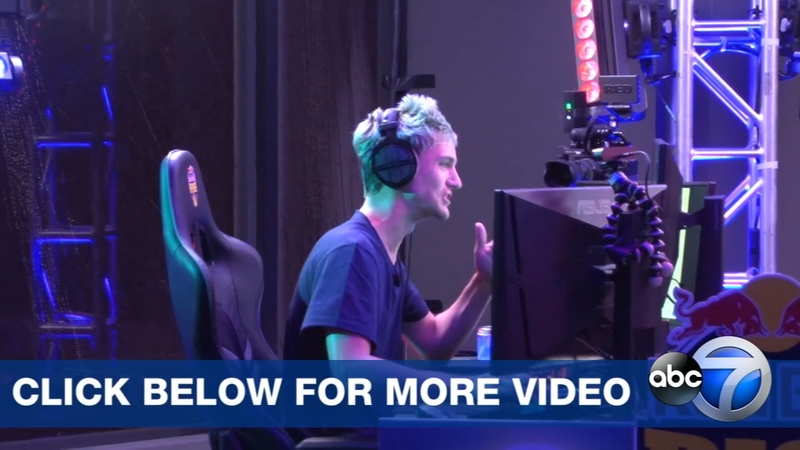 With jaw-dropping talent and an emphatic personality Fortnite streamer Tyler "Ninja" Blevins has become one of the biggest video gamers out there. The Chicagoland native has millions of social media followers and sometimes hundreds of thousands watching him play at one time.

"You watch a streamer, someone who makes you feel good," he offered as an explanation for what people find compelling about watching, adding, "Positivity is one of my main focuses."

That message appears to echo worldwide. In April, Blevins had more social media interactions than any other athlete. That ranking comes from Hookit, a firm tracking global sports sponsorship opportunities. By Hookit's count, Blevins bested stars like Cristiano Ronaldo and Shaquille O'Neal.

"I don't really know how to put it in to words. It was incredible. I wasn't expecting a statistic like that," said Blevins of that announcement.

Though he's since dropped a few spots (Blevins is currently ranked 3 on the latest list from June) and posts much more than others to stay near the top, Blevins is still the most influential Esports athlete by Hookit's count. I asked Blevins about his platform and the responsibility it brings fresh off his appearance at the ESPY's.

"Sometimes I'll say a little topic, a little opinion off the top of my head and it gets twisted and thrown on the internet," he noted.

"When I see little five-year-olds and kids come up and they're screaming 'Ninja,' and they're parents say 'oh you know our kids love watching you,' that that was one thing where it's just like, 'look the swearing and everything has to completely come to an end...' I have a younger audience and I need to be mindful of what I say," he said.

He's also used his streams to raise money for organizations like the American Foundation for Suicide Prevention.

Most days, he plays the wildly popular Fortnite Battle Royale shooter game for as many as 12 hours (you read that right) from his Lake County home. But I caught up with Blevins on the 99th floor of the Willis Tower as he prepared for the Red Bull Rise Till Dawn tournament running overnight this past weekend.

Fellow gamers, who are also fans, traveled from all over the country to take on the gaming icon and his partner "Dr. Lupo."

Two heats of 98 gamers took turns playing the celebrity duo. Whichever pair had the most points by sunrise won.

Freddy Castillo made the trip from El Paso, Texas, to play in the tournament.

"The energy they put into it... it's just so much fun to watch them with all of the screaming, the yelling," he said while waiting in line to meet Ninja and Dr. Lupo.

These antics reportedly earn Blevins more than $500,000 a month-not including sponsorships.

As Fortnite continues to mesmerize the masses, Blevins sees no signs of the game losing steam.

"New weapons like every two weeks and new items. There's always something to look forward to," he said.

"Gives each individual player their unique play style," added Marshal Deacon who drove 14 hours with his girlfriend from Lafayette, Louisiana, to play.

It's Ninja's way-how he knocks out opponents and the style of his cotton candy blue hair- that stands out more than others.

"My wife and I, we're using this exposure and this audience we have and continuing to go beyond Fornite," he said when asked about the future.