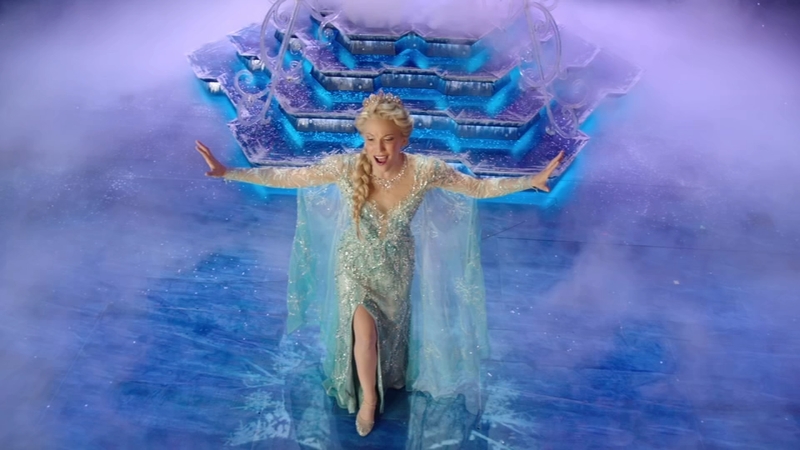 'Frozen' musical's wardrobe as magical as its story

CHICAGO (WLS) -- The musical "Frozen" is playing to packed houses in Chicago but not all the magic takes place on stage.

Elsa's ice dress is a showstopper.

"The dress sparkles, it looks like ice, sparkly ice," said Caroline Bowman, who plays her. "And I put it on and I put on the wig and I'm transformed into Elsa."

"Someone spent the time sewing every single one of these details onto this dress," said wardrobe supervisor John Furrow. "And each woman who plays Elsa has her own dress."

The "Frozen" wardrobe is crucial to the show's success, but Furrow said it also comes with a major challenge.

"The clothes are not light. They are built to be authentic, so the women townsmen are dressing are fairly heavy because they're made of fabrics indigenous to Norway and Sweden. Also, you notice there are a lot of heavy wool coats because most of it happens in winter," he explained. "It has its complications because of the weight of the clothes and the volume. We're constantly changing clothes. Everyone is constantly changing from head to toe."

Of course, the key to making this work is to do it very quickly, and with this show they've got it down to a science.

"Our fastest one is 52 seconds, and it involves all the men of the ensemble, all nine of them," said Furrow. "Fifty-two seconds from head to toe, that's a wig change, they had hats, coats, gloves and scarves and boots and pants."

Bowman and her real-life husband Austin Colby, who plays Hans, are part of the backstage costume mania.

But it's all part of the "Frozen" enchantment.

"When I see changes go properly, when I see people make their entrances, when I look out on stage and see things the way they're supposed to look, that's where I feel pride," Furrow said. "With this show, there's so much magic in it and it's very exciting to be a part of that magic, and to watch that come off effectively and hear the audience reaction is amazing."

There's a team of 16 people backstage making sure all the actors are in costume and on stage at the right time.