Looking for a gas giveaway Chicago location? Full list of participating stations below
WLS
By Liz Nagy and Maher Kawash and Stephanie Wade 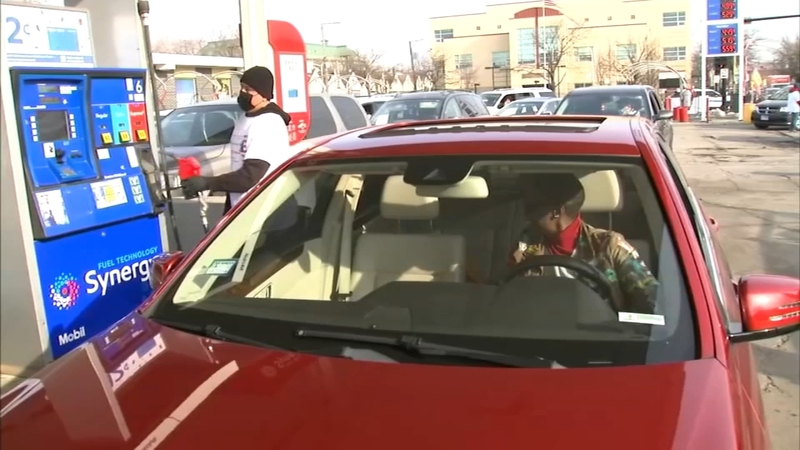 This time, his team intends for their second event to operate more like carefully choreographed, charitable, chaos.

"I had no idea that it was going to be this big," Wilson said, "but when it happened, it just exploded. And I was surprised like everybody else."

Cars can line up starting at 7 a.m. at 21 locations in Chicago, but not before, the Office of Emergency Management and Communications said Tuesday.

Each car can receive up to $50 in free gas, and each station will take in up to 400 cars. Stickers will be handed out to indicate position in line.

"This time, the volunteers are going to hand out numbers from 1-400," said Khalil Abdullah, the owner of multiple participating gas stations.

Chicago police officers are going to be set up throughout the city to help with traffic control.

"Lineup will begin at 6 a.m. No one will be allowed to enter the lines prior to 6 a.m. If you are there earlier, you will be asked to leave," said the Cicero Police Chief Jerry Chlada.

Wilson is planning to donate $1 million worth of gas to help people deal with the surging gas prices.

"There was a lot of people who didn't get a chance to. They stood in line," Wilson said. "I saw people in tears."

Last week's giveaway of $200,000 in free gas caused massive gridlock in the city.

"We think that it's going to go well, and let's hope that as many people can get gasoline tomorrow as possible," Wilson said Tuesday.

"We try to help the communities. Each station gets about 20,000, so hopefully people in the surrounding area can get the benefit of this," Abdullah added.

Park Forest police said they'll be directing cars through a residential area to avoid backup on the major thoroughfare.

"We found out about it Saturday afternoon so it's been kind of a rush to get things prepared," said Deputy Chief Paul Winfrey with the Park Forest Police Department. "It took the better part of the day to try and figure out the best route that will cause the least amount of impact to residents and businesses."

The Town of Cicero and the Chicago Police Department is also working with Wilson to mitigate traffic issues this time and ensure public safety.

"Last week, we really weren't given much notification. This time around, we had a few days extra to plan for this," said Rich Guidice, executive director for the Office of Emergency Management and Communication.

"All side streets south of Cermak Road, between Lombard and Laramie Ave, will be closed beginning at about 3 a.m.," Chief Chlada added.

"Best case scenario everybody is calm and polite and we get the cars lined up and we keep it moving quickly. And everybody enjoys the free gas," Winfrey added.

Although, a spokesman for Wilson said they had "a few" suburban locations decide not to participate Thursday "for their own reasons."

Those locations include Alsip and the Thorntons in Bellwood and Dixmoor.

The Posen Police Department posted to its Facebook page saying the gas giveaway is canceled there, as well.

It's all expected to last about four to five hours at each station.

With prices well above $4 a gallon in some places, Thursday's giveaway is something of a lifeline.

The stations will also lower their prices, so more people can partake, Wilson said.