Girl, 5, dies days after being rescued at Rainbow Beach Park 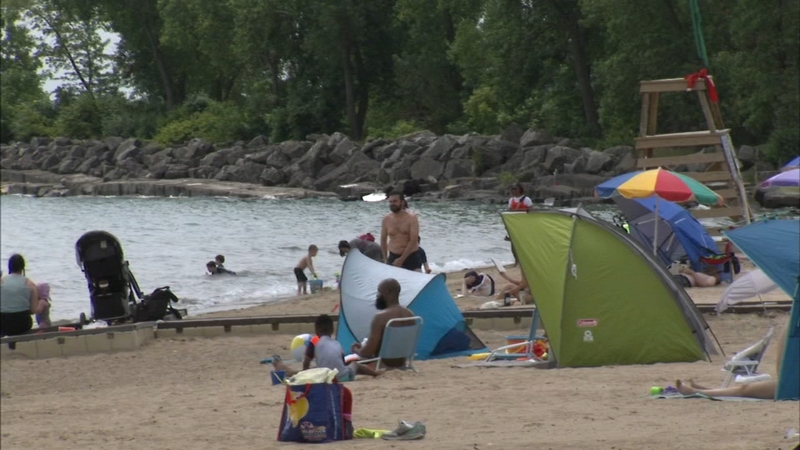 CHICAGO (WLS) -- A 5-year-old girl has died days after she was rescued from Lake Michigan last week at Rainbow Beach Park.

Amiyah Walker was found unresponsive in the water about 8:40 p.m. June 25 in the 3100 block of East 77th Street, Chicago police and the Cook County medical examiner's office said.

Kianti Champion, 19, who recently finished EMT training, heard calls for help and sprang into action to save Walker. Bystanders said Champion performed CPR on the little girl until paramedics arrived.

A recently-trained teen EMT tells how she sprang into action to save a 5-year-old girl drowning in Lake Michigan.

She was pronounced dead at 4:16 p.m. on June 28, the medical examiner's office said. An autopsy is pending, officials said.

Emergency responders say the girl's death serves as a reminder about the importance of safety in and around Lake Michigan as summer gets into full swing.

"A young child with very limited swimming ability could set into water over their head and just submerge," said Dave Benjamin, with the Great Lakes Surf Rescue Project. "No yelling, no waving, just they're there one second, gone the next."

The idea is terrifying. While many parents try to keep an eye on their kids and use flotation devices, accidents do happen. Drowning is the leading cause of death amongst school-age children.

Walker's death happened well after Chicago Park District lifeguards had gone off duty. While beaches are open from 6 a.m.-11 p.m., lifeguards are only on duty 11 a.m.-7 p.m.

"Sometimes we think, '8:30 p.m., it's night.' But it's not in the summer. It's broad daylight," said Halle Quezada, a water safety advocate.

Quezada was at Loyola Beach last year when 13-year-old Darihanne Torres was swept away by a rip current and drowned. It was 7:30 p.m. Torres' death moved Quezada to create an online petition to extend lifeguard hours in the city of Chicago to 30 minutes past sunset, mostly mirroring the hours that lifeguards kept prior to 2009, when hours were cut back in an effort to save the equivalent of $825,000 (adjusted for inflation).

"With every second that ticked on you're on the beach and you're helpless and you know a child is underwater and what can you do? Outside of the hours of 11 a.m.-7 p.m., there's zero prevention on our beaches," she said.