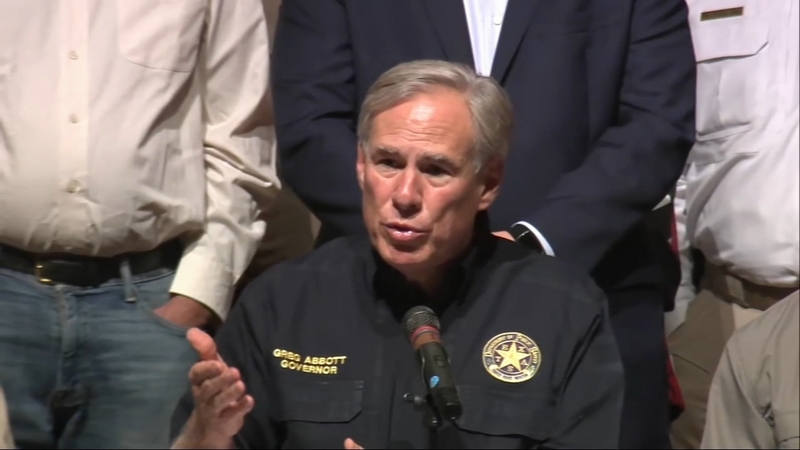 CHICAGO (WLS) -- Texas Governor Greg Abbott slammed Chicago gun laws, saying the city's approach is "not a real solution" as he faces questions and criticism after 19 students and two teachers were killed at an elementary school shooting in Uvalde, Texas Tuesday.

Many are questioning why the 18-year-old shooter was able to buy the AR-15, as well as tactical gear, that is said to have been used in the deadly mass shooting.

During a press conference Wednesday following the tragic school shooting that killed at least 19 students and two teachers at Robb Elementary School in Uvalde, Texas, the governor was asked about his stance on gun laws.

"I hate to say this, but there are more people shot every weekend in Chicago than there are in schools in Texas. And we need to realize that people who think that, well maybe if we just implement tougher gun laws, its gonna solve it," Abbott said. "Chicago and L.A. and New York disprove that thesis. And so, if you're looking for a real solution, Chicago teaches that what you're talking about is not a real solution. Our job is to come up with real solutions that we can implement."

Texas governor slams gun laws in Chicago, New York and LA. "If you're looking for a real solution, Chicago teaches that what you're talking about is not a real solution."

Illinois Governor JB Pritzker took to Twitter in response to Abbott's comments, saying, "Shame on you....You are lying about Chicago and what actually perpetuates gun violence. The majority of guns used in Chicago shootings come from states with lax gun laws."

Majority of Guns Used in Chicago Crimes Come From Outside Illinois: Report https://t.co/24aspQ9aKM

You are lying about Chicago and what actually perpetuates gun violence. The majority of guns used in Chicago shootings come from states with lax gun laws.

Mayor Lori Lightfoot also responded on social media, tweeting, "Instead of coming after my city, take a moment to think about how YOU can stop this carnage. I work day and night to stop the violence. I see the suffering. Open your eyes. Lives are being lost. Be a part of the solution or get the hell out of the way."

Gov Abbott, instead of coming after my city, take a moment to think about how YOU can stop this carnage. I work day and night to stop the violence. I see the suffering. Open your eyes. Lives are being lost. Be a part of the solution or get the hell out of the way. https://t.co/XBGs8Tq2W8

"It's a long-standing Republican trope to try and put a city like Chicago in their mouths and criticize us," Lightfoot said, visibly angry. "But the fact of the matter is, that guy needs to focus on taking care of business there."

She went on to criticize Abbott's approach to immigration in Texas, as well as flaws in the state's infrastructure following the deadly 2021 Texas winter storm power outages.

"He is the mere opposite of what we are trying to do here in our city. It's a long-standing republican troupe to try and put a city like Chicago in their mouths and criticize us."

"I hope the voters and citizens in Texas understand it is time for change," Lightfoot added.

Abbott made the comment shortly after former Democratic Rep. Beto O'Rourke, who is running against Abbott in the governor's race, interrupted the press conference, telling the governor, "This is on you."

O'Rourke approached the press conference stage after Abbott described the need for more mental health programs in the state that he said might have headed off the massacre.

"You are doing nothing," he said. "This is totally predictable when you choose not to do anything."

Many Chicago and Illinois leaders have also been reacting to the deadly mass shooting at an elementary school, prompting some to call for gun legislation.

"As a nation, we simply cannot allow this to continue. Every single day, children and young people are losing their lives to people who do not value the sanctity of life and take advantage of the unabated presence of firearms in our communities," Mayor Lightfoot said, in part, calling on elected representatives to pass gun control legislation. "Now more than ever, we must push our legislators to pass sweeping and effective gun control measures. Our children's lives depend on it."

The mayor also tweeted: " Protect our children, not our gun laws."

My heart breaks for the families in Texas. Our children deserve better. No child, wherever they are, should have to live in a world plagued by gun violence.

When 20 first graders were killed by a mass shooter at Sandy Hook Elementary 10 years ago, many thought the public outrage would prompt change. However, it did not. Since then, there have been 27 school mass shootings, killing 96 people and injuring 160.

"If we don't have uniform laws in a system with a free marker across the states, this will continue to be an issue," said Alexandra Filindra, UIC professor of political science.

Filindra, who is an expert on gun policy, said it doesn't matter how strict the gun laws are in Illinois, preventing gun violence must be done on a federal level. She said protecting gun rights with restrictive laws can co-exist. But all kinds of weapons became easier with a 2008 U.S. Supreme Court decision.

At this point, gun policy experts say the only way to prevent gun violence is massive mobilization among U.S. citizens, including gun owners to demand change.

"Since 2008, there has been a reinterpretation on what the Second Amendment means," Filindra said.

Dr. John Duffy, a clinical psychologist shares some guidance on how to handle trauma.

Filindra said the high court expanded the Second Amendment to elevate individual gun ownership as a constitutional right. According to the ATF, annual gun production increased from 3.9 million in 2000 to 11.3 million in 2020.

The Supreme Court is about to rule on another case that may loosen gun ownership rules even further.

A political analyst weighed in on criticism of Chicago violence and Mayor Lightfoot's casino discussion response.

"It would make it more difficult for states to impose restrictions on gun ownership," Filindra said.