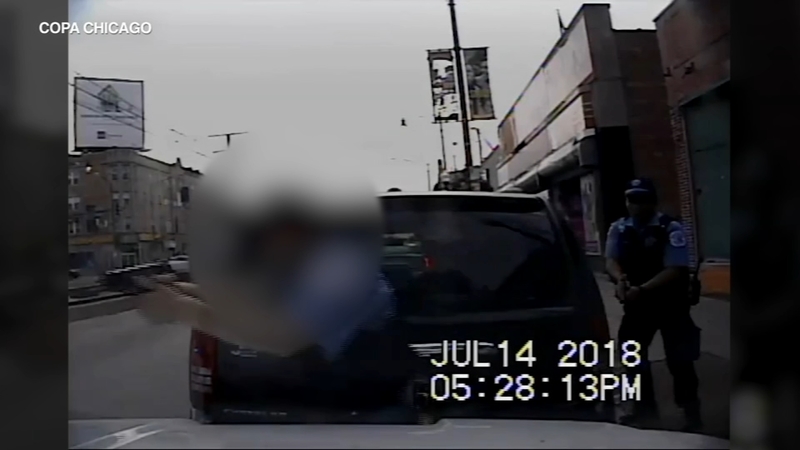 CHICAGO (WLS) -- Just three weeks ago investigators released new dash cam video showing the fatal shooting of Harith Augustus by Chicago police officers in the city's South Shore neighborhood. Why did it take so long to be released, and what can it tell us about the shooting?

The just-opened Chicago Architecture Biennial offers new insight into the shooting, which happened last summer. Immediately after the incident, the Chicago Police Department released body camera video of the shooting, in which Augustus appears to put his hand on his holster.

The shooting set off weeks of protests.

As part of the Biennial, Chicago's Invisible Institute and London-based Forensic Architecture did their own investigation into the shooting, examining all of the moments that went into what police called a "split-second decision."

They found video that was missing from the original police disclosure, which was recently made public by the Civilian Office of Police Accountability.

For the police dash cam you can see the officer firing.

"It seems the police department is trying to control the narrative," Varvia said.

"This is a dramatic reversal of perspective," said Jamie Kalven, of the Chicago Invisible Institute. "We can see what Harith Augustus saw."

COPA said Thursday they are reviewing the timeline of the video being released, and CPD's spokesman said "We will be opening an inquiry... This appears to be a clerical oversight between CPD and COPA investigators."

Mayor Lori Lightfoot's spokesperson said, "We are working with the Chicago Police Department (CPD) and Civilian Office of Police Accountability (COPA) to investigate what appears to be a violation of this strict video release policy."

"What I find hard to believe is that you wouldn't immediately know after a shooting like this that you have dash cam video," said Kalven.