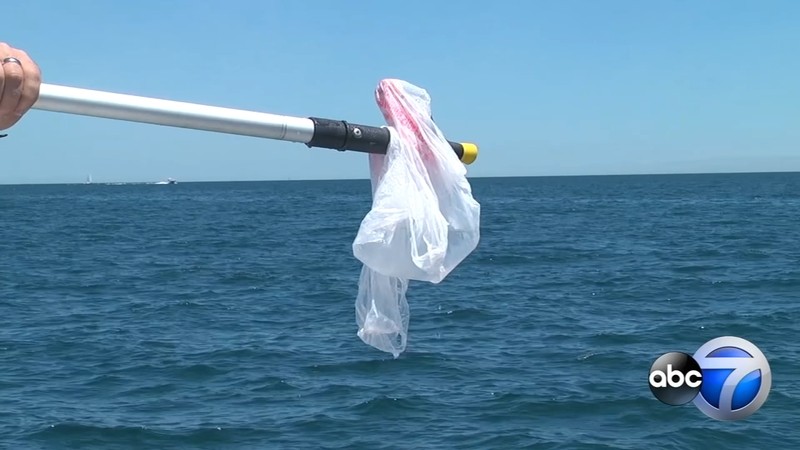 CHICAGO (WLS) -- Heading into July 4th, the American Sailing Association has a simple message for boaters cruising by pollution: "Pick it up and throw it away, you know, do your part," encouraged ASA-certified instructor Ryan Remsing of SailTime Chicago.

Shortly after starting the boat's engine, as we moved toward the mouth of Burnham harbor, Remsing pulled up next to a floating object.

"First piece of plastic, we didn't even leave the harbor yet," he said.

Minutes later: "We got some mashed potatoes," or their packaging, at least.

In less than an hour on the water, the two of us spotted and collected six pieces of trash.

The EPA says plastic debris is particularly concerning; and according to a 2016 study by the Rochester Institute of Technology, close to 22 million pounds of plastic makes its way into the Great Lakes each year.

"It can break down into small pieces and it makes it really easy for animals to mistake it as food and eat it.... It can actually fill up their stomachs and make them feel full and then they'll end up starving to death because they're not getting the nutrients that they need to survive and be healthy," warned Shedd Aquarium Conservation Action Coordinator Maddie Caldwell, adding, "They can also become entangled in the plastic or be harmed by it."

Beyond environmental concerns, Remsing said boat owners should be worried for their vessels.

"These plastic bags and balloons and what not can get sucked up into our cooling systems, overheat engines, and really create a dangerous situation for a boater," he cautioned.

According to Remsing, ASA recommends boaters simulate a "crew overboard" drill. After spotting trash, you should maintain eye contact with the debris and help the captain steer alongside the trash before grabbing it up and tossing it in the dumpster back on land.