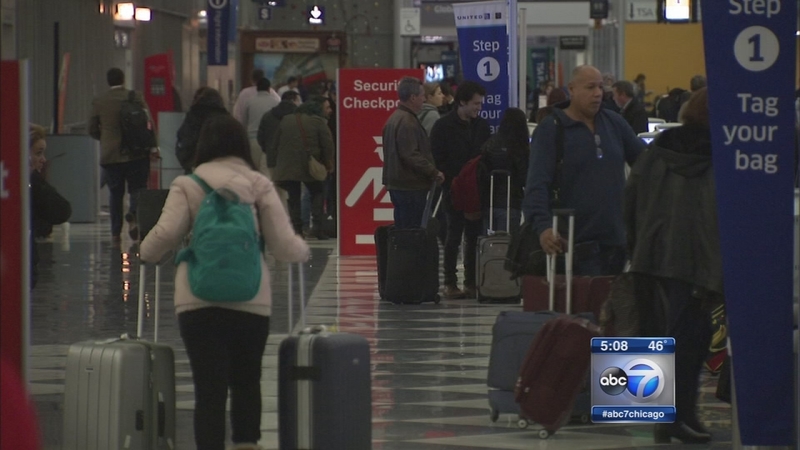 CHICAGO (WLS) -- Before travelers can join in the Thanksgiving family feast, they have to reach their destinations. And this holiday, about 47 million Americans are expected to take to the sky, the rails and the roads.

That's the most number of travelers in eight years.

More than two million holiday travelers are expected to pass through O'Hare and Midway airports between Wednesday and next Tuesday, the Chicago Department of Aviation said.

Both airports are expecting more passengers than last year. Jeanenne Tornatore, an Orbitz.com spokesperson, said travel is up 6 percent this year because airfares are down.

At O'Hare Airport, the crowds started to build early. Travelers seem undeterred by the heightened security alert issued Tuesday by the U.S. Department of State.

"I got up at 3 a.m. and that was too early for me," said Courtney Ebeby, who is flying to Montreal.

O'Hare is expected to have the second most travelers pass through the airport during this holiday travel period. Sunday is expected to be the busiest travel day at both O'Hare and Midway with 241,000 passengers traveling through both airports combined.

"According to Orbitz booking, Chicago is actually the number one booked destination for Thanksgiving weekend," Tornatore said.

Travelers heading to both airports were advised to allow for extra time to get through security.

"Be on alert as you travel through these airports. We tend to get into that vacation mindset, but we still need to be diligent and alert as we travel," said Beth Mosher, AAA.

There is also more of a police presence at Union Station, where Thanksgiving Eve is the busiest day of the year for the railroads. Metra is also adding extra service Wednesday afternoon for passengers who plan on leaving work early because of the holiday. The Sunday and holiday schedule will be in effect on Thursday.

It's the preferred way to travel for the Hutter family, who is heading from Michigan to Kansas.

"This has been great. I certainly prefer this than the airplane - it's not so busy and less hassle," said Lorraine Hutter, a train passenger.

"Across the system we're expecting upwards of three quarters of a million people traveling on Amtrak over the Thanksgiving period," said Derrick James, Amtrak.

Driving instead of flying? Many people will be on the road with you.

Many travelers are giving thanks this holiday for lower gas prices, with the national average at $1.99 a gallon. It's the cheapest it's been since 2004.

"Definitely a nice surprise when you walk up to the pump and you see that it's about 50-60 cents cheaper than it normally is," said Jamonti Robinson, a motorist.