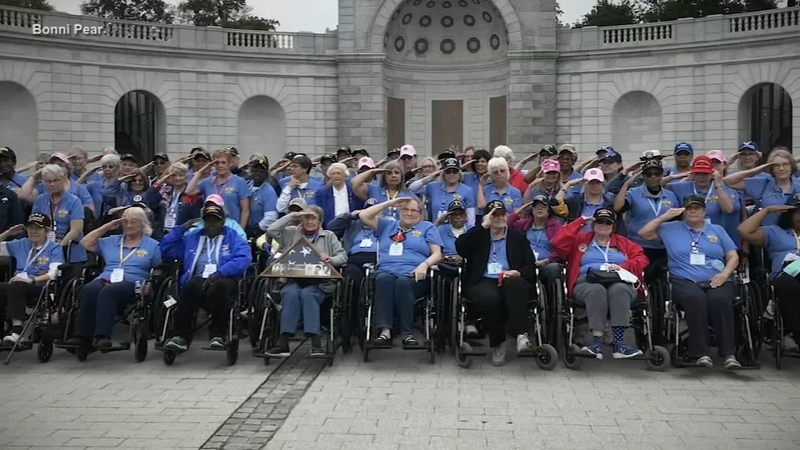 "It's amazing I think all of the women are elated to be a part of it," Crump said.

For the 93 women who took part in the flight, Crump said the event "is like their parade" because many did not originally have a parade. The participants range in age from 63 to 104 years old, including veterans who served in World War II, Korea and Vietnam. Crump added that many people have thanked the women for their service and asked questions, learning to "understand women serve too now."

"I think it's going to be very moving looking forward to the women's military museum," Akins said. "I'm excited to see everything I can."

The trip was arranged by Operation HerStory, an organization that helps arrange honor flights for women veterans. Army veteran Denise Carson said she came to the organization because of the women who joined the military before her. She said those women opened up opportunities for her to do non-traditional jobs in the Army.

"They didn't have a voice," Carson said. "It's up to those of my generation, younger generation to be that voice for all of us. That's our responsibility."
Report a correction or typo
Related topics:
societychicagomidway airportveteranshonor flightgood newsmidway airportchicago proudveteransouthwest airlineswomen
Copyright © 2022 WLS-TV. All Rights Reserved.
CHICAGO PROUD
Josephine 'Mother' Wade featured in new cookbook
'Our way of giving back': Family makes care packages for homeless
Chicago saw stories of hope in 2021 amid COVID-19 challenges
Maywood native turns football into film passion
TOP STORIES
5 tax changes that can boost your refund this year
Chicago weather forecast includes snow into Monday | Live radar
After the omicron wave, what's next for the COVID pandemic?
`Dreadhead Cowboy' pleads guilty to animal cruelty charge
19 shot, 4 fatally, in Chicago weekend violence
Sen. Kyrsten Sinema formally censured by Arizona Democratic Party
St. Charles library closes after threats over mask policy
Show More
1 hurt in I-290 shooting in Oak Park: ISP
Rescuers use sausage dangling from drone to lure runaway dog to safety
National Pie Day: What is the official Illinois pie?
Girl, 8, killed by stray bullet ID'd: ME
Can science slow down or reverse the aging process?
More TOP STORIES News