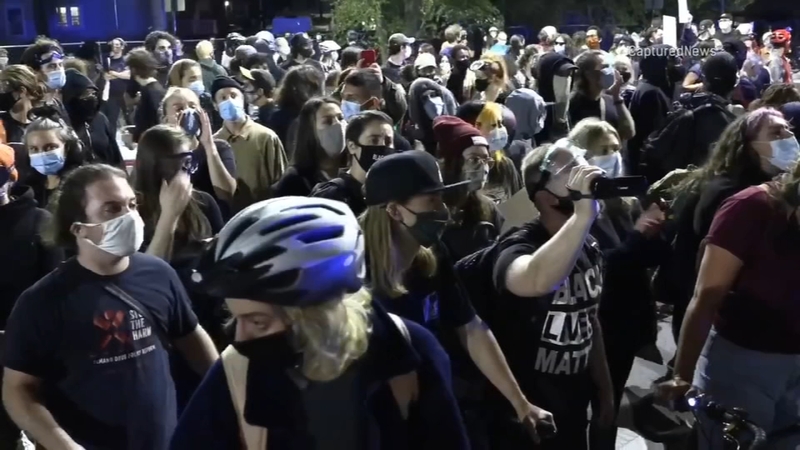 Hundreds took to the streets to protest the grand jury's decision, including a protest in Wicker Park that then moved into Logan Square. The group stopped at a police station and then in Logan Square, someone spray-painted "BLM" for Black Lives Matter and Breonna Taylor's name on a monument.

At one point, a couch in the middle of the street was set on fire and officers put it out and removed it.

The Illinois National Guard was put on standby in case the protests turned violent.

Hours earlier, there was anger and outrage on the South Side. Marchers blocking the intersection of 79th and Racine streets, shouting the name Breonna Taylor.

Father Pfleger even wrote Taylor's name in fake blood on the street.

The protest and march kicked off at St. Sabina church and was organized by Father Michael Pfleger.

Meanwhile, outside Chicago Police Headquarters at 35th Street and Michigan Avenue, there were more cries for justice.

"It hurts me that she didn't get the justice that she deserved," said protester Anna Acosta.

"The moment when we see such inhumanity justified by our legislators, system...I think we always have to be shocked and outraged," said protester Tanya Watkins.

"I think things can change, absolutely. I think people keep fighting because they have hope."

Chicago police said there has been at least one arrest from the protests. More demonstrations are planned for the coming days.

ABC 7 Legal analyst Gil Soffer offers insight into the decision by a Kentucky grand jury not to charge officers directly in the shooting of Breonna Taylor.

Chicago Police Superintendent David Brown speaks after the decision to to charge Louisville police officers for the death of Breonna Taylor.

While the protests in Chicago were mostly peaceful in Atlanta, Georgia State Patrol deployed tear gas against demonstrators in the downtown area

It was a much calmer scene in Sacramento. Protestors marched down the street without incident. Much of the violence erupting in Louisville where two police officers were shot
in Milwaukee law enforcement deployed tear gas to order people off Interstate 94