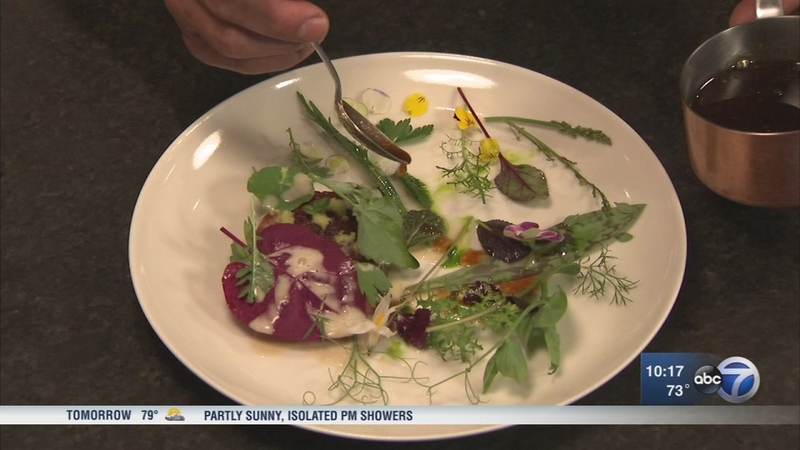 CHICAGO (WLS) -- Most of Chicago's top-tier restaurants work with a series of local farmers, but a new restaurant in Chicago's West Loop neighborhood is cooking at a four-star level, relying primarily on just one farm near Bourbonnais.

At The Farm, Al Papineau tills the soil, while his wife Rebecca clips some Orach in a raised bed garden.

"When it's wet, the water beads up on it really neat," Rebecca said.

The retired couple farms for fun, but now they also supply Smyth - as well as the more casual The Loyalist downstairs. The Farm is the sole supplier for Chef and Owner John Shields, the result of a tweet he sent out, asking if anyone could find black walnuts.

"Sent out a tweet, does anybody know where I can get some," said Shields.

Elliott Papineau responded, saying his folks had a farm that could meet his needs.

Not just produce, but eggs, herbs and honey.

Shields and his wife, Karen, work together in the kitchen, and have free reign at The Farm.

"This land is so diverse, this area and what they're growing here and all the things that are wild; even right here, that it just allows for so much creativity really," said Shields.

Shields is as much a botanist, as he is a chef.

"He's taught me a lot about things that you can forage and that are edible, that I didn't even know, that I've probably been pulling out of my garden," said Rebecca Papineau.

And for the Shields', having Al and Rebecca hand-pulling things just for them, preserves the integrity of the harvest.

"The level that she takes clipping the herbs, the lettuces, pulling the vegetables is the same level of care I put to the plates," said Shields.

At the restaurant later that day, Shields has a broad palette to work with. Wild black raspberries hide beneath a whipped yogurt meringue, topped with an egg yolk that's cured in salted licorice, topped with some fennel fronds and wild cicely.

Asparagus is roasted and shaped into a small quenelle, then fresh, soft cheesee and an asparagus puree are plated next to it.

"...and then we add a little spinach until it's real tender, strain all the butter out, save that butter and then we blend the asparagus," said Shields.

"Even though it looks like a lot of little touches - and it is - they're very subtle. All of those flavors are kind of just soft and of the same," he said. "You're really not adding extra flavors, you're just kind of reinforcing the ones that are already there."

Now a lot of restaurants make a big deal about changing their menu every season, but because of this relationship between The Farm and Smyth, whenever something grows or comes in and is ready to be picked at The Farm, that will impact the menu here, and this time of year, that could be almost every day.

In this week's "Extra Course," ABC7 food reporter Steve Dolinsky talks about two of the unique desserts served at Smyth, utilizing some of the produce from The Farm.
EMBED More News Videos

In this week's "Extra Course," ABC7 food reporter Steve Dolinsky talks about two of the unique desserts served at Smyth, utilizing some of that produce from the farm.