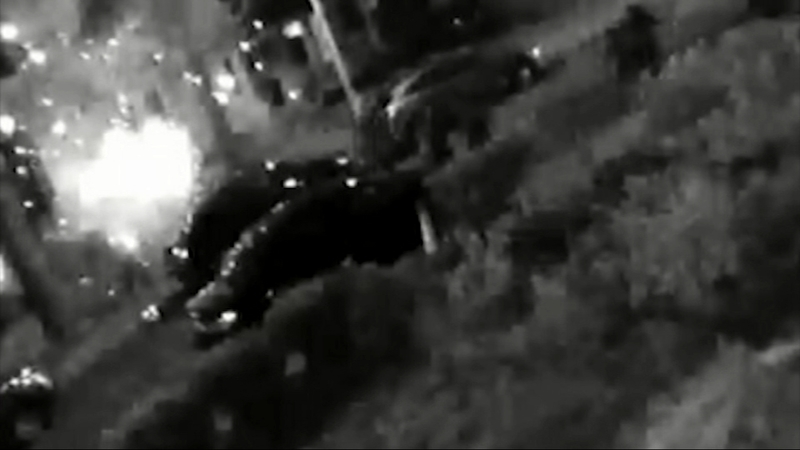 CHICAGO (WLS) -- Cars were smashed and some even set on fire by a large group of teenagers in Chicago's Hyde Park neighborhood Wednesday night.

The chaos erupted between 53rd and 55th Streets and University and Lake Park Avenues.

One older model Mercedes was charred on the inside and another car had a hole in the backseat where a fire cracker melted deep into the upholstery.

Neighborhood cameras captured the block teeming with young people; so many that residents said all they could really do was stand by and watch.

"It is terrifying," Hyde Park resident Sara Diwan said. "You just don't even know what to do."

Diwan was inside her home with her children when she heard a loud explosion in her yard and found a hole in her siding and that her windows had been broken.

"We heard fire whistles go off and my son-in-law came down and said 'They're burning cars on the street,'" he said.

At about 9:30 p.m., large groups of teenagers could be seen on cell phone video causing mayhem in the Hyde Park neighborhood as police on bikes moved them down the 5400-block of South Ridgewood Court. The teens vandalized cars and homes as they moved though, even throwing small explosives.

"As we were told by the sergeant, there was a large number of kids and they were trying to divide them into smaller groups which supposedly would be less dangerous," Diwan said.

Car owners pulled concrete blocks out of their cars Thursday morning and assessed the damage in the daylight.

"It's upsetting, you know," said a resident named Matt. "I don't know the motivation. I have to feel that there's a lot of frustration that these kids feel too. I think, I don't know, I don't understand it."

Teen Halloween at the Promontory hosted more than 400 teenagers Wednesday night a few blocks away. An organizer for the event called it a huge success in a message to the neighborhood, but it also criticized local officials saying, "After last year's incredible grassroots action, I was optimistic we could work with local officials to bring Halloween night closer to our vision of a teen-led, adult-supported street festival. Unfortunately it became clear that their main objective was to protect the retail corridor on 53rd and their stance towards teens was ambivalent at best. We had deep concerns about their strategy and the potential for conflicts to escalate and spread to the surrounding areas. It broke my heart to see and hear everything that happened outside tonight. This was all preventable."
"If you look at the timeline of the trouble, it did not start when our event ended," said Dr. Rachel Cane, an organizer of Teen Halloween.

Residents complained that for the past two years, the Halloween event brought violence and vandalism. Timothy Dooling said it caused him to leave the neighborhood.

"This year, many of them apparently did not have Halloween masks, and that was true last year as well. They were not here for Halloween, they were here for mayhem," he said.

"Hyde Park is just a beautiful place and a gentle place and stuff invades places that are peaceful and gentle," Mihalacki said.

One 18-year-old man and 11 minors were arrested at about 7:15 p.m. Wednesday in the 5300-block of South Lake Park Avenue "after they were observed throwing eggs, golf balls and punches" at other attendees at a Halloween festival, according to a statement from Chicago police. They also allegedly disobeyed an order by officers to "disperse and cease their actions."

It was unclear whether this incident was related to others that occurred in the 5400-block of South Kimbark and South Kenwood Avenues, in which a large group of teenagers damaged multiple cars.

One student was walking in the 5550-block of South University Avenue at about 10:35 p.m. when a large group approached the victim and stole his wallet, cell phone and keys and struck him with their fists. The victim declined medical treatment.

Immediately following, the group battered a second student walking at 1115 E. 56th Street before fleeing in various directions. The second student was transported to the University of Chicago for treatment, U of C police said.

In a statement, a U of C spokesperson said, "In anticipation of increased activity during Halloween, the University of Chicago Police Department (UCPD) worked closely with the Chicago Police Department (CPD) to increase staffing and patrol units on campus and in the neighboring communities. UCPD officers in the area responded immediately to the reported incident on campus, leading to the detainment and arrest of several juvenile offenders."