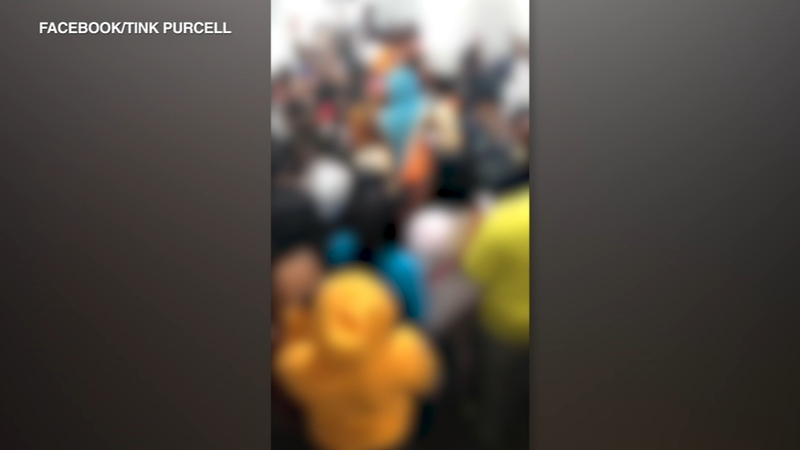 CHICAGO (WLS) -- After a video surfaced allegedly showing a large house party in Chicago, Illinois Gov. JB Pritzker warned that those violating social distancing guidelines are "literally putting everyone around you in danger."

Gov. Pritzker responded to the reports of the house party at his daily COVID-19 briefing Sunday.

In the video, dozens of people are seen packed shoulder to shoulder inside what is believed to be a Chicago home. While some guests are wearing masks, most are not.

The Facebook Live video was recorded around midnight Saturday, and it's gone viral with over 1 million views already.

Chicago police issued a statement about the social media video, saying they are aware of its existence. But the department hasn't been able to pinpoint the location of the party, even though toward the end of the video someone appears to yell that police are on the way.

"We are aware of a video circulating on social media depicting a large house party inside of an alleged Chicago residence. While we cannot authenticate the nature or location of the gathering, we want to remind everyone of the social distancing requirements in place. CPD will disperse crowds in violation of social distancing requirements, and if necessary, issue citations or as a last resort, enforce via arrest," a CPD spokesman said.

According to comments made on the Facebook Live video, the party may have taken place somewhere on the city's West Side.

Police said that even if officers were called to break it up, it's possible no paperwork was filed.

"What was depicted on the video was reckless and utterly unacceptable," Lightfoot said in a statement on Twitter. "While most Chicagoans are doing their part to prevent the spread of COVID-19, reckless actions like these threaten our public health and risk erasing the progress we have made. We will hold those responsible accountable."

"The fewer people who comply with the 'Stay At Home' Order, the sicker our residents will get and the harder it is for us to recover," she said.

From March 25 to April 23, Chicago police officers have broken up 4,673 gatherings, arrested 12 people and have written 17 citations.

Gov. Pritzker recently extended the stay at home order, which bans public and private gatherings of more than 10 people who are not members of the same household.

Illinois' coronavirus death toll reached just under 2,000 over the weekend.

Illinois health officials announced 2,126 new COVID-19 cases and 59 additional deaths on Sunday. There are now 43,903 cases confirmed in the state, including 1,933 deaths.

Illinois is cutting back on beds for COVID-19 patients at the McCormick Place alternative care facility.

Gov. Pritzker is pointing to some signs of encouragement in the fight against COVID-19.

The state is cutting back significantly on beds for COVID-19 patients at the McCormick Place alternative care facility.

According to state officials, they no longer need so many beds due to the slow growth of coronavirus cases in the state.

The governor said they're going to move some of the hired staffing for that facility to other areas.