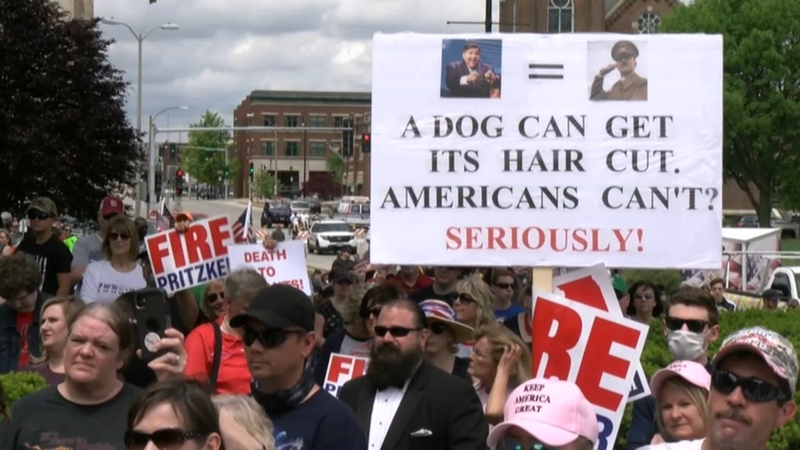 CHICAGO (WLS) -- Illinois remains on track to enter Phase 3 of the reopening plan in just over a week, but Gov. JB Pritzker took heat Monday for authorizing the use of a misdemeanor citation for business owners who open early.

Illinois health officials announced 59 additional deaths and 2,294 new cases of COVID-19 on Monday. That brings the statewide total to 96,485, including 4,234 deaths.

Gov. JB Pritzker laid out details Monday of a new contract tracing system to be launched with local health departments in the next few weeks. Improving contact tracing, which helps identify and locate anyone who's been in contact with a COVID-positive patient, is a step the governor has said is crucial to reopening the state.

Following a weekend of protests, in Chicago and Springfield, the governor accused some of spreading hate and fear. Things got personal when he spoke about some of the hate-filled messages that have directed at him.

"I have to admit that I am worried about my family's safety. You saw some of the signs, you saw the vehemence that people were carrying those signs with swastikas and pictures of Adolph Hitler, references to me and my family," Pritzker said. "Yeah, I'm concerned. But I also want you to know that I am undeterred from the path we're on. I think we're doing the right thing."

Amid continued defiance from some business owners, the governor authorized a new enforcement tool Friday allowing violators who open too early to be charged with a class A misdemeanor, punishable by fines of up to $2,500.

Some Republicans called that heavy-handed, but the governor said it is actually a tool that would allow a lesser penalty for violators.

"But I can tell you, I just think this is wrong. People think it's wrong," said State Sen. Bill Brady, Senate GOP Leader. "We can and need to unify ourselves to bring ourselves together. This is just for division."

Ahead of this week's special session in Springfield, state GOP leaders said they want hearings on the reopening plan.

"This gives us an opportunity to have a fluid discussion of why the governor is requiring that Illinois be put into four regions, rather than 11 regions," Brady said.

"There is a growing dissatisfaction... of the governor trying to play not only the executive role, but also the legislative role," said State Rep. Jim Durkin, House GOP Leader.