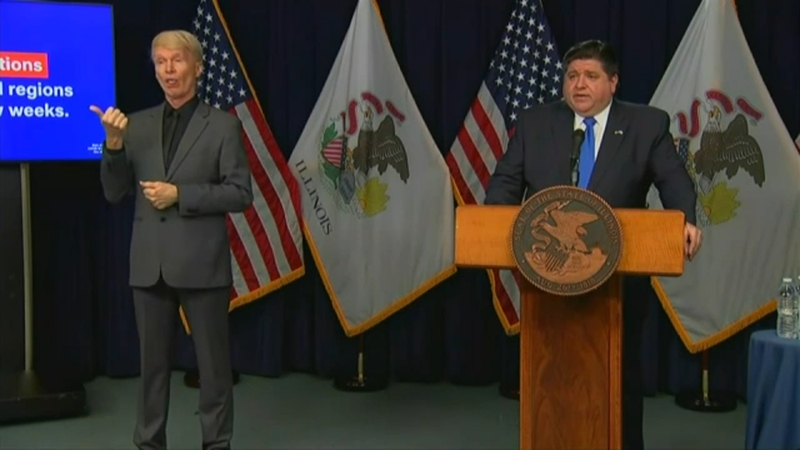 Gov. JB Pritzker said in his daily COVID-19 update Monday that he would keep Tier 3 mitigations in place across Illinois for th next few weeks.

Over a 24-hour period, officials said the state processed 66,980 specimens. In total there have been 10,497,998 test specimens tested since the start of the pandemic in Illinois.

Officials in Illinois and across the nation pleaded Americans to limit travel during the Thanksgiving holiday to help prevent the surging coronavirus outbreak from spreading farther and faster.

"We may see a surge upon surge. You know, we don't want to frighten people, but that's just the reality," said Dr. Anthony Facui. "We said that these things would happen as we got into the cold weather and as we began traveling."

On Monday after the Thanksgiving weekend, there were long lines at some testing sites - and an expectation they'll only get busier.

"For those of you who did spend Thanksgiving with others outside your immediate household, I would urge you to get tested later this week," said Dr. Ngozi Ezike, Illinois. Dept. of Public Health.

Though the number of people in Illinois hospitals has decreased slightly in recent days, fewer than a quarter of the state's ICU beds are available.

Officials say Illinois' declining positivity rate could be an indication some mitigations are starting to work, but there's concern that could be reversed in the coming days.

After millions took to the skies for Thanksgiving, the governor grounded any hopes for an easing of restrictions.

Health care workers will be the first priority, but Gov. JB Pritzker is promising equity will be a consideration in who gets it as vaccines becomes more widely available.

As people return home from traveling for Thanksgiving, Illinois officials ancticipate a surge in COVID-19 testing demand followed by a spike in new cases.

"People will drive through an enclosed facility," explained Chris Hoff, DuPage County Director of Community Health Resources. "Our goal is to get people in and out as quickly as possible, that this provides an extra level of safety for staff, they're going to be working outside for months to help people get tested. We want to make sure that they have a place to do that."

Doctors recommend people wait a few days before getting tested, as well.

"Three to five days is really important. If you did go and see people, and were unmasked; we know that this happens. And if that's what happened, please get tested three to five days after you had your encounter," said Dr. Rahul Khare, Innovative Express Care.

But millions of people disregarded the warnings and left home this week. Experts fear it will mean even more infections and deaths in the coming weeks at a time when colder weather is forcing people indoors and closer together.