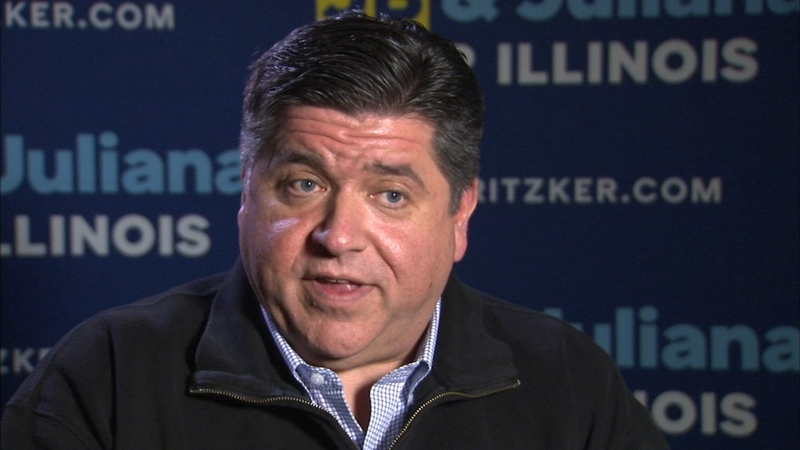 CHICAGO (WLS) -- A day after JB Pritzker was elected to be Illinois' next governor, he talked about his plans for the state.

In a one-on-one interview on Wednesday, the 53-year-old Democrat said his top priorities include raising wages and creating jobs.

"There was a real blue wave and I think the mandate is to put Springfield and the state back on the side of working families," Pritzker said.

The billionaire businessman defeated incumbent Gov. Bruce Rauner with more than 50 percent of the vote.

Pritzker takes office Jan. 14. Until then, he plans to make regular announcements about his plans. His transition team will be led Juliana Stratton, his lieutenant governor.

The state's Democratic wave, which included the election of Kwame Raoul to attorney general and Susanna Mendoza to comptroller, also gave Pritzker a super majority in both the Illinois House and Senate.

Pritzker and the Democrats also will have the pressure to get things done with pensions, the budget and other issues.

"I'm gonna work across the aisle with everybody and we've got to make sure we're addressing these challenges together. The partisan rancor is over in Springfield I'm not gonna allow it in my administration and I hope the republicans will work with me," Pritzker said.

But on the touchy issues of taxes and how much they will have to be raised, Pritzker still would not provide answers.

"I'm gonna start with listening to the legislature and making sure we're putting their concerns up front and most of all I've set out principals, as you know that the middle class and those striving to get to the middle class get a tax break," he said.

Stratton promised the transition team is inclusive and diverse.

"And so when you look at the co-chairs of our transition team, including Governor Edgar for example it's an example of the type of administration we want to have and the type of leadership we'll provide," said Lt. Governor-elect Juliana Stratton.

Democrat J.B. Pritzker, is getting ready to thank voters after getting elected governor of Illinois.

Earlier Wednesday, Pritzker greeted voters and thanked his supporters for all their help at the CTA station at State and Roosevelt.

Pritzker dumped millions of his own money into his campaign, making it one of the most expensive governor's races in U.S. history.

"In Illinois we have a history of building ourselves up from broken places and the bonds we form in the process become the steel girders that hold us all together," Priztker said. "There is a special faith in the future, a light that burns in people who know both the agony of the hill and the freedom of the hilltop. As your governor, I will want to hoist that light high and let it show us the way."

Governor Rauner ran an aggressive campaign which attacked Pritzker at every turn, but nothing seemed to stick. Rauner conceded less than an hour after polls closed.

When asked if Rauner did anything right, Pritzker said: "Well, I think he dedicated himself to the state and I disagreed with him on virtually everything, I guess, but I will say, I guess I think he thought he was doing the right things for the state."

Tuesday night at the Drake Hotel, Rauner addressed his supporters, thanked voters and sent a message to Pritzker.

"Mr. Pritzker, I said, 'God speed. I hope and pray you serve Illinois well and I look forward to assisting, with full effort, for a smooth transition,'" Rauner said.