Judge's ruling against Illinois school mask mandate 'has potential to shut our schools down': IEA 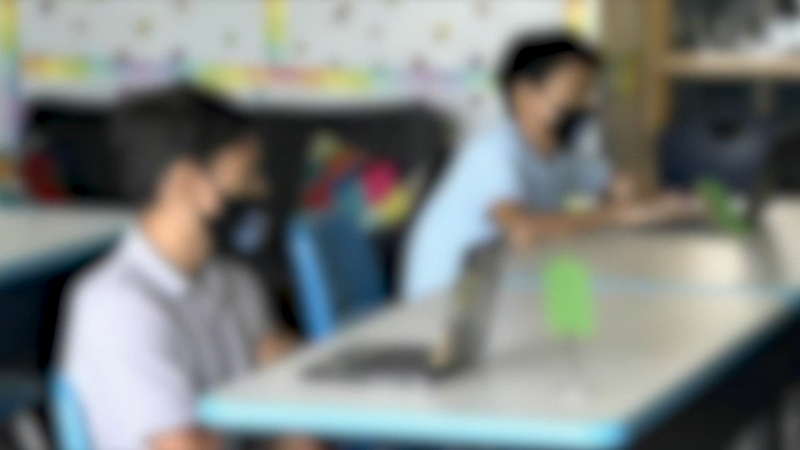 SANGAMON COUNTY, Ill. (WLS) -- A downstate Illinois judge ruled against the state's school mandates, including masking, in response to lawsuits involving parents and teachers from more than 150 districts.

The decision could result in school shutdowns, the Illinois Education Association warned Saturday.

"This decision has the potential to shut our schools down, effectively closing our school buildings and perhaps being potent enough to stop in person learning altogether," the Illinois Education Association said in a statement. "The teacher and education employee shortage is at a crisis level. Schools are shutting down because they do not have enough healthy employees to safely hold classes even though staff continue to give up their plan time and lunches to cover classes."

The Chicago Teachers Union issued a statement on the ruling Saturday, saying they expect Mayor Lori Lightfoot and Chicago Public Schools to "act responsibly" and uphold their agreement to require masks at school and provide KN95 masks for every adult and child.

"We should not have to fight every inch for basic protection, but such are the times in which we live, where the few can trump the safety of the many," CTU said in a statement.

CPS later released a statement saying the court's ruling does not prohibit the school district from continuing its COVID-19 mitigation policies and procedures, including universal masking, and that the district "will stay the course."

Elgin Area School District U46 said Saturday its superintendent, administrators and legal counsel are in the process of reviewing the judge's decision.

Archdiocese of Chicago Catholic Schoolsalso sent out a letter to families Saturday saying that they are "closely monitoring the case." They also point out that they have been complying with the governor's order, "because it has applied to all schools in Illinois whether public or private."

The letter said once the case is concluded and a final decision is rendered, the Archdiocese will determine whether to make masks optional.

Gov. JB Pritzker said late Friday he is seeking an expedited appeal. In the past, he has been successful in overturning similar challenges to his use of emergency powers. But for now, this ruling is significant and could impact thousands of schools.

Attorney Tom DeVore represents hundreds of Illinois students and parents and several dozen teachers across more than 150 districts, including CPS and some suburban school systems who filed suit against the state's school mandates for vaccination, testing, and masking.

In granting them a temporary restraining order, Sangamon County Circuit Court Judge Raylene DeWitte Grischow said the mandates violate the plaintiffs' "due process rights under the law which provide them a meaningful opportunity to object to any such mitigations."

"This is a very strongly-worded opinion which is essentially accusing the governor, the executive branch, of doing an end run around the statutory scheme in trying to avoid judicial review in pushing through these emergency regulations," ABC7 legal analyst Gil Soffer said.

The order applies to the plaintiffs - those students, parents, and teachers who sought relief - but it could have broader implications.

The judge wrote: "Any non-named Plaintiffs and School Districts throughout this State may govern themselves accordingly."

Gov. JB Pritzker vowed an immediate appeal Friday night, saying: "The grave consequence of this misguided decision is that schools in these districts no longer have sufficient tools to keep students and staff safe."

For now, it's unclear what school districts are going to do come Monday. CPS declined to comment Friday night. The Illinois Federation of Teachers is calling on districts to continue their current practices.

Governor Pritzker has asked the Illinois Attorney General's office for an immediate appeal of Judge Grischow's decision to restrain the State from enforcing the safety measures aimed at protecting teachers, school personnel, students and communities from COVID-19.
The Attorney General is seeking an expedited appeal from the Fourth District Illinois Appellate Court.
"The grave consequence of this misguided decision is that schools in these districts no longer have sufficient tools to keep students and staff safe while COVID-19 continues to threaten our communities - and this may force schools to go remote," said Governor JB Pritzker. "This shows yet again that the mask mandate and school exclusion protocols are essential tools to keep schools open and everyone safe. As we have from the beginning of the pandemic, the administration will keep working to ensure every Illinoisan has the tools needed to keep themselves and their loved ones safe."
"We remain committed to defending Gov. Pritzker's actions to mitigate the spread of COVID-19 and will appeal this decision in the Illinois Appellate Court for the 4th District in Springfield," said Attorney General Kwame Raoul. "This decision sends the message that all students do not have the same right to safely access schools and classrooms in Illinois, particularly if they have disabilities or other health concerns. The court's misguided decision is wrong on the law, demonstrates a misunderstanding of Illinois emergency injunction proceedings and has no relation to the record that was before the court. It prioritizes a relatively small group of plaintiffs who refuse to follow widely-accepted science over the rights of other students, faculty and staff to enter schools without the fear of contracting a virus that has claimed the lives of more than 31,000 Illinois residents - or taking that virus home to their loved ones."
Since the beginning of the COVID-19 pandemic, the Pritzker administration has implemented mitigations and programming to protect the health and safety of students, teachers, and staff in schools. To facilitate safe in-person learning, the administration has provided schools across the state with 3.8 million masks for students, teachers, and staff as of January 12th. The State has completed over 2 million COVID-19 tests in schools through the SHIELD program and sent more than a million rapid tests into schools outside of the City of Chicago. Recently, the State provided 350,000 rapid tests to Chicago Public Schools to facilitate a return to in person learning.
To increase access to the lifesaving COVID-19 vaccination, the State has held 1,767 on-site vaccination clinics in schools and day camps with an additional 470 clinics already scheduled. Vaccinations, boosters, mask-wearing and testing are the key to keeping schools open and to maintaining safety standards for staff and students alike.

Full Statement from Illinois Federation of Teachers
The Illinois Federation of Teachers is greatly distressed at the judge's temporary restraining order (TRO) in this case. Hundreds of thousands of students, teachers, and staff across Illinois are doing their best to remain healthy and keep schools open. We believe what the judge ordered today is legally faulty and a threat to public health and, most importantly, a threat to keeping Illinois schools open for in-person learning. Our children and their families need certainty and some normalcy at school, not legal wrangling managed by a small minority of citizens.
We urge the judge to stay her ruling and the state to appeal it as soon as possible. In the meantime, we will continue to advise our members on how to remain safe and healthy at work. We insist that school districts statewide abide by existing agreements on health and safety. In fact, the safety mitigations encompassed by the State's guidance, as well as vaccinations for children and adults, are the best ways to keep schools open and everyone healthy. And we will stand with our local unions to protect our members and the students they serve.
Report a correction or typo
Related topics:
health & fitnessillinoisface maskschoolscoronavirus illinoislawsuit
Copyright © 2022 WLS-TV. All Rights Reserved.
LAWSUIT
Amber Heard cross-examined about fights with Johnny Depp
IL Facebook users could see payment soon from $650M settlement
Jury sees pics of Heard's swollen face after fight with Depp
Couple longing for grandchild sues son, his wife
TOP STORIES
Mother charged after student, 7 injured when gun goes off at school
NY teen found dead in SC after 13 years; Sex offender charged
Man, 19, charged in Lincoln Park Chicago shooting, robbery
COVID reinfection likely to become more common, experts say
Chinese plane crash that killed 132 possibly intentional: US officials
New Jersey beach sand collapse leaves teen dead, sister injured
Chicago Weather: Rainy, cooler to the north Wednesday
Show More
Pentagon now reports about 400 UFO encounters: 'We want to know wha...
Lightfoot defends Millennium Park youth curfew after 'Bean' shooting
IL Facebook users could see payment soon from $650M settlement
Why your summer vacation is costing more this year
Chicago's 22nd Police District hosts first-ever 'wellness fair'
More TOP STORIES News