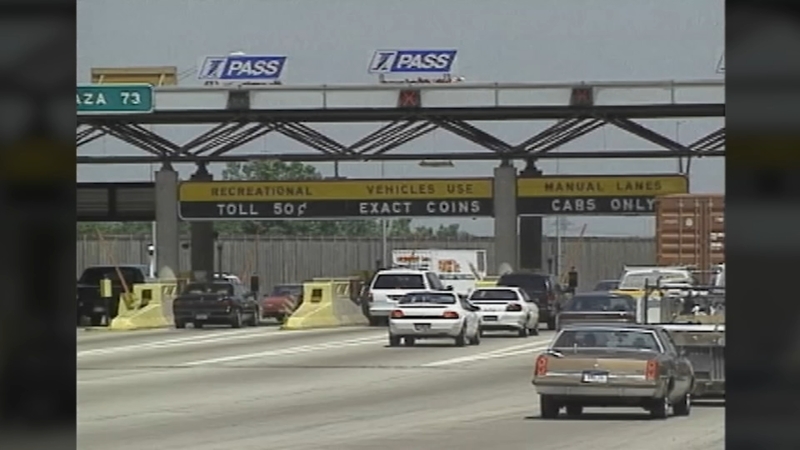 CHICAGO (WLS) -- As we continue with our special 30th anniversary celebration of the morning newscast, Roz is covering 30 years of transportation! In part two of a four part series, Roz takes a look at the Illinois tollways over the past three decades.

The first Illinois tollways opened in 1958 and Roz started reporting on them in 1989 and has basically seen them evolve for almost half its lifetime!

Today there are 294 miles that make up the five Illinois tollways. In 1989, two of them hadn't been built!

"I-355, the central portion between I-55 in the south and 290 in the north was the first new interstate built in quite some time," said Illinois Tollway Chief Engineer Officer Paul Kovacs.

It was a very different process, building through a suburbanized area. We had the privilege of driving on the new tollway before it opened to the public in December 1989! A few years later, I-355 became the first tollway to use I-Pass. Within a handful of years several plazas were adding I-Pass express lanes, which led the way for open-road tolling.

"In 2005 we took a huge leap and decided that we were gonna make all of our main line systems, all of our primary routes be able to drive through and not even know you're driving beneath a toll plaza," Kovacs said.

The other new tollway, Rt. 390, began as a freeway: the Elgin-O'Hare-Expressway, which didn't go to Elgin, or O'Hare. The tollway took over the project around 2013.

"We opened the first stretch in 2016, it's the tollway's first all-electronic roadway," said Illinois Tollway Chief Planning Officer Rocco Zucchero. "We're continuing to move east, we'll be into O'Hare somewhere in the 2023 time frame, that's our target and building a bypass around O'Hare Airport by the end of '25."

The Tri-State was widened at both the south and north ends and is currently getting extra lanes in the mid-section.

The last time lanes were added to the central Tri-State was some 27 years ago. The current widening project between 95th and Balmoral is the reason the O'Hare Oasis and eventually the Hinsdale Oasis have to go.

Speaking of the Tri-State, it wasn't until 2014 that an interchange was built partially connecting I-57 to I-294. Construction to make it a full interchange starts this year!

Big upgrades came to I-90, with the recent widening of 62 miles, from O'Hare to Rockford! Looking toward the future, the tollway made this a smart road, with overhead gantries giving rea-time traffic information to drivers. With all the changes over 30 years, I was lucky to have a go at being a toll collector before those plazas disappeared, for a special job swap series we did in the early 2000's!