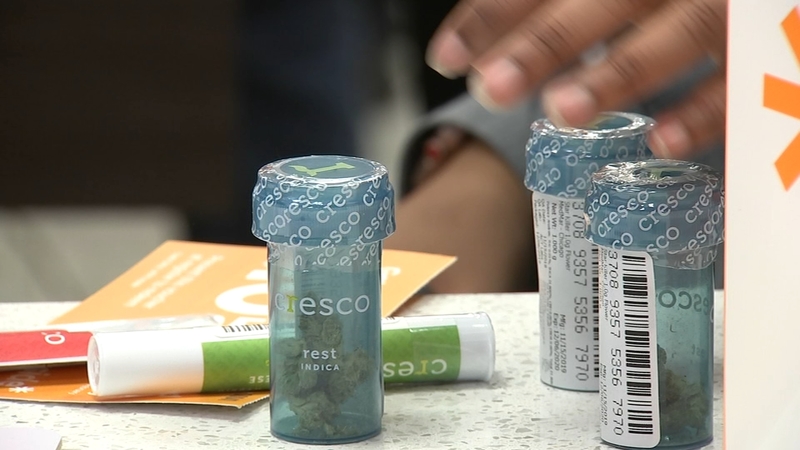 CHICAGO (WLS) -- New Year's Day marks the beginning of a new era in Illinois with recreational marijuana now legal, and some dispensaries ran into problems with software to track sales.

Illinois residents 21 and older can now buy up to 30 grams of marijuana plant material, edibles with up to 500 milligrams of THC and five grams of cannabis concentrate items. If you're visiting the state, you can buy half those amounts.

"I got some gummies, some chocolates, I brought lot of stuff," said Demetrius Triplett, customer.

You can't smoke pot wherever you want. You can consume weed in your private residence and local jurisdictions may allow on-site consumption at dispensaries. It is also illegal to cross into Indiana and Wisconsin with marijuana.

Dispensary 33 in Andersonville made the first recreational sale in the state when their doors opened at 6 a.m.

"It's a lot of people and they are buying at an intense rate," said Paul Lee, operations manager at Dispensary 33.

Once inside, a pot paradise full of marijuana flower, chocolate bars, and gummies were available.

"It looks like an Apple store, to be honest," said customer Nicole Denton. "It is so nice in here."

Lee said while the dispensary stocked up on product in advance, they could still run out of some things by Wednesday night.

"We started with thousands of individual edibles, but again, a lot of people are buying the max, so they are buying five edibles at a time," he said.

And people are spending a lot of money, too.

"To go into a couple hundred dollars is easy, and I have seen a few thousand dollar tickets," Lee said.

Mission Dispensary in South Shore also opened its doors at 6 a.m., where there was a massive line of people hoping to be among the first to buy recreational marijuana legally, with one couple camping out in a tent overnight.

"It's just a historic day, and now that it is legal and less frowned-upon I think it's better for everybody," said Titus Ruscitti, customer.

More than 40 marijuana dispensaries around the state are approved to sell recreational weed.

There were similar scenes at the more than 50 sales locations across the state.

"Since it's legal here, I don't have to deal with shady people anymore. I can deal with the actual establishment," he said.

In Wrigleyville, customers waiting to purchase marijuana at Sunnyside Dispensary could fill out order forms at a neighboring coffee shop while they waited.

The lines outside Sunnyside Dispensary in Wrigleyville began forming around 3 a.m., three hours before adult sales of recreational marijuana began.

"Today is all about having fun and breaking the ice, so have a great day," said Cresco Labs Senior VP Adam Fitting as he opened the door for the waiting lines of customers.

There were cheers, high fives, and a lot of smiles as sales got rolling.

"It's like a dream come true that I'm actually buying it legally," said Jackie Ryan after making her purchase.

"What a time to be alive," one man said while standing in line.

"Ready to get high," said another man as he headed inside.

And Sunnyside did their best to prepare for the demand.

"This is a day that we've been anticipating so we've been doing everything possible to make sure the supply is here to meet the demand," said Cresco Labs Co-Founder and CEO Charlie Bachtell.

Among those on hand was Lieutenant Governor Juliana Stratton.

"I made a purchase," she said. "I have Mindy's glazed clementine orange gummies."

We asked if she planned to partake.

"Well, I might try one. It's legal in Illinois," Stratton replied with a laugh.

The long lines outside this dispensary continued throughout the day, so much so that police had people lining up across the street waiting for their turn to get inside

To keep the sales process from becoming disjointed, customers filled out order sheets while they waited in line.

"Part of it was just me being here to see the show and be a part of history, so three hours is how long we waited but we were only outside for about forty minutes," said Jaime Gamez, who spent $150.

"I got a chocolate bar and what else do we have here, a little pre-roll, and some gummies, I'm a real big sweet tooth guy," Gamez said.

"Probably just going to smoke these and then see where the day goes I guess," said David Rankin with a smile as he left the dispensary.

For those who made the trip, and endured the long lines, this day provided a sunny side to the start of 2020.

There were long lines, but happy customers, at marijuana dispensaries in the suburbs on New Year's Day.

Rise Mundelein, the Illinois dispensary closest to the Wisconsin border, opened its doors bright and early Wednesday morning and a line stretching down the block has been there ever since.

"I have been waiting 15 years for this," said Kevin Kveton, customer. "I did time for this stuff. I did prison time, so the fact that you can do this now is awesome."

Thousands of people lined up at suburban dispensaries for the first day of recreational sales, and waited for hours.

"I am in line for a historic moment in Illinois," said Kenny Green, customer. "It's a big deal. I am very happy."

"Me and my dad are long time smokers, and I just wanted to enjoy the experience with him," said Veronica Etherton, customer.

"I have been in line for two and a half hours already, probably another hour to go," said Zac Zannini, customer.

"Similar to what our grandparents went through in the 20s with liquor," said Jay Johnson, customer. "This is prohibition. This is freedom day."

"It will dissipate over time," he said. "We have been part of the legalization in Nevada and Massachusetts, so we understand day one is a surge, but it will continue. There is a lot of demand for this product."

Isaiah Miller came from Kenosha. He hopes Wisconsin will become the next state to legalize recreational marijuana.

"Five years ago no one would have thought Illinois would legalize weed like California," he said. "Look where we are now. Everyone is outside looking to buy marijuana. It is going to happen eventually."

Kveton believes times are changing. He got in line at 7 a.m. and four hours later left with more than pot.

"I made new friends. I got a dozen new friends that I met in line," he said.

By evening the line outside Rise Mundelein was still hours long. The dispensary closes at 10 p.m.

Politicians across the state also celebrated the monumental day.

"This is something that has been part of our society, but has been overly criminalized, especially in black and brown communities," said State Representative Celena Villanueva (IL-21st District).

City and state leaders say the sales of recreational cannabis will help invest money back into the neighborhoods that were plagued by the war on drugs.

"It's really good for spurring more economic development," said 40th Ward Alderman Andre Vasquez. "We have an opportunity to be socially equitable with this."

Illinois dispensaries have encountered problem's with the state's tracking software on the first day of recreational sales.

Problems entering sales into the BioTrackTHC tracking system caused some problems at the dispensaries.

"We are basically not able to register concentrates right now as adult use sales or one concentrate at a time," said Mission Dispensary president Kris Krane. "It does seem like flower sales are not impacted."

Shortly before 8 a.m., Krane said the problems were resolved and the system was fully functioning. He said they had to shut down all sales for about 20 minutes to deal with it.

Illinois Cannabis Czar Toi Hutchinson said she will be keeping a close eye on the situation. She said the state made sure cultivators boosted their capacity to prepare, but did acknowledge that a shortage is possible.

"This is just the beginning of what the legalization roll out is going to be and we anticipate we will work through the glitches in the system as they happen," Hutchinson said. 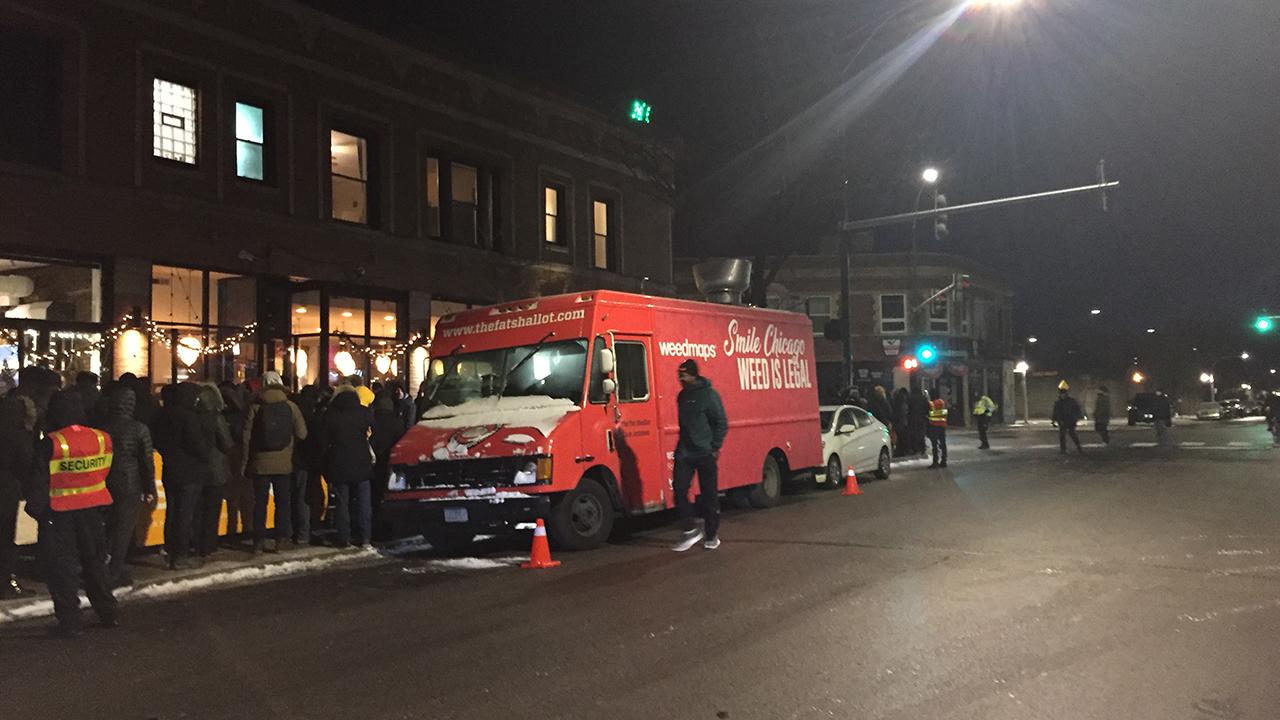 Customers line up to buy recreational marijuana at the Sunnyside Lakeview dispensary.

Watching and monitoring the first day of legal marijuana is the best the state can do, she added.