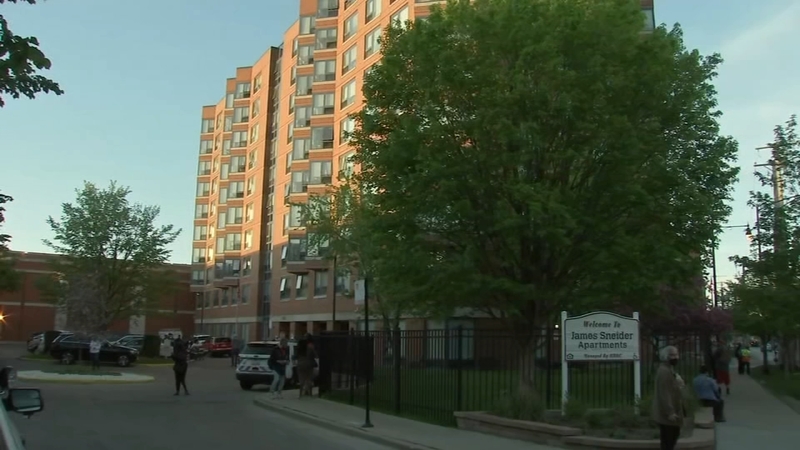 CHICAGO (WLS) -- Two families have filed lawsuits against the owner and manager of a senior building on Chicago's North Side after three women were found dead there after days of high temperatures.

The family of Janice Reed, 68, who died inside a Roger's Park apartment building during an early spring heat wave, is now suing the building's owners and management company for keeping the heat on despite blazing temperatures.

Reed, 58, was one of three people who died in the Roger's Park apartment building in unseasonable sweltering temperatures May 14.

"Janice asked for help. She went downstairs, and she asked for help like I did," said Lorna Barnes, another resident at the James Sneider Apartments.

Reed's son and the family's attorney held a news conference at 9 a.m. Tuesday, formally announcing the lawsuit for wrongful death and negligence.

Reed's only child, Veldarin Jackson Sr., recalled walking in and finding her.

"He unlocked the door, and we went in and my mom was laid out on the bed dead, and even then it was hot," Jackson said. "It's like my best friend, mom; mom was my father, my mother, my best friend, I mean just everything."

Attorneys for Jackson said the temperature inside her apartment topped 100 degrees when she was discovered.

"These buildings need to be held accountable; sometimes you have to use common sense. My mother-in-law died senselessly," Adjoa Jackson said.

"His trust has been betrayed because the James Sneider Apartments apparently put profit over safety," Crump said.

Attorney Larry Rogers Jr. said residents and elected officials told the building about the unbearable heat, but nothing was done before the deaths.

"They're deciding financially not to turn on the air because it costs more money; that's what it appears to me," Rogers said.

Building operators said they were complying with ordinances that require heat be turned on in buildings until June 1.

Osborne, Reed and Delores McNeely, 76, all died in their Rogers Park homes. The 49th Ward Alderman Maria Hadden said the ordinance had been misread and misunderstood.

"They believe they had to keep the heat on because the city ordinance requires it? It is absurd and if that is true this is it negligence this is willful intentional conduct," said Steve Levin, attorney for Osborne's family.

"The problem would have been if they had turned off the heat system they can't turn it on the next day. It doesn't work that way," said 2nd Ward Alderman Brian Hopkins. "So that's the reason they were reluctant to turn it off, was because the ordinance required them to keep it on on-mode all the way until June 1."

"Let each individual building decide when they wean to disable the heat system, and if they have a central air conditioning system. If they do they can activate it at that time," Hopkins proposed.

Osborne's family has hired high-profile attorney Ben Crump and will hold a news conference Tuesday afternoon about another potential lawsuit.

In a statement, the building's owners said:

"Hispanic Housing Development Corporation is a leading, not-for-profit advocate for those who need affordable housing in Chicago and the Midwest. For 46 years, HHDC has focused on building and maintaining quality affordable housing for working-class families and vulnerable individuals - senior citizens, people with disabilities, veterans and women with children. We have built 4,200 homes and preserved 1,700 affordable units. We currently manage 10,200 units. Our goal is to help provide economic stability and housing security to people who need it most.

"We are deeply saddened by the deaths of three women who made our James Sneider Apartments their home. We mourn the loss of Janice Reed, Gwendolyn Osborne and Delores McNeely and send our deepest sympathies to their families and friends.