The man, who may be living in the Chicago area, allegedly attacked a federal officer with wasp spray and smashed windows
WLS
By Chuck Goudie and Ross Weidner, Barb Markoff, Christine Tressel 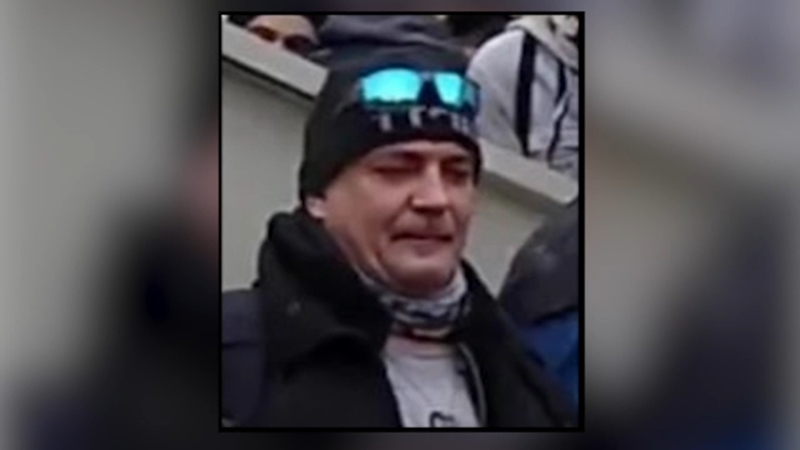 CHICAGO (WLS) -- The FBI is asking the public to help identify a man suspected of assaulting an officer during the Jan. 6, 2021 attack on the U.S. Capitol.

The man, who may be living in the Chicago area, allegedly attacked a federal officer with wasp spray and smashed windows at the Capitol.

Federal agents said they've determined from tips that the man lives in metro Chicago; but despite several clear photos, they apparently don't know specifics, including his name.

In an FBI posting, photos show a white man with a medium to heavier build. He is seen wearing white and black gloves, a cap with "Cahartt" on the front, reflective sunglasses, a multi-toned gaiter and a black hooded coat.

Federal authorities believe he is right-handed.

Also, according to the FBI, he used a police-style baton to smash Capitol windows, allowing throngs of rioters to get into the building.

"Somebody will ID him, because if his history is in Chicago, that means there's a number of people in Chicago-work, family, church -- fill in the blank -- that know this guy," said former FBI agent Brad Garrett.

Garrett, an ABC News law enforcement consultant, told the I-Team this is a case where investigators work backward.

"It's like watching a crime drama, where you actually see people commit a crime; harm a police officer, tear something down, because you may think, I may recognize this picture, but there's no way my neighbor, my uncle, my father, could have done that. But when you actually see them do it, it changes your whole reality about 'oh my goodness, he actually did do what the FBI is alleging he did,'" Garrett said.

It's been 441 days since the insurrection and nearly 800 people have been charged, including 28 from Illinois; 11 from Indiana; 5 from Wisconsin.

Despite that, the FBI has page after page of suspects still unidentified and "in the wind," as agents say.

"When you identify one person, you may then identify three others because so many people went to this gathering with other folks or other folks knew that they were going to this gathering. So when you hit one, you may hit more people. And so that's the whole idea here of using the media and using posters, whatever visuals the FBI can get out to further identify people," Garrett explained.

Garrett said he wouldn't be surprised if authorities are able to answer the question "who is he" in the next day or two.