Series of hearings will include what is billed at never-before-seen video of violent Capitol riot
WLS
By Chuck Goudie and Barb Markoff, Christine Tressel and Ross Weidner 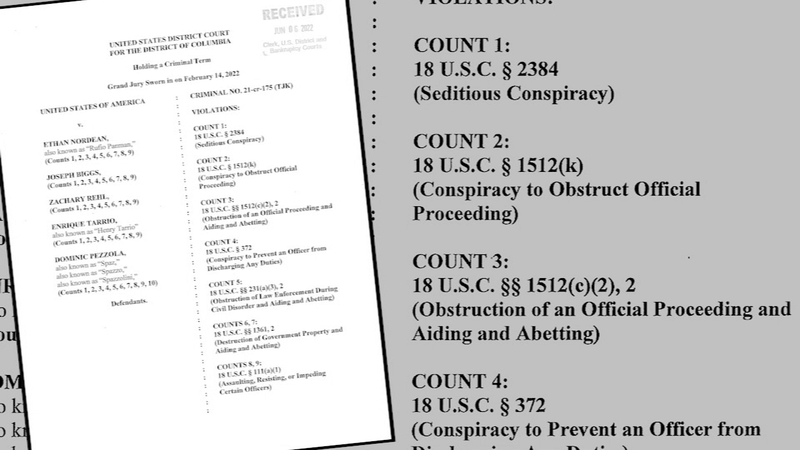 CHICAGO (WLS) -- It was 17 months ago that out-manned police were taking aim at some violent attackers inside the U.S. Capitol.

This week, guns gave way to questions that will be aimed at finding answers to how that dangerous and deadly day played out on Jan. 6, 2021.

There is a new round of seditious conspiracy charges against several members of the Proud Boys group and two more Illinoisans are also facing charges.

What played out in real time that afternoon on Jan. 6 will receive prime time TV treatment on Thursday. It's the first in a series of hearings that will include what is billed at never-before-seen video of the violent attack.

Rep. Bennie Thompson, D-Miss., the chair of the House select committee investigating the Capitol riot, said the public needs to hear from people under oath about what led up to Jan. 6.

"What occurred on January 6 was definitely a dark day for our country. Our challenge is to get to the facts and circumstances that created it," said Thompson.

Outgoing Illinois Congressman Adam Kinzinger is one of two Republicans on the special committee. Rep. Liz Cheney, R-Wyoming, is the other.

She said the panel has firsthand testimony that former President Donald Trump watched the riot unfold from the White House and dismissed repeated pleas from his daughter, Ivanka, to intervene.

SEE ALSO | Indiana man pleads guilty, admits to being in US Capitol during January 6 insurrection

"It's hard to imagine a more significant and more serious dereliction of duty than that," said Cheney.

A key question is whether the attack was part of an orchestrated effort by then-president Trump and his top aides to overturn the 2020 Presidential Election.

"They're not conducting a legitimate investigation. It seems as though they just want to go after their political opponents," said House Republican Leader Kevin McCarthy.

The hearing will be against a backdrop of more than 820 arrests across the U.S. along with new seditious conspiracy charges filed Monday night against former Proud Boys leader Enrique Tarrio and four far-right operatives, including Dominic Pezzola.

Most of those charged, including 30 in Illinois, are facing lesser counts. Two Chicago-area women are among them.

Trudy Castle and her relative, Kimberly DiFrancesco, are the latest Illinoisans arrested.

The I-Team has not heard back from either Castle or DiFrancesco and there are no appearance dates or attorneys listed for either of them in federal court records.