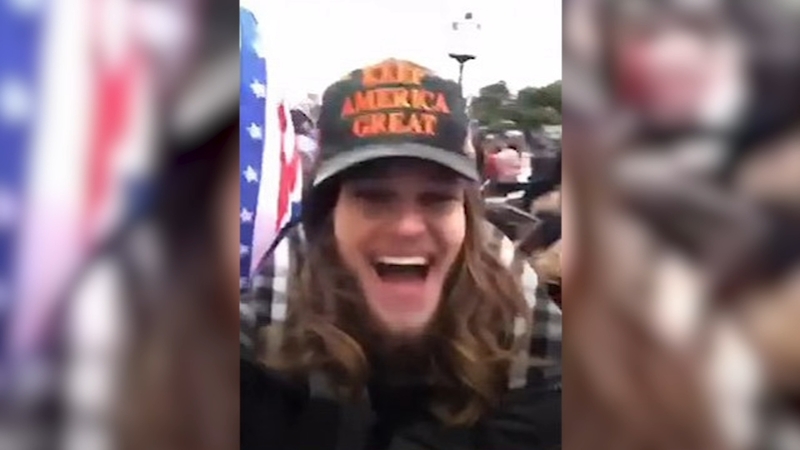 CHICAGO (WLS) -- Just after sunrise on Tuesday federal agents arrested a North Shore man who is Illinois' latest resident charged in the Jan. 6th uprising at the U.S. Capitol.

Christian Kulas, 24, of Kenilworth, is at least the ninth person from Illinois to be charged in the Capitol breach, and the third from Cook County.

Kulas' face and a video clip have been plastered all over social media for five months. The North Shore man wore a modified MAGA hat reading "Keep America Great," and posted smiling selfies from the day of the siege.

Christian Kulas posted extensively on social media about entering the US Capitol on January 6 before federal charges were filed against him.

A number of websites have latched onto the pictures since then, wondering why Kulas hadn't been arrested, but he was at his family's home in Kenilworth early Tuesday morning.

He is charged in Washington DC with unlawful entry to a restricted building and disorderly conduct on Capitol grounds, both misdemeanors.

But former federal prosecutor and ABC7 legal analyst Gil Soffer says the government is motivated by a message.

In addition to numerous public tips, authorities said they matched Kulas to various scenes inside the Capitol through the distinctive Burberry scarf he'd had popped around his neck.

Federal prosecutors said Kulas also posted a number of videos allegedly shot on Capitol Hill on Jan. 6, including one in which he is seen enjoying the moment.

He appeared in federal court in Chicago Tuesday afternoon. The judge ordered he be released to and remain in his mother's custody, who agreed to supervise him and ensure he followed all conditions of his release. Two firearms in Kulas's home were requested to be removed from the residence; court records show they both belong to Kulas' father.