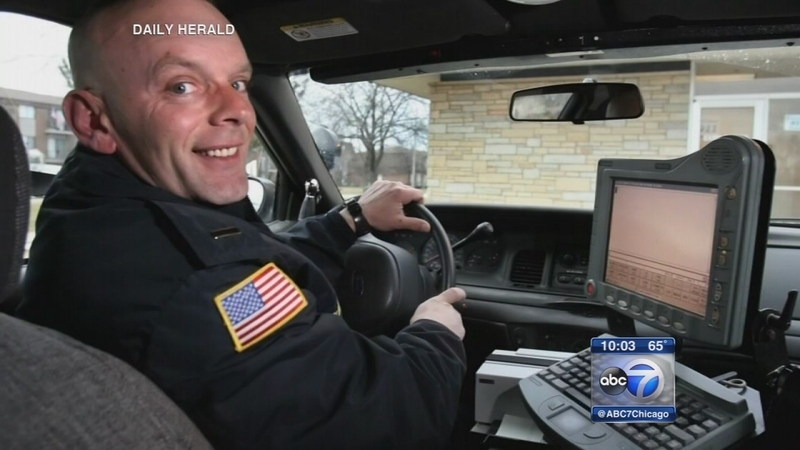 "Gliniewicz was looking to speak with this high-ranking motorcycle gang member to initiate a hit on the village manager," Detective Christopher Covelli said.

The village manager, Anne Marrin, was in the process of auditing the Fox Lake Explorers, a community education program from which Gliniewicz had stolen $50,000.

"It's very unsettling. My concern is my family. It's quite unbelievable and almost surreal," Marrin said. Marrin said she and Gliniewicz had very few interactions, most of which she said were "pleasant."

"It's a very scary thought that an officer sworn to uphold the law would even think to do that to an administrator," Marrin said.

Covelli said investigators recovered a deleted text message from April in which Gliniewicz asked about arranging a meeting with the gang member, who denied everything when questioned by police. In another text, Gliniewicz also mentioned the possibility of planting something on Marrin. Filenko said packets of cocaine were found in Gliniewicz's desk, but he does not know if they were to be used as a plant on Marrin.

"It was a theory. Nothing we can prove. We can't prove that's what the cocaine was going to be used for. However, we have this unaccounted for cocaine and a text message about planting things, so of course it was a theory we had to look into," Covelli said.

On Wednesday, officials announced Gliniewicz staged his own suicide to look like a murder scene in an attempt to cover up the years of embezzlement. Police are now looking at who else knew about the criminal activity. His wife, Melodie, and one of his four sons are under investigation, an ABC7 I-Team source said.

"I ask our residents to be patient and allow the investigations to continue. The amount of evidence that has been examined is enormous. We are still conducting audits of our policies and procedures that will take time. I would rather have a thorough investigation of our practices than a hasty one," Mayor Donny Schmit wrote in a letter to the editor of "The Daily Herald."

Now, groups who raised money for the family are responding to requests for refunds and the Fox Lake Board of Trustees is commenting on what could happen to Gliniewicz's pension.

Melodie Gliniewicz has not filed for survivor's benefits, trustees said. If she were to do so, the board would then convene for a hearing to discuss her claims, according to a statement, and "it would be inappropriate at this time for either the Pension Board, its individual trustees, or its legal counsel to comment any further with respect to additional questions concerning this matter or with respect to Ms. Gliniewicz's continued eligibility or entitlement to a survivor's pension pursuant to the Illinois Pension Code."

Kim Crawford organized a fundraiser for the Gliniewicz family.

"People have good and bad in them. And I understand that. But the extent that this goes- not just taking his own life, but the other alleged activity that goes along on this is really hard to believe," Crawford said.

The three men who were early persons of interest after Gliniewicz's death are also speaking. During his final radio call, the officer identified three suspects - a two while males and a black male.

"He tried to pin it on us," said Thomas Corso.
Officials believe that Gliniewicz may have seen Corso, Preston Shrewsbury and Manuel Vargas walking on Route 12 on his way to the field where he eventually killed himself. Preston Shrewsbury said he'd met Gliniewicz on the street in the past and that he knew him by name.

After being identified on surveillance video, they were taken into custody by police and questioned.

"Fifteen of them, assault rifles," Shrewsbury said. "They rip his blanket off, said do you have any weapons on you?"

The men were eventually cleared because of a restaurant receipt that gave them a solid alibi.

"I don't sleep at night because I have all these dreams of these cops," Vargas said.

The ABC7 News I-Team has uncovered details about Lt. Gliniewicz's conduct while employed at the Fox Lake Police Department from his personnel file, which was obtained via a Freedom of Information Act request. The file does not indicate if he faced disciplinary action for the complaints.

- A group of Fox Lake police officers wrote a letter to the mayor detailing complaints against Gliniewicz in February 2009.

- Complaint that he was found "highly intoxicated" in public.

- Complaint that Gliniewicz used his squad car to take his family to Wisconsin for a vacation.

- Complaint about him getting a free tattoo while on duty.