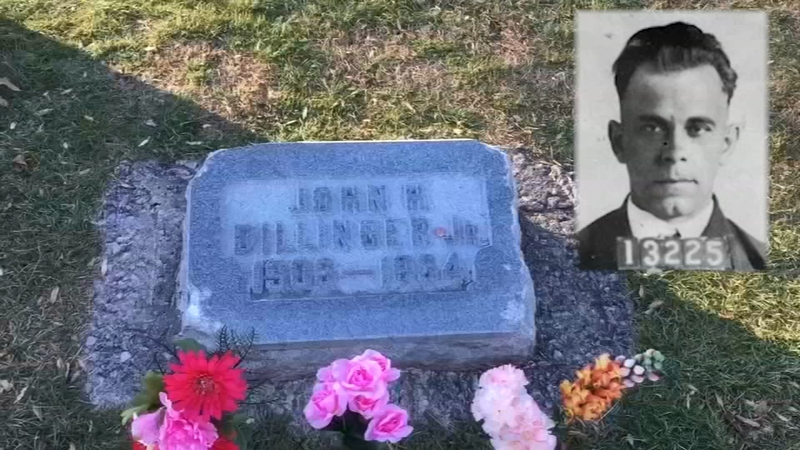 INDIANAPOLIS (WLS) -- Infamous outlaw John Dillinger will rest in peace after all, at least for the time being, following an Indiana judge's decision that shuts down a New Year's Eve exhumation plan.

Dillinger, the notorious gangster who was gunned down in 1934 by G-men outside Chicago's Biograph Theater, has been buried in a gravesite near Indianapolis for more than 85 years.

A declared Dillinger nephew, Michael Thompson, has a state permit to dig up the body for DNA testing to determine whether it is that of the criminal. The permit would allow exhumation on Dec. 31.

"I just want the answers for the truth ... all these years there's been rumors ..." Thompson said on Wednesday.

Chuck Goudie and the ABC7 I-Team report that John Dillinger's case has been disputed for decades.

Crown Hill Cemetery, home of Dillinger's grave, has tried to block removal of the remains, claiming it would be a public spectacle, disruptive and potentially unsafe.

Thompson had filed a lawsuit against the cemetery, which in turn lodged a motion to dismiss.

Following a hearing in Marion County Superior Court on Wednesday morning, Judge Timothy Oakes granted the cemetery's dismissal motion. Judge Oakes said in his ruling that the cemetery must consent to any exhumation under Indiana law.

"Mike Thompson has a legitimate reason for learning the identity of the person in the grave and we have done everything we were supposed to do," said Thompson's attorney Andrea Simmons. "I've gotten the department of health permit, we have no objections from family members and we are hopeful the court will do the right thing."

RELATED: Exhumation of gangster John Dillinger is no-go for next week

Dillinger kin could file another lawsuit, challenging the cemetery under a different state law. It wasn't immediately known whether that was an option for Dillinger's nephew or whether he will appeal the Wednesday decision.

"We will be exploring other legal options that are available to us, and expect to have a plan in place within the next few weeks" Simmons told the I-Team Wednesday evening.

"If his uncle was anonymous if no one had ever heard the name we wouldn't be here today because Crown Hill or any other cemetery in Indiana would've worked with the family to get it done" she said.

The identity of the deceased occupant beneath Dillinger's tombstone has been fodder for conspiracy theorists for decades.

Thompson claims that there is an impostor 6 feet under an unusual, buried concrete slab and metal shelf. He said there is evidence to support that contention, which was to be revealed by a cable TV network that originally partnered on the exhumation.

After the legal challenge and bad publicity surrounding the project, the cable network pulled out - but Thompson was going to proceed on his own.

His contention that the man FBI agents fatally shot in Chicago on July 22, 1934, wasn't Dillinger has been vigorously opposed by the FBI. The Bureau has put out numerous statements pushing back on claims that someone other than Dillinger was cut down that summertime day outside the Biograph.

The FBI cites "a wealth of information," including photos and fingerprint matches.

Some Dillinger relatives do oppose digging up the body - and showed up Wednesday in court.

"The dead should be left alone" said Stephanie Samuels, Dillinger's great-great niece. "This should never have gotten this far. I think it's very disgraceful."