According to a statement from the OCGOP, Ernby died unexpectedly after what was described as a "brief illness."
KABC 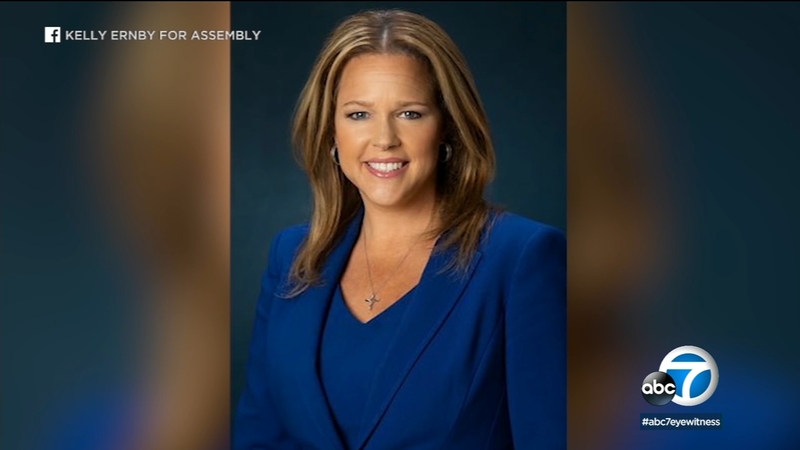 ORANGE COUNTY, Calif. -- Orange County Deputy District Attorney Kelly Ernby, who ran for state Assembly as a Republican and had recently been vocal about her opposition to California's vaccine mandates, died of COVID-19. She was 46.

According to a statement released by the Republican Party of Orange County on Monday, Ernby died "unexpectedly" after what was described as a "brief illness."

It is with great sadness to share that our Precinct Operations Chair, Kelly Ernby, has passed unexpectedly after brief illness.

The statement didn't say when she died.

"I lost a dear friend to Covid complications," Ben Chapman, chair of the Greater Costa Mesa Republicans, said on Twitter. "You've been nothing but an inspiration to many of us here in Orange County." "My heart is broken and I'm in tears," he wrote.

My heart is broken and I'm in tears. I lost a dear friend to Covid complications. I love you @KellyErnby ! You’ve been nothing but an inspiration to many of us here in Orange County. 🥺🙏🥺 pic.twitter.com/5WEC11uk8y

Ernby, who lived in Huntington Beach, ran for the 74th Assembly District seat in 2020 as a "pro-business, pro-taxpayer, political outsider" who wanted to "bring back conservative values in California."

After losing her primary bid, she became active in local GOP politics, taking on leadership roles for the party's Precinct Operations and Voter Registration committees.

"The Republican Party of Orange County is greater because of Kelly Ernby and her passing leaves a giant void for all of Orange County," read the statement. "While Kelly is no longer with us, her fighting spirit will live on through our entire OC GOP family. We will honor her memory by redoubling our precinct efforts. We have hope in this tragedy because we know she had a deep faith; it also reminds all of us to be generous and kind with one another as we never know when it may be the last time we see them. Our thoughts and prayers are with her loved ones."

Ernby was adamant about her stance against vaccine mandates since before the pandemic and as recently as last month.

In 2019, Ernby said she saw mandates as a compromise to freedom.

"It's not about being anti-vaccine, it's about being the choice to choose, and not all vaccines are the same," said Ernby during an online town hall meeting with Mark Newgent, a former city council candidate in Irvine and another prominent southern California Republican.

Ernby did not publicly disclose whether or not she was vaccinated against the virus. Spitzer told Eyewitness News he didn't know that information either, but mentioned Ernby's death has since sparked a conversation about the COVID vaccine amongst his friends and colleagues.

"Their question to me is, 'How can we get more people to get their vaccinations?' ... Especially in light of Kelly's death," he said.

When asked if it bothered him that Ernby's stance on COVID vaccine mandates may play a role in how she'll be remembered, Spitzer said "that should not be her legacy at all."

"You know, the comments on social media ... people have been texting me just utterly disgusted about some of the comments about [Ernby] and her life decisions ... almost as if she deserved her fate because she took a particular position," said Spitzer. "People make decisions, and obviously, with health, people have to suffer those consequences. But that should not be her legacy at all."

Ernby was widely expected to run again for state office in 2022. She is survived by her husband, Axel. The two did not have children.