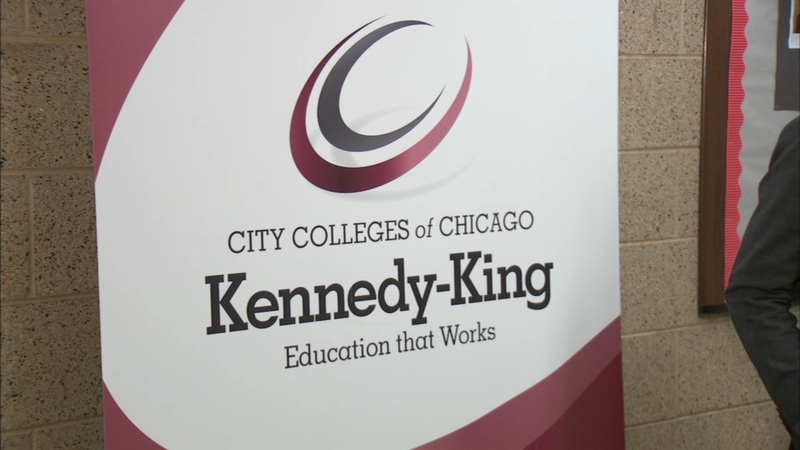 CHICAGO (WLS) -- The valedictorian and salutatorian from Kennedy-King College's class of 2019 come from different generations, but they both find inspiration in a common source: family.

Valedictorian Cindy Alvarez went back to college 20 years after graduating from Lane Tech. In the meantime, she got married and started a family.

It was her desire to set an example for her kids that lead Alvarez to enroll in college.

"I walked into a few schools and walked back out," Alvarez said. "I was scared to take that step...I was at home and heard my children talking, and they were talking about the fear of taking that next step, and I said 'no.' I breathed really deep and walked into Kennedy-King and signed up."

Alvarez didn't just sign up - she excelled in her accounting and finance major. She is now making plans to continue her education.

"I have two big contenders, but I've been accepted to Loyola, St. Xavier and UIC, so I'm just narrowing it down," Alvarez said.

Alvarez's hard work inspired her son to enroll in Kennedy-King this fall.

Salutatorian Jacqueline Amezcua-Lopez said memories with her father led her to a career in the culinary arts.

"My dad, he would always pick us up and do a lot of the cooking," Amezcua-Lopez said. "He'd be like, 'I'm going to bake a cake'...He's mixing all these different things together to see what's the outcome, and I think I just like seeing that I can mix this and this and see what happens."

Amezcua-Lopez's father passed away when she was 13, but her childhood memories of her father's passion for baking rubbed off.

She said she hopes her baking skills and academic success makes her father and the rest of her family proud.

"They always knew that I liked doing this, but they never assumed that I was really passionate about it, so I think that he would just be proud in general," Amezcua-Lopez said.