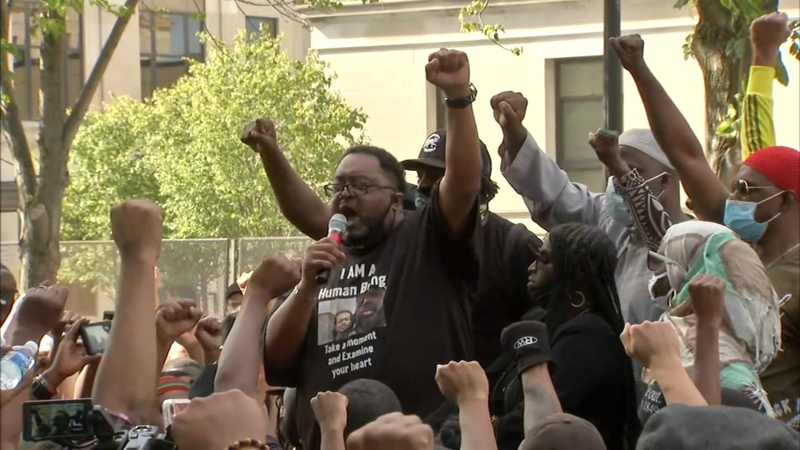 KENOSHA, Wis. (WLS) -- Family members of Jacob Blake, a Black man who was shot by police in Kenosha, Wisconsin held a "Justice for Jacob" march and rally Saturday afternoon.

The peaceful demonstration was joined by Wisconsin Lt. Gov. Mandela Barnes, Congresswoman Gwen Moore, and a host of activists and supporters.

Handcuffs have been removed from Jacob Blake's hospital bed and a warrant for his arrest has been vacated, his laywer said.

Jacob Blake's father told the crowd in Kenosha that it's his job to stand up for his son.

Thousands of people marched through the streets of Kenosha demanding justice for Jacob Blake Saturday.

People have been on the streets protesting since Blake was shot by a Kenosha police officer on Sunday. Blake's family says he's paralyzed from the waist down.

"There was no excuse to shoot Jacob Blake in the back seven times," said Tio Hardiman, executive director of Violence Interrupters. "No excuse at all."

"He is not Ahmaud Arbery, Philando Castile, Breonna Taylor. He is going to be here to be able to share his experience," Kenosha resident Tyrone Payton said.

"Until you put on this brown suit, you will never understand the fear of the bubble gum lights," Blake Sr. said.
Blake's father said he wants to put an end to police violence in Kenosha and the country.

Blake's father is encouraging people to continue protesting peacefully, and said he does not want people to tear down the city. A curfew remains in place.

While the size of the marching movement in Kenosha dwindled Friday night, their determination was relentless.