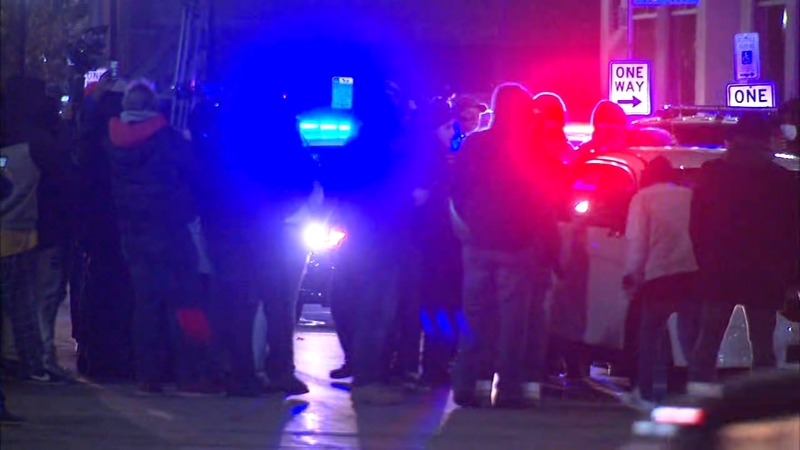 KENOSHA, Wis. (WLS) -- Though supporters and detractors had gathered outside Kenosha's courthouse Friday, no protests materialized Friday after Kyle Rittenhouse was acquitted of all charges.

The small group of protesters, who had gathered daily outside during the trial, had grown larger in the four days during which the jury deliberated.

A handful of demonstrators remained gathered outside the Kenosha courthouse well into Friday night, with tensions sometimes growing between Rittenhouse's supporters and protesters, but large scale demonstrations failed to materialize.

Justin Blake, uncle to Jacob Blake, was at the courthouse daily leading the small group of protesters who demanded Rittenhouse be convicted. He was disappointed in the jury's decision.

"For this to happen in 2021 is upsetting to us, and it should be upsetting for everyone," he said Friday. "This will go around the world. We can no longer say a damn thing at any international meeting about human rights."

RELATED: How the victims were depicted during the Kyle Rittenhouse trial

"It's disheartening to know this system still does not work for justice," added Bishop Travis Grant of Rainbow PUSH. "It's a miscarriage of justice."
Rittenhouse's supporters, who scuffled with the protesters during deliberations, also turned up. They included Mark McCloskey, who gained notoriety by aiming weapons at protesters from his front lawn last summer.

Wisconsin Governor Tony Evers had activated 500 National Guard members to be prepared for duty in Kenosha if requested by local law enforcement.

"Kenoshans are strong, resilient, and have worked hard to heal and rebuild together over the past year," Gov. Evers tweeted Tuesday. "Any efforts to sow division and hinder that healing are unwelcome in Kenosha and Wisconsin."

But despite high emotions, the city that braced for violence remains peaceful.

There are two protests planned over the verdict in Chicago. The first, called "The People Say Guilty!" will be held Friday at 6 p.m. in Federal Plaza, organized by the Party for Socialism and Liberation. A few dozen protesters attended and marched briefly through the Loop. As of 8:30 p.m. a couple dozen remained in Federal Plaza.

A few dozen protesters marched through the Loop Friday after Kyle Rittenhouse was found not guilty.