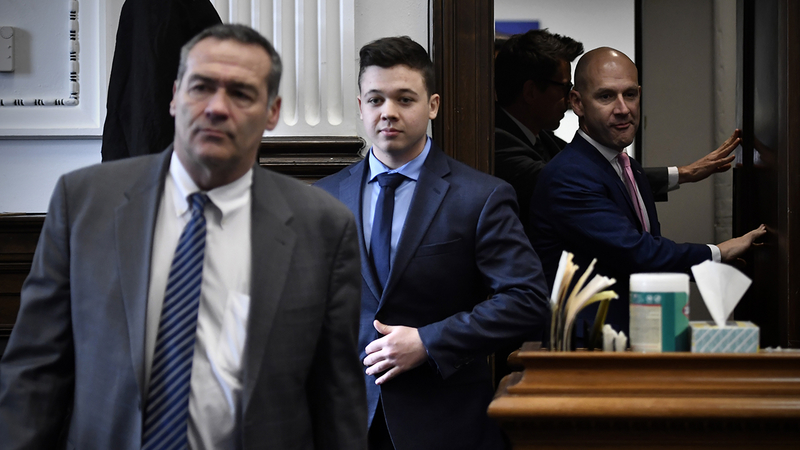 The family of Anthony Huber, one of the men he killed, is adding Rittenhouse to their civil lawsuit.

Rittenhouse was found not guilty of five charges related to killing Huber, Joseph Rosenbaum and injuring one other person.

RELATED: Kyle Rittenhouse shooting victim's father responds to verdict: 'We relived his death all over again'

Although lawyers convinced a jury that it was in self-defense, the burden of proof is very different in a civil case.

It could prevent him from making personal profit and gain from the shootings, including any possible book deals or speaking engagements, CNN reported.

A spokesperson for Rittenhouse did not respond to a request for comment from the Washington Post regarding the civil suit, who broke the story.

Earlier this week, Rittenhouse's attorney Mark Richards filed paperwork with the Kenosha County Circuit Court on Wednesday seeking the return of the items, explaining that Rittenhouse wants the AR-15-style rifle back so that it can be destroyed, the Kenosha News reported. He also wants the clothing he was wearing the night of the shootings returned.

Law enforcement has had the gun since the day after Rittenhouse shot three men, two of them fatally, on Aug. 25, 2020, during a night of protests and unrest in the southeastern Wisconsin city of Kenosha over the shooting of a Black man, Jacob Blake, by a white police officer.

Rittenhouse turned himself in to police in his then-hometown of Antioch, Illinois, within hours of the shootings. In November, the 19-year-old was found not guilty of all charges related to the shooting deaths of Joseph Rosenbaum and Anthony Huber and the wounding of Gaige Grosskreutz. Conservatives and gun rights advocates rallied around Rittenhouse in the days after his arrest, saying he was defending Kenosha from far-left militants. Others painted him as a trigger-happy vigilante.

Rittenhouse family spokesman David Hancock said Thursday that Rittenhouse wants to destroy the rifle and plans to throw out his clothing so that no one can use any of it to "celebrate" the shootings.

"At the end of the day, two people did lose their lives, period," Hancock said. "That weapon was involved in that. That weapon doesn't belong on a mantle. It doesn't belong in a museum. It belongs where Kyle wants it, and Kyle wants it destroyed. ... There's plenty of people out there who would like to hold these items up, on both sides. That's nothing Kyle's interested in."

Rittenhouse said he went to Kenosha to protect property from rioters and that he acted in self-defense after he came under attack and feared for his life.

Prosecutors portrayed Rittenhouse as a "wannabe soldier" who had gone looking for trouble, while his supporters regarded him as a patriot who took a stand against lawlessness.

The gun was purchased by Dominick Black for Rittenhouse, who was 17 at the time and unable to legally buy a gun and "was to become the legal property of Kyle Rittenhouse upon his 18th birthday," which was Jan. 3, 2021, the motion stated.

Earlier this month, Black pleaded guilty to two citations for contributing to the delinquency of a minor in exchange for prosecutors dropping two felony charges of intent to sell a dangerous weapon to a person younger than 18.

According to court documents, Rittenhouse is also looking to retrieve the ammunition, the sling and the magazine from the firearm, his cellphone, a cloth face mask, the clothing he was wearing the night of the shootings and a $1 bill.

A court hearing on the motion is scheduled for Jan. 28.